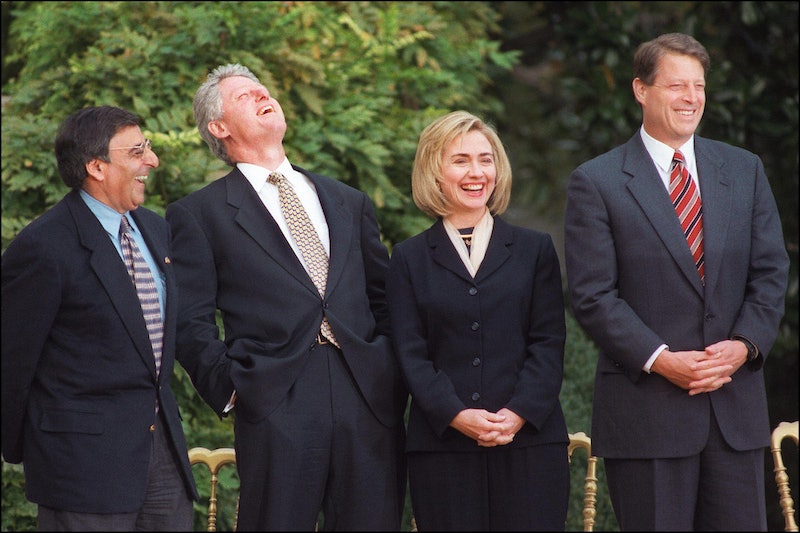 Democrats are getting some added star power as they eye the November election. According to CNN, Al Gore will campaign with Hillary Clinton. Though Gore had endorsed the former Secretary of State in July, he'd been otherwise relatively silent on Clinton's presidential run. He did not even attend the Democratic National Convention in Philadelphia this past July. Now, it seems, Bill Clinton's VP is ready to take action.

For weeks, Gore had been rumored to be joining Clinton for campaign appearances in order to court millennial voters and further discuss global warming. Due to his ongoing fight against climate change and his experience during the 2000 campaign, it only makes sense that the environmentalist publicly appear with Clinton. During the 2000 election, Gore saw his fair share of third-party animosity, with Ralph Nader's Green party run considered to be one of the deciding factors in Gore's loss against George W. Bush. After leaving politics, Gore set his sights on exposing the dangers of fossil fuels with the groundbreaking documentary An Inconvenient Truth. The news came to light shortly before the lone vice presidential debate, held on Tuesday night at Longwood University in Farmville, Virginia.

In many ways, Gore's role on the campaign trail may mirror that of Bernie Sanders. The Vermont senator has been a key player in helping Clinton unveil her debt-free college policies, appearing at a rally at the University of New Hampshire on Sept. 28 to voice his support. It was a policy Sanders had been championing during his own presidential campaign before acquiescing to Clinton and throwing his support behind her. Sanders' live tweeting of the first presidential debate was similar in tone to Gore's endorsement of Clinton.

Gore took to Twitter to issue his endorsement in July:

"Given her qualifications and experience and given the significant challenges facing our nation and the world, including, especially, the global climate crisis, I encourage everyone else to do the same," Gore said in a series of tweets.

It's unclear when Gore will be joining Clinton for a campaign appearance, though CNN reports that such an event will likely take place "in the coming weeks." Given Sanders' neighboring state advantage for the aforementioned University of New Hampshire rally, perhaps a Tennessee event will be planned to capitalize on Gore's lengthy political career serving the citizens of the Volunteer State. As of this writing, the Clinton campaign have no events scheduled in Tennessee.