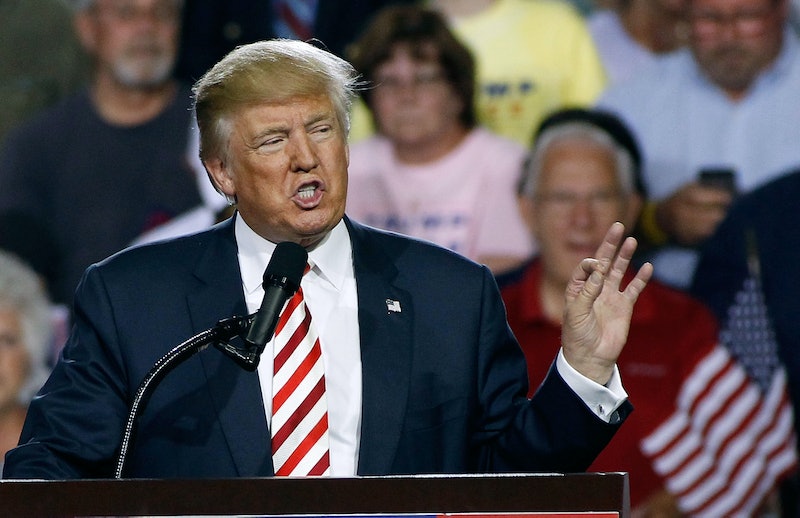 At this point in the election cycle, it basically feels like it is just a matter of time before all of us (especially those of us who aren't straight, white, privileged, and in possession of large breasts) are insulted by Donald Trump. His demeaning comments have become so common that many of us have become numb to the bigotry. That's why his most recent comments on mental illness among people in the military didn't necessarily shock, even if they did hurt. On Monday, Trump spoke at the Retired American Warriors Political Action Committee, where he told the crowd,"When you talk about the mental health problems, when people come back from war and combat, they see things that maybe a lot of the folks in this room have seen many times over. And you're strong and you can handle it, but a lot of people can't handle it."

In my eyes, the most perplexing part of Trump indicating that people with mental illness aren't "strong" may be that Trump was actually employing this oversimplified and incredibly insensitive understanding of mental illnesses to argue for better care for individuals suffering from diseases like post-traumatic stress disorder and clinical depression. He went on to say, "Now we need a mental health help and medical. And it’s one of the things that I think is least addressed and is one of the things that — like your question — one of the things that I hear the most about when I go around and talk to the veterans. So we’re going to have a very, very robust, level of performance having to do with mental health." He concluded by saying that many mental health problems were going untreated due to "what could be a simple procedure, what could be a simple prescription." While I support better mental health care for veterans, Trump's simplified view of the issue — that it doesn't afflict the strong, and that it can be erased by "a simple prescription" — overshadows any supposed advocacy for this care.

While calling for greater access to mental health care is always a step in the right direction, it's highly disturbing to me to see that the very people who claim to care about the issue of mental illness in this country are actually the ones who are destructively perpetuating the stigma around mental illness. Such an non-nuanced perception of the issue would likely come with similarly obtuse policies to address it.

Even scarier is the fact that Trump doesn't even realize he's messing with people's heads — based on his comments, it seems that he genuinely believes that mental illness is a product of weakness, and he suggests that we put more money and time into programs that will help these emotionally delicate people. But mental illness is not a product of weakness. It is a disease, like diabetes or asthma, and should be treated as such, not as a failure of character. I would know.

As someone who has wrestled with an anxiety disorder and binge eating disorder (BED) since my teenage years, I can't say this is the first time I've been accused of being a frail, pathetic baby who needs to buck up when the going gets tough. In fact, I've been insulted in this way many times before. After a severe anxiety attack landed me in the student clinic during college, a professor told me I needed to "get used to stress" and "better learn how to handle it." A few years later, my cousin claimed that my wrestle with BED was nothing more than a gluttonous attempt at "eating all that junk food." People with mental illness have been facing these kinds of comments that belittle their struggles since the dawn of time.

However, this particular jab from Trump does much more than insult me (and individuals everywhere who are fighting mental illness). It prolongs the harmful message our society is sending to the 42.5 million Americans who are struggling with diseases like depression, bipolar disorder, or schizophrenia: that there is help out there for you, but only because you're too weak to face the problems that life throws at you; that our country is trying to improve mental health help programs, but only because you're too fragile to take care of yourself. It's a humiliating message that will only turn more people away from seeking the help they desperately need.

The stigma mentally ill individuals face is already potent enough, and it's been a serious issue for some time now. In 1999, the U.S. Surgeon General said that stigma is the biggest barrier to creating comprehensive mental health care. We learn from a young age how to separate "normal" people from those with a mental illness by calling them "crazy" or "insane." This kind of social rejection happens well into adulthood, so we end up isolating people who are suffering and we drive them further away from getting help. As a result, they only get sicker and sicker, just like a flu can eventually develop into pneumonia if people sick with that virus don't get treated from the start.

When someone as visible as the Republican presidential candidate says something like mentally ill people aren't "strong" enough, it's clear to see that the stigma around mental illness isn't going anywhere anytime soon. Even though I've invested a lot of time and effort into taking care of myself and my mental illness over the past few years, simply hearing those words come out of Trump's mouth made me feel suddenly embarrassed for reaching out in the past when I was in a very bad place. I knew he was utterly and completely wrong, yet I couldn't help but feel sheepish for a second, like I had been a fool for asking my doctor for a recommendation for a therapist all those years ago.

I realized quickly that this was such an absurd thing to feel, though, because there is no braver act than speaking up about your mental illness and asking for help. There's nothing weak about being brutally honest about your pain, because trust me, there is real, tangible, all-encompassing pain that comes with mental illness. It's not a choice to be sick, just like it's not a choice to have cancer. Furthermore, people in the military may choose to fight for their country, but they, like the rest of us, definitely don't choose to experience mental illness. This is the truth we need to start spreading, rather than listening to the harmful and incorrect trash that comes out of Trump's mouth.

We'll never eradicate mental illness stigma overnight, but we can take baby steps each day to ensure that we chip at it on a regular basis. Next time you hear someone talking in this way about a person struggling with depression — or PTSD, or bipolar disorder — speak up. Set the record straight as often as you can, because so many people's lives depend on it.