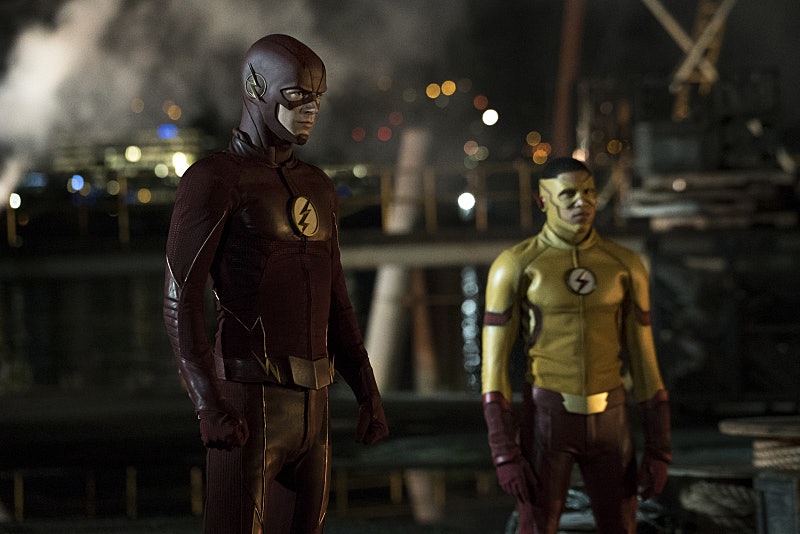 Barry Allen got a taste of what his life could have been in the Season 3 premiere of The Flash , "Flashpoint." After saving his mother from the Reverse Flash, Barry found himself in a world where both his parents were alive, he doesn't even know Iris and Joe West, and Wally West is The Flash — or, Kid Flash. At the end of the season premiere, Barry was able to return to his timeline, though not without consequence. The episode ended with a man, Edward Clariss, being woken up in the middle of the night by a disembodied voice and a message on his bathroom mirror: Alchemy. So, what does Alchemy mean on The Flash ? Could this be the birth of a new villain or a new ally?

Before we get to Alchemy, let's talk Edward Clariss. Edward Clariss first showed up in the "Flashpoint" universe as Kid Flash's great rival: a fellow speedster named simply The Rival. Faster than Kid Flash, The Rival is sort of like Flashpoint's own Zoom — he even wears a black suit — unbeatable and vicious. After seeing Kid Flash and The Rival fight in Central City, Barry ditched his new identity as plain old Barry Allen and revealed himself as The Flash to Iris and Wally, convincing them to fight The Rival together. When Barry and Wally went to confront The Rival, he introduced himself as Edward Clariss, and then proceeded to stab Wally and nearly defeat Barry. Barry was able to defeat him in the end, but The Rival injured Wally so badly, his rapid healing wasn't working.

Now for the message: Alchemy, which was very creepily scratched into his bathroom mirror in the new Flash Season 3 timeline, and "Wake up, Clariss," which was said by the disembodied voice. Alchemy is actually a hint as to Clariss' identity as a potential villain. In the comics, Dr. Alchemy is a supervillain and foe of The Flash. It's unclear whether or not Clariss is actually going to be Dr. Alchemy, or if the message was left by Dr. Alchemy. If Alchemy was the signature, that suggests that he wants Clariss to "wake up" — I assume that means to remember previous lives, like his life as a villain in Flashpoint.

Whatever the message to Clariss really means, it can't be good for Barry.