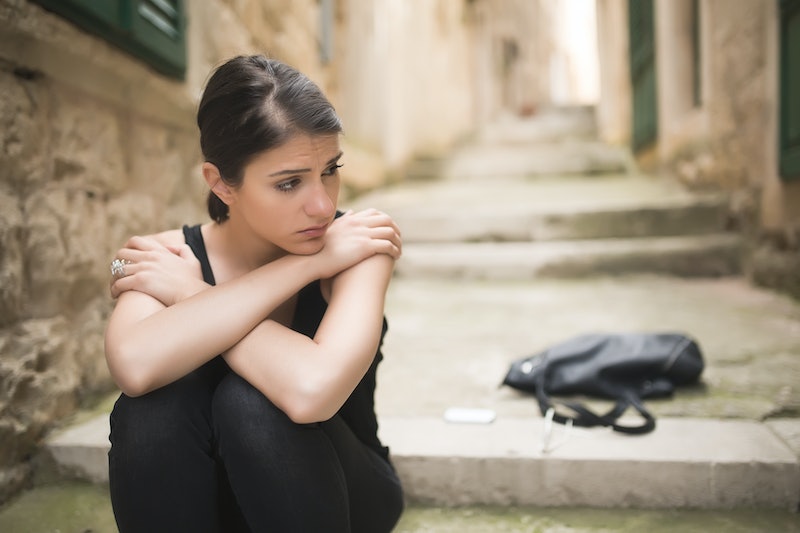 Breaking up is never easy, and research has even found that breaking up can literally break your heart. However, a recent poll of 4,500 18 to 34-year-olds from social polling app, WINQ, found that 44 percent of people say they get over breakups easily. Truthfully, everyone copes with breakups in different ways. But why does it seem that some people have an easier time getting over them and moving on while others seem to get stuck in a lovelorn state?

“People are hardwired to respond to loss differently. Some people crumble and others become stoic, and some people know how to grieve intensely, let go and move on,” Dr. Jennifer Freed, PhD tells Bustle. “People who get stuck in loss are usually involuntarily or unconsciously repeating a story of victimhood over and over again, and have friends or influences that help keep them in the drama of ‘poor, pitiful me.’”

According to therapists, your inability to move on from heartbreak is determined by your attachment style, which is developed in infancy and reinforced by the way your parents separated and reunited with you. Sound familiar?

If you had plenty of separations with no preparation and ways of staying in touch, chances are you developed an insecure anxious attachment, Licensed Psychologist, Jeanette Raymond, Ph.D. tells Bustle. "[Because of that], you fret during separations and can’t let go, longing for the loved one to return and make you feel safe and cared for again.” People in this category tend to have the most difficulty getting over breakups just because they’re wired to keep trying to get their loved one to come back. On the other hand, people who get over breakups easier have two very different attachment styles: Secure and Fearful.

According to Raymond, secure attachment is the healthiest among all and those who experience it as infants develop a solid sense of trust and sense of self worth that allows them to separate and begin again. “They don't see it as the end of the world,” Raymond says.

Those with avoidant or fearful attachment also find it easy to break up because attachments aren’t comfortable. “They are less intimate and more distant in the first place. So when the break up comes it can be a relief, tinged with sadness. But they are safe and in control," Raymond says.

It makes complete sense. But that’s just the psychology of it all. What about the biological factors that make breaking up easy or hard to do? After all, breakups are known to affect your brain chemistry in different ways. Are some people just “hardwired” to get over breakups easily? I talked to several experts to get the details behind the biology of getting over breakups and why some people have it easier while others don’t. Here’s what they had to say:

1. It’s All About Temperament

Much of how we form relationships is biologically driven and getting over an event like a breakup really depends on temperament, which is the biological component of personality, Monte Drenner, a licensed counselor and life coach, tells Bustle.“Some temperaments are hardwired to seek out attention and emotional connection with others while some temperaments are hardwired to be more independent and isolate,” Drenner says. “People with temperaments that thrive on emotional connection will very often have difficulty getting past a breakup and often get stuck in a lovelorn state while others that are wired to be more independent can move on more quickly.”

2. How A Person Behaves Following A Breakup Has More To Do With Their Getting Over It Than Anything Else

Brain chemistry that creates serotonin and dopamine is heavily influenced by what we do and how we talk to ourselves. “People do not realize how much control they actually can have,” Dr. Paul DePompo, board certified cognitive therapist and author of the book The Other Woman, tells Bustle “People who face the things they are avoiding, push themselves to engage in pleasurable things alone or with others, and increase the little things that give that small sense of accomplishment do way better at moving on. Too often people avoid getting themselves on a track to being their best.”

“In other words, they don’t bond as much in the relationship, which make leaving the relationship not as difficult,” Dawn Maslar, M.S., author of Men Chase, Women Choose: The Neuroscience of Meeting, Dating, Losing Your Mind, and Finding True Love, tells Bustle.

Regardless of what’s going on inside, we all know breakups happen whether we initiate them or not. But just remember, there are so many healthy ways to get over it and move on.