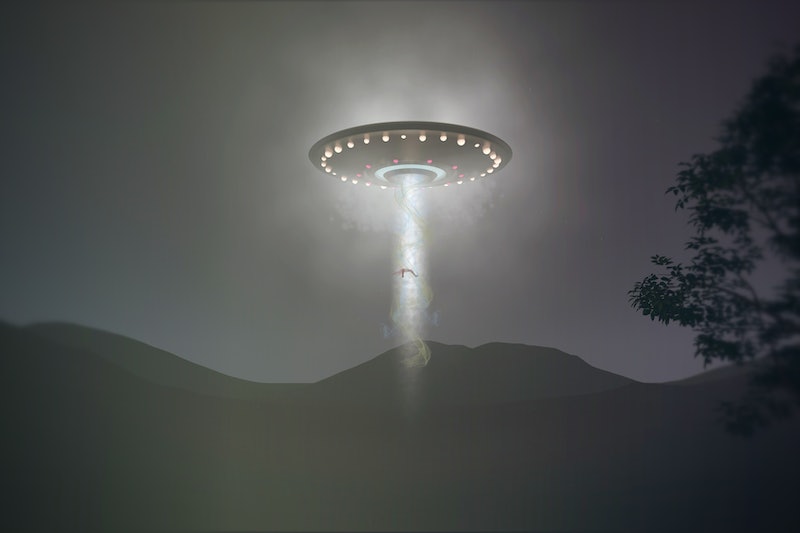 When I think of my childhood, three things in particular come to mind: the best cartoons ever, tea parties where I spent a ridiculous amount of time talking to inanimate objects, and the weirdest unexplained mysteries of the '90s that absolutely flooded the media. Back then, we didn't have Facebook to update us with the news; you had to turn on the TV (which often required getting up and actually walking to the TV), find the right news channel, and hope you didn't already miss all the juicy details. Then, your parents would discuss the strange happenings during the commercial break while you pretended to know what was going on, all the while wishing they'd put Nickelodeon back on, because Rugrats.

There were a number of mysteries that took over the TV during the '90s; and those mysteries still baffle us to this day. Kidnappings, murders, and claims of UFO and alien sightings — no one can argue that the '90s were uneventful. While we might not have understood them as kids, these stories certainly are kind of creepy now. The stories might be old, and the evidence might be telling; but regardless, these seven mysteries remain unsolved, unanswered, often incredibly sad, and totally weird.

1. The Abduction Of Amber Hagerman

On Jan. 15, 1996, nine-year-old Amber Hagerman disappeared while riding her bike in Arlington, Texas. The search to find her was so big that the FBI was brought in. Four days after her disappearance, a man walking his dog found her body. Authorities were able to determine that she had been alive for two days before her murder. The high-profile case dominated the media, and Hagerman's parents fought to prevent a crime like it from happening ever again. This was the beginning of the AMBER Alert — America's Missing: Broadcasting Emergency Response.

On the evening of March 13, 1997, thousands of people across Nevada and Arizona witnessed a series of bizarre lights forming the shape of a V. Other reports claim orbs and triangles in the sky. Dana Valentine and his dad watched in amazement, with Valentine saying, "We could see the outline of a mass behind the lights, but you couldn't actually see the mass. It was more like a gray distortion of the night sky, wavy. I don't know exactly what it was, but I know it's not a technology the public has heard of before." According to Valentine, the lights passed directly above them, at a distance of about 500 feet. It was later explained as diversionary flares released by pilots during a training run, but many aren't satisfied with this story.

It can be argued that the biggest unsolved mystery of the '90s (and to this day) is that of the murder of JonBenet Ramsey. Ramsey was found dead in her family's home on Dec. 26, 1996, just a few months after turning 6 years old. A ransom note was left behind. While the police have a DNA composite of the murderer, it remains unsolved.

At the end of March 1993, a mass UFO sighting occurred in the United Kingdom, which later became known as the Cosford Incident or the British UFO Mystery. Over the span of a couple days, hundreds of people (including military and police) reported seeing a triangular or diamond-shaped craft with white lights at each point. Several reports specified that the UFO hovered as close as 200 to 400 feet from the ground, with some witnesses believing it had actually landed. One family tried to chase it down in their car, with no luck. They described the sound the supposed craft made as a "low humming sound ... you didn't just hear the sound. You actually felt it, like standing in front of a bass speaker."

Tupac was a top-selling rapper when he was shot in a drive-by in Las Vegas on Sept. 7, 1996, after the Mike Tyson/Bruce Seldon fight at the MGM Grand. While in the hospital, his health improved; sadly, though, he died of internal bleeding on Sept. 13. You'd think that with the shooting happening in public and on a busy Vegas street, someone would have some answers — but no suspects were ever arrested for his murder.

6. The Children Of Ariel School

On Sept. 16, 1994, children at Ariel School in Ruwa, Zimbabwe were playing outside when they saw three silver balls in the sky over the building. In a flash of light, they disappeared, showing up again in another spot. This continued to happen two more times, before the strange body moved closer to the school and landed or hovered nearby. Other witnesses reported seeing three objects flying overhead, red lights flashing. And, as if straight out of a sci-fi movie, some of the children reported seeing a small man appear on the top of the mysterious object. He was dressed in a shiny, tight black suit, and he had a thin neck, big eyes, pale face, and long black hair.

On Dec. 4, 1998, Yale student Suzanne Jovin dropped off a draft of her senior essay and then held a pizza party for their local chapter of Best Buddies, a group that worked with adults with disabilities. She was last seen around 9:25 at night, dropping off the keys to a car she had borrowed for the party. Just 30 minutes later, she was found stabbed to death — with 17 wounds to her back, head, and neck — near the campus in New Haven, Conn. To this day, people are still investigating Jovin's case.