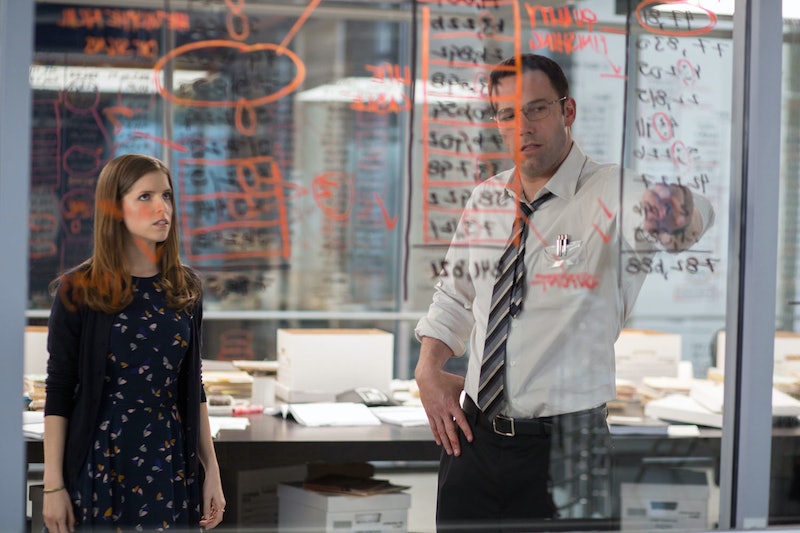 When you first heard that Ben Affleck was playing a math genius in The Accountant , you probably were intrigued — and wondered if it was just a Good Will Hunting remake. But no, the new film is a totally different story, with Affleck playing the genius mathematician and potential criminal mastermind Christian Wolff. Chris is an anti-social math savant who works as an accountant for some less than savory clients (think mob bosses and international criminals). The movie finds Chris as he's being investigated by the Treasury Department's Crime Enforcement Division, leaving him scrambling for legal cover. So, not really the kind of Affleck role fans are used to. But, Affleck aside, is The Accountant a true story?

The Accountant is not a true story or a biopic, but that's probably for the best. Based on the trailer, Chris is not only a precise mathematician, but someone who's equally good with a gun. Do we really need expert civilian geniuses with armories cooking the books for criminals in real life? So, while The Accountant isn't based on a true story, it does have a foothold in reality. Specifically, the film's writer Bill Debuque, director Gavin O'Connor, and star Affleck took great care to ensure that Chris' personality and mental state — he's described as having autism — felt as real as possible.

It's unclear how Chris' condition, which appears to affect him most socially, will be presented in the movie, whether he will be introduced as someone on the autism spectrum or without a specific diagnosis. However, it's clear O'Connor and Affleck took that aspect of the character seriously. "My intention and Ben's intention was to celebrate the character; and we did a massive amount of research to make sure that it was authentic and truthful," O'Connor said in an interview with ScreenRant.

In his effort to make sure the film's portrayal of autism was as authentic as possible, O'Connor told People that he screened the film for a few autism activists and organizations. In that same interview, Affleck revealed that his experience shooting The Accountant inspired him to have a conversation with his children about autism. "It gave me a good opportunity to just talk about how all of us are very different. All of us see the world in very different ways," Affleck told People. "And [autism is a] condition which makes you different, but can also make you special — and that can be really cool as well," he added.

The Accountant might not be a real story, but it could have some real effect on how autism is portrayed in Hollywood.