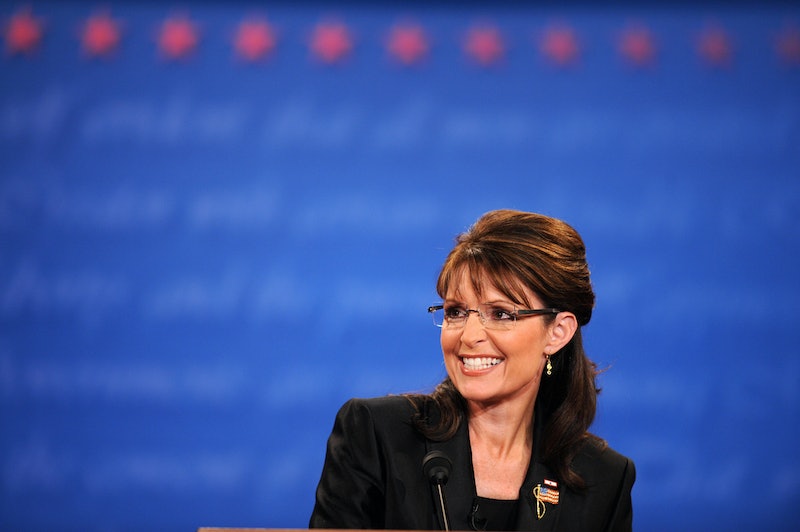 Everyone has their own perspective on last night's vice presidential debate, but one former vice presidential candidate from Alaska made an observation the rest of us seemed to have missed. That's right, folks — Sarah Palin's Facebook post about the VP debate actually made a really good point. This is not something I normally find myself saying about Sarah Palin — I am not generally someone who tends to agree with Sarah Palin on, well, anything — so perhaps this particular moment requires a little unpacking.

In other words, whether the debate commission thought about it or not, that means that Sarah Palin had to spend 90 minutes standing in heels, when literally every other debate that has happened in the past 16 years allowed the all-male participants — who were not wearing heels — to sit.

Like I said, I'm not used to agreeing with Sarah Palin, but spending 90 minutes standing still in heels — especially those heels — sounds terrible, even without also being expected to not get distracted by the discomfort while participating in a live, nationally televised debate.

If it were me, I would also be furious as hell at whatever GOP consultant or campaign aide picked out those shoes. I mean, I get wanting the visual of red heels, and at least they weren't too high. But they could have found her something with a wider base. Just look at these things.

But then this is the problem with being a woman in politics — or really anywhere else in the world. People expect you too look a certain way, to wear the right outfit and have the right hair and perfect makeup, and who cares if it's comfortable. Or, if we're getting down to it, affordable. The press made a big fuss over Sarah Palin's wardrobe spending in 2008, but whether or not the GOP's budget for her clothes was excessive, it's not as though women can simply show up to nearly every event in a suit the way men can.

Don't get me wrong; I am not a Palin fan when it comes to her policies. But let's not pretend that she wasn't subject to sexist assumptions and attacks. Because even when you don't agree with someone, that kind of treatment is still not OK.

And in this, she does have a point. Why was she expected to stand in heels for 90 minutes while the men in their much more comfortable shoes last night — and throughout recent history — were given the luxury of chairs? No matter what the answer is, it can't possibly be a good one.