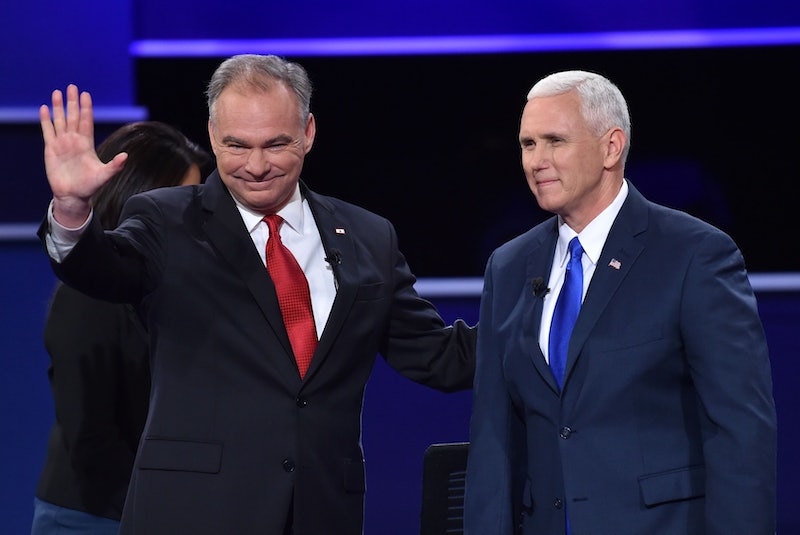 On Tuesday night, vice presidential candidates Tim Kaine and Mike Pence went head-to-head in the lone vice presidential debate of the 2016 election season. And while a lot of the evening focused on the two nominees discussing Donald Trump’s many missteps or Hillary Clinton’s alleged untrustworthiness, the pair also talked about a pretty touchy subject: faith.

Toward the end of the debate, the moderator asked the senators about how religion and their respective faiths impact the way they govern. And both had very different answers.

Kaine, who grew up with Irish-Catholic parents, said, "I try to practice my religion in a very devout way and follow the teachings of my church in my own personal life.” He added, "But I don't believe in this nation — a first amendment nation where we don't raise any religion over the other and we allow people to worship as they please — that the doctrines of any one religion should be mandated for everyone.”

Pence, Trump’s VP pick, had a different take on the issue, noting that his faith informs everything he does in his life. He then went on to explain how his faith has led him to strongly oppose abortion, quoting scripture to make his point.

“For me the sanctity of life proceeds out of the belief that ancient principle that where God says 'before you were formed in the womb I knew you,” he said. “And so for my first time in public life I sought to stand with grace compassion for the sanctity of life.”

Hearing the politicians speak about their faith in regard to politics made me think about my own religious beliefs and how they intersect with my political views. I consider myself an Independent, as my views can go either way — either liberal or conservative — but I usually lean toward the side of the Democrats.

As a devout Christian, I’ve often grappled with my faith in relation to politics. But as I grew older, and matured spiritually, I’ve taken a more Kaine-like view of things. My faith is the most important thing in my life, and I understand the same may be true for the millions of Americans who do not share my religion. But I’ve come to understand this truth: this nation is for everyone. Despite anyone’s personal beliefs or convictions (and contrary to how it appears sometimes), this nation is for all, not for one particular group. The First Amendment forbids congress from promoting one religion over another, and that’s how I view policy.

Pence and Kaine’s discussion about faith quickly became a discussion about abortion, and I take a Kaine-like stance on that as well. I am pro-choice. I know, I know. Typically, Christians are pro-life and are some of abortion’s most passionate opponents. But I believe a woman’s right to give or not give birth should be a personal one, and no legislation should play a role in what she does or does not do when it comes to her reproductive health.

Some would ask, “Well, doesn’t that conflict with your faith?” And, for me, the answer is no. The Bible is not as black and white as we would like to think, and Americans tend to have a more nuanced view of abortion. One situation even remotely resembling abortion appears in Numbers 5:18 in which the Lord told Moses that in the event a husband suspects his wife was unfaithful, he should take her to a high priest who would give the woman “bitter water” that — if she was guilty — would “make your womb miscarry and your abdomen swell.”

Even before I was mature enough to give deep thought to the issue, I found the idea of legislation limiting a person’s control over their own body absurd. And much like many of today’s societal issues, the Bible does not give firm, definite instruction about abortion.

When Emma Goldman and Margaret Sanger, some of birth control’s earliest proponents, began advocating for contraceptives and abortion in the 20th century, it was not with malicious intent. The women aimed for multiple things: to provide women a way to enjoy sex without having to worry about becoming pregnant, to help severely poor families already burdened with too many children, and to help said burdened women, who often turned to dangerous self-induced abortion.

I’ve never grappled with the issue of abortion and the like in regards to my faith, because, when I did begin to give it thought, my opinion was already formed. Many say the issue is one of morality, and those who picket outside of Planned Parenthood facilities do so because they believe abortion is murder. But it seems many pick and choose what we wish to be moral about.

Although reproductive rights ruled that portion of Pence and Kaine’s conversation, Kaine did note that he — a firm opponent of capital punishment — grappled with his stance on the death penalty as a Virginia senator.

“It was very, very difficult to allow executions to go forward but in circumstances where I didn't feel like there was a case for clemency I told Virginia voters I would uphold the law and I did. That was a real struggle,” Kaine said.

While my stance on abortion is firm, I can not say the same about my views on capital punishment. For the longest time, I haven’t been able to make up my mind about the death penalty. On one hand, I do not think anyone — any group, jury, judge, or anyone else — should be able to decide whether a person lives or dies. However, on the other hand, I’m sure that if I lost a loved one in a heinous, brutal murder — like many families have — I’d be more than eager to embrace the penalty.

So, ultimately, I don’t know what my stance is on the death penalty.

But one thing is for certain: I would never want my personal beliefs thrusted upon a nation of people. As I said above, this country is for everyone. And because not everyone is Christian, not everyone should have to live like one. Of course, I’d love if everyone followed Christ, but that’s not the world we live in.

Also, when it comes to Christian values, it seems as though many are eager to place them on everyone. Many Christians want the nation to abide by a set of Christian “rules” but are not eager to introduce people to Jesus. And Christianity without Jesus is not only pointless, but it’s no fun. If we truly want politics and Christianity to mesh, the answer is Jesus, not pushing for legislation to meet what we personally believe is right.

So, when it comes to my faith, I may be grappling with many things, but I know better than to attempt to force other people to live by my convictions.

I believe Kaine put it perfectly in the debate:

“[Clinton and I] really feel like you should live, fully and with enthusiasm in the commands of your faith,” he said. “But it not the role of the public servant to mandate that for everybody else.”