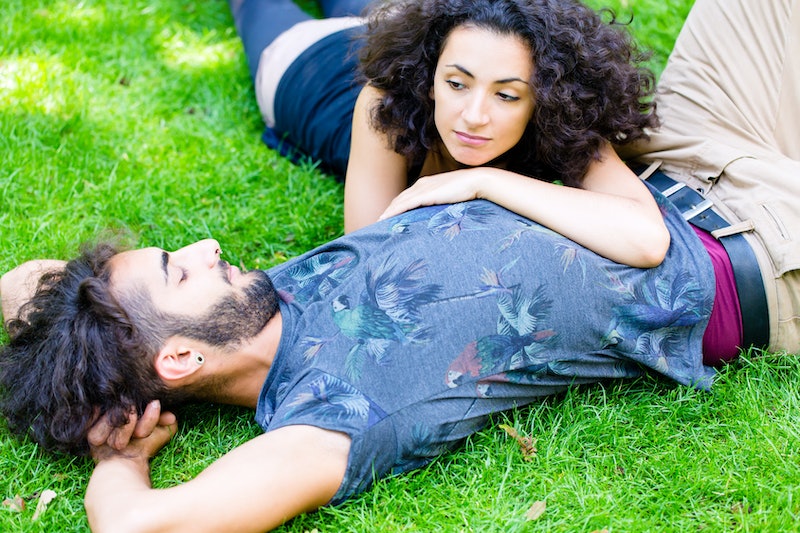 As a monogamous person, I'll admit that I'm pretty terrible at dealing with jealousy. Even though I've never been cheated on, I've gotten jealous of partners' exes and even their platonic friends. I couldn't imagine having to deal with the actual possibility of a partner hooking up with someone else. Yet poly couples experience this in relationships, so they must be onto something.

In case you're unfamiliar, polyamory is the practice of having a romantic or sexual relationship with more than one person with all parties' consent. Some poly people may have primary partners they're in relationships with and then see other people as well. Some may have many equally important partners at once. What they all have in common is that they haven't committed themselves to just one person, and everyone is cool with that.

Being polyamorous often requires resisting the desire to limit your partners' involvement with others, but that doesn't mean poly people don't feel jealous. It just means they're willing to talk about it honestly and manage it.

I asked poly people how they deal with jealousy and what advice they might offer others, both polyamorous and monogamous, on dealing with it themselves.

I look at jealousy as an effective signaling mechanism, but it can be quite dangerous if you let it overwhelm or control you. Jealousy signals that you've encountered a distinct gap between what you expected and what is actually happening. As a result, you may be feeling hurt, isolated, fearful, or resentful. But jealousy doesn't necessarily mean that something is wrong. It simply signals that your expectations were inaccurate.

For instance, if you and your partner agree to be monogamous, and a few weeks into the relationship, you see them making flirty eye contact with someone, you may immediately feel pangs of jealousy, but it's important to realize that you may simply have differing definitions of what monogamy is. Maybe monogamy for them means that you don't engage in physical/sexual contact with others, but that eye contact is perfectly benign.

Jealousy signals to you that you and your partner may have different ideas of what your relationship is supposed to be, so use it as an opportunity to spark a conversation that lets you get to know each other better and more fully understand one another's preferences and worldviews.

We handle our jealousy, though it is sometimes hard. We try to remember that we love each other and nothing will affect that. Even if we want someone else more than each other, we are still WE. Play is fun and the more, the merrier.

I cut down on a lot of jealousy by getting to know my metamours [a partner's partners]. When I'm on friendly terms with my metamours, my partner spending time with one of his or her other lovers gives me joy rather than anxiety. It also means the lines of communication are open, so if I have a hard day and they have a date, I can ask for my needs to be met without it feeling like a power play. Working together as a team has almost entirely made jealousy unnecessary.

To me, jealousy = fear of loss. So I most often see jealousy in myself or my partners when they are afraid of losing something in our relationship. It could be as small as an inside joke or a night out, or it could be fear of losing your place in your partner's life, or losing part of their love. A couple things help combat this jealousy: 1) absolute security that your long-term needs are being met by the relationship, and those needs are not under threat from new lovers or new partners. 2) Some level of what people in the poly community call "compersion" or viewing the new partners as a gain to the current relationship, not a threat.

I think some idealize the prospect of a relationship without jealousy. But I believe jealousy is not something to be ashamed of or to be avoided. It's really useful of where the insecurities in the relationships are, and can prompt a conversation to address them. It's worth noting we are all fighting against a lot of cultural cues (movies, books, etc.) that say jealousy is the appropriate and only response when your partner is with another.

Jealousy comes from insecurity. ... If jealousy arises, talk it out immediately — find out what the trigger is, how to re-establish security in the primary [relationship]. It is also vital to connect sexually only with those who completely respect the primacy of your relationship and are not looking to undermine it, compete, or poach. This will usually be other polyamorous couples, though there are also singles out there who really don't want the intensity of a full-on partnership but want something real and loving.

Be willing to do therapy and counseling at either partner's request. Handle any difficult feelings right away. Clear, direct communication will dispel false fears or show a crack in the relationship which needs to be addressed. Be ready to pull the wagons into a circle and move back into monogamy, single-focus if your primary relationship has issues arise. It also only works if both parties truly want it. If one is 'persuading' the other, the relationship won't survive that power imbalance. For any relationship to be successful, it takes an immense willingness to look at and work through your own stuff.

Monogamy is no less tricky to manage. Think: let's say you are a great cook and your partner adores your cooking. Then, one evening, s/he goes to a friend's house and has a great meal. Are you threatened? Doesn't have to be a big deal — that is just a cultural belief.

The key to managing jealousy is to make sure you're actually doing poly, versus. being one person in an 'open' relationship with two people. Often, one person wants to be with two, and the two are attracted to [the first one]. This is a recipe for disaster, as jealousy ensues, and the relationships fail.

There are six relationships in a poly triad (A-B, B-C, C-A, B-A, C-B, A-C). People tend to forget and focus on four of them. Unless you focus on all six, and unless all six are 'real,' what you have is one person in two relationships, and two people sharing a third relationship, rather than actual poly. In the triad, it helps if at least two of the people are bisexual, or at least 'bi pleasurable.' Like any other relationship problem, the first step to solving it is acknowledging you have it.

I had to do a lot of releasing, mostly through tears. I had to let go of my husband in order to truly love him.