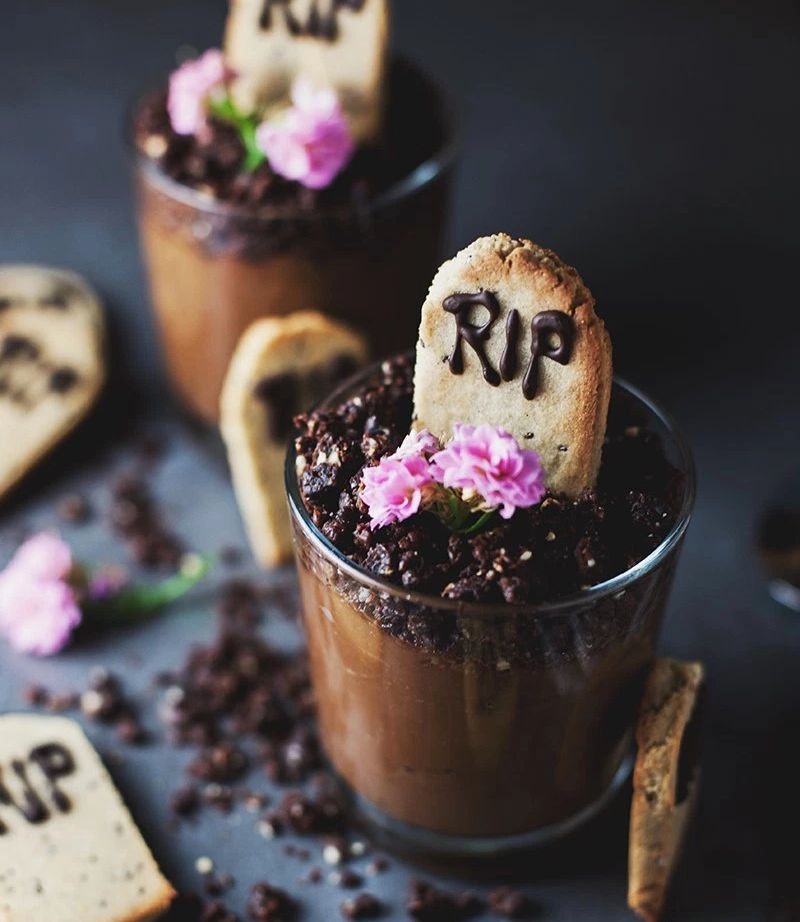 Aside from spooky décor and creative costumes, Halloween revolves around sweets. Lots of them. But when your diet does not include animal products, making vegan Halloween treats is probably on your list of things to do this fall. This type of activity is perfect for the vegan with a sweet tooth who misses things like chocolate, marshmallow fluff, and cheesecake.

Mouthwatering vegan desserts are not just for vegans, though. You might be surprised at how versatile (and tasty) these treats can be. They are all about raw, fresh ingredients with a focus on natural sources of sugar. To top it off, vegan desserts typically have more vitamins, protein, and fiber than their store-bought counterparts.

Making vegan recipes also allows you to embrace the world of food in a new light. For example, raw cashews can be used to create creamy ingredients like cream cheese. They can also be used to create a “white chocolate” when combined with coconut oil and agave. Chocolate crumbles can be made with ground almonds and cacao powder, while mashed avocado can create a rich pudding. Clearly, making vegan food requires creativity and I am all about it.

The only thing that can make it better is a seasonal spin. That is why I rounded up these 20 noteworthy Halloween treats that are easy to make and eat. It is the best way to please your sweet tooth while treating your body well.

The concept of pumpkin Snickers bars is mind blowing. Make it healthy, vegan, and gluten-free? I'm sold. Visit Emilie Eats to learn how to make this glorious concoction.

The Lazy Vegan Baker used avocado vanilla pudding and candy to create these gush-worthy cupcakes. These treats will be a hit with both kids and adults alike.

Thanks to mashed sweet potatoes, you can give your average cinnamon roll a fall touch. Top it off with a maple glaze and you've got yourself a seasonal dessert. Head to Fo Reals Life to learn how.

When it comes to Halloween, anything that has pumpkin gets two thumbs up. These fancy shmancy scones are no exception. Visit Fo Reals Life for the full tutorial.

Between the strawberry jelly "blood" and the almond "nails," these healthy witch finger cookies by Food Faith Fitness are brilliant. Just be sure to trade the honey for agave to make it vegan.

Chocolate cups aren't just for peanut butter, apparently. In this recipe, Elephantastic Vegan demonstrates how to use raspberries to create this bloody delicious dessert.

For a last minute vegan treat, check out Beard and Bonnet's clever popcorn idea. It's so easy to make that it's scary.

I couldn't help but include these peanut butter doughnuts by Fo Reals Life. I mean, just look at them. You can easily make them Halloween-themed by adding orange sprinkles or edible glitter.

Get in touch with your dark side with these graveyard mousse pots by Wallflower Kitchen. They boast healthy ingredients like ground almonds, arrowroot powder, and agave nectar. As for those tiny edible flowers? I'm in love.

For another quick and easy dessert, try making Wallflower Kitchen's vegan ghost cupcakes. It's amazing what you can do with a dollop of (vegan) marshmallow fluff and melted dairy-free chocolate.

Vegan Richa is at it again with vegan pumpkin goodness. How can you say no to that luscious tofu cream cheese filling?

This is one of those recipes that emphasizes the creative potential of food. Made with a raw cashew base, the layers of this cake are colored with ingredients like mango, turmeric, and carrots. So cool. Visit Unconventional Baker for the low down.

Wallflower Kitchen is at it again with these amazing skull candies. They're made of an amazing "white chocolate" coating consisting of raw cashews, coconut oil, agave, and almond milk. So cool.

Between the chocolate pumpkin filling and spiderweb design, this recipe by Unconventional Baker is a vegan's fall dream come true. Even the crust is made with pumpkin.

Treat your guests (and yourself) to a sweet pumpkin seed snack with this recipe by Wallflower Kitchen. This is an awesome way to re-use seeds from pumpkin carving.

For another gorgeous spiderweb creation, check out Texanerin Baking's cupcake recipe. These treats are grain-free and dairy-free. You can easily make them vegan by swapping out the honey for brown rice syrup or agave.

Cashew cheesecake makes another appearance in this classic version by Unconventional Baker. This one is paleo and gluten-free, too.

Candy bracelets get a healthy upgrade with Fork and Beans' brilliant tutorial. Try using different plant-based natural food colors to make a customized batch of beads. This would make for an amazing party activity, too.

Inspired by the popular candy bar, this granola recipe by Texanerin Baking is something out of a dream. Not only is it free of gluten and dairy, but it can be made whole grain and vegan. It's like a grown-up version of a childhood favorite.