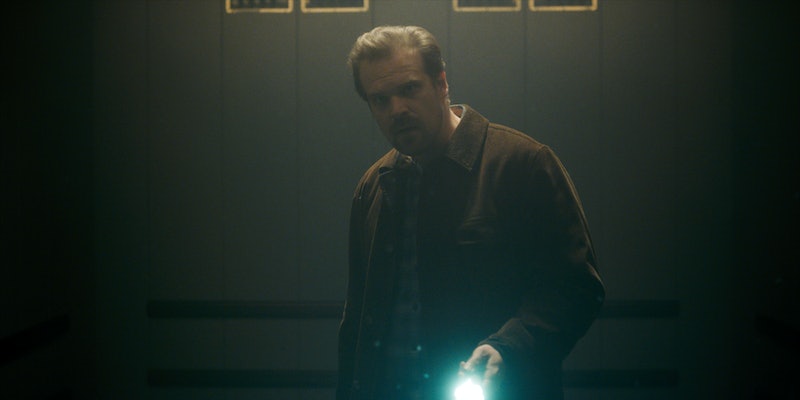 It's only been a few months since Stranger Things has premiered, but it has already become the defining television of experience of 2016 — the show that surprised everyone and became must-see tv soon after it hit Netflix. While it feels like a long wait until Stranger Things Season 2 , some of the cast recently visited New York Comic-Con to discuss the future of the show. The character with the most mystery surrounding them at the end of Season 1 is careless-turned-competent police chief Hopper, who is last seen getting into a government car with some mysterious suits and later dropping off Eggo waffles (Eleven's treat of choice) in a small box in the forest. When Bustle attended the Stranger Things NYCC panel, actor David Harbour gave some hints to the future of the show, but got suspiciously tight-lipped when someone asked if Hopper would adopt Eleven in Season 2 of Stranger Things .

Surely a plot development that large wouldn't be outright-spoiled at New York Comic-Con, but actors have ways of talking around the truth when it comes to television shows. The answer to the question of whether or not Hopper will adopt Eleven in the upcoming season of Stranger Things isn't revealed in his answer as much it's revealed in how he didn't answer the question.

When asked by a fan about being a possible father figure to Eleven, Harbour explained that couldn't reveal anything — which in the world of movies and television often means, You're on the right track, but we don't want to spoil it. Harbour then said, "There would be a rich emotional arc there that I would love to explore," in the type of exaggerated way that was basically the equivalent of a vocal wink.

Hopper taking Eleven in as his daughter, or even just acting as more of a guardian to her, would fit within what's already been established in Stranger Things, as many of his motivations throughout Season 1 are born from the loss of his daughter to cancer before his time as Hawkins Police Chief. Taking care of Eleven gives him another chance at being a father. This would also be hugely beneficial to Eleven, as the only father figure she's ever had was a cruel, messed-up, mad scientist who was only using her to try and access parallel dimensions and create some kind of super weapon. Hopper and Eleven are two lost souls in need of each other and they'd make quite a pair in Season 2, so I'm sure many fans are holding out for that rich emotional arc.