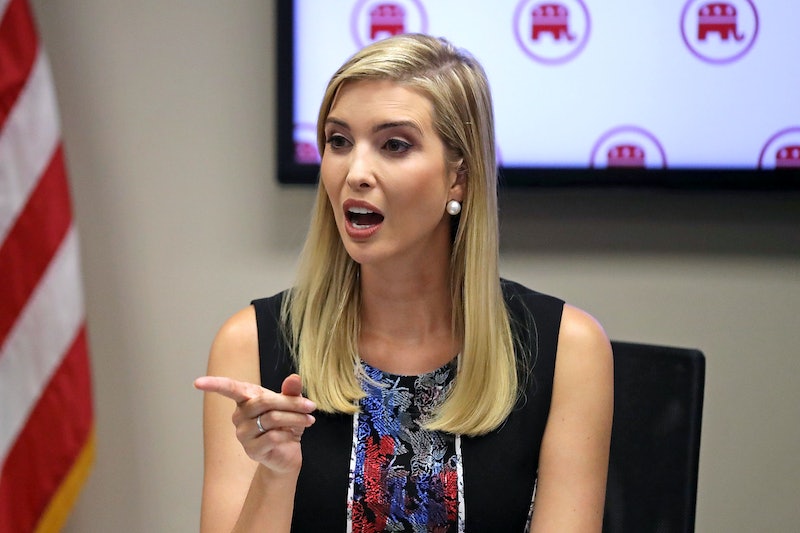 With the second debate happening Sunday night, there were plenty of questions leading up to it about what would go down. Would Donald Trump continue interrupting Hillary Clinton? Would Clinton wear one of her signature pantsuits? (Fingers crossed.) How soon into the conversation would the leaked Trump tapes be mentioned? Like I said, plenty of questions. Yet many people also were curious to know if Ivanka Trump is at the second debate, considering she's been a vocal supporter of her father. She attended the previous debate, plus she's been there through all the ups and downs of this campaign thus far, so showing up at the second debate would make sense.

In mid-September, Ivanka helped Trump launch his plan for working mothers (and in an interview with Cosmopolitan, excused herself from the call after some tough questions). Considering this plan may come up in conversation at the debate, it'd make sense that she would be there to root for her father from the audience, and that's exactly what she did. Yet for the same reason, it made total sense that Ivanka would've chosen to sit the debate out. Ivanka has yet to post on social media following the Trump tape leaks on Friday, in which he made potentially his most crude comments about women yet. (You can read the full transcript here.) She has also not publicly condemned Trump's comments, although her father's current wife, Melania Trump, released a statement that said, "The words my husband used are unacceptable and offensive to me." But then she added, "I hope people will accept his apology, as I have, and focus on the important issues facing our nation and the world."

When it comes to her role in her father's campaign, Ivanka has tried to help him appeal to women voters. It's likely that she may feel conflicted about the latest news. Back in April, CNN reported that at a town hall event, she said,

"I have witnessed these incredible female role models that he's employed in the highest executive positions at the Trump organization my entire life, in an industry that has been dominated by men. He believes in inspiring women, empowering women."

It's hard to stand by such a statement with recorded audio of him believing he's entitled to women's bodies. Not only that, but Ivanka appeared in a campaign video for working moms that was released at the end of September. You can see for yourself below.

Considering she's come this far in her dad's campaign, I doubt she'll back out now. But I'd definitely respect her more if she releases a statement similar to her step-mom, saying she doesn't agree with his words about women. Either way, I would've been surprised if Ivanka was a no-show at the debate.