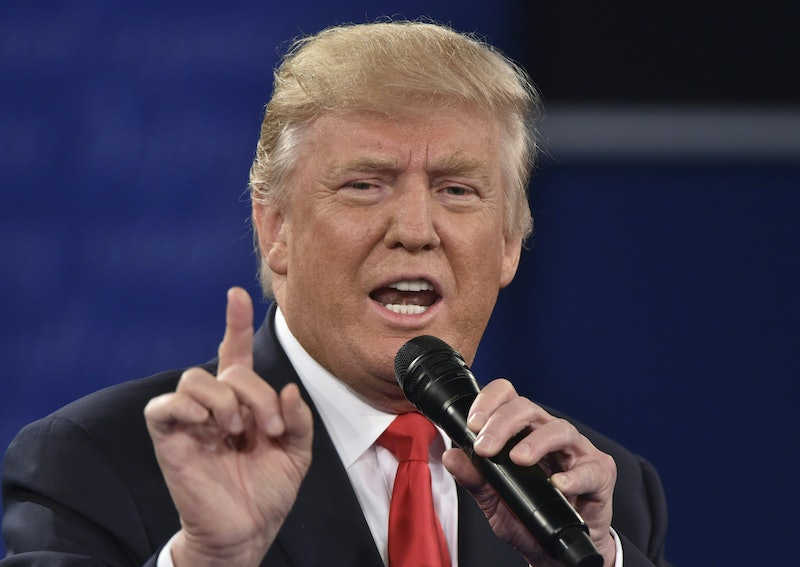 Honestly, I wasn’t totally sure what to expect from Donald Trump in the second debate on Sunday night. After the release of the “grab ‘em by the pussy” tape on Friday, this weekend was far and away the worst one for his campaign since this election cycle began. So what was he going to do on Sunday night? Was he going to deflect? Go on the attack? Actually — gasp! — own up to his own words and actions? Admittedly I knew that last one was probably a long shot — but as the debate progressed, a thought began to crystallize in my head. It was a curious thought, but one that began to make more and more sense each time Trump opened his mouth: In this debate, Donald Trump… is every Twitter troll who has ever harassed you. Except that he’s not just on Twitter; he’s on the national stage. And he’s actually running for President.

Just… think about that for a minute.

Online harassment is, in a word, rampant. In 2014, the Pew Research Center found that 40 percent of all internet users report having experienced harassment. The nature of that harassment tends to vary depending on who you’re talking to; according to the survey, men are more likely to experience “name-calling, embarrassment, and physical threats,” while women between the ages of 18 and 24 tend disproportionately to experience “certain severe types of harassment” — namely stalking and sexual harassment. (The stalking and sexual harassment is, by the way, in addition to the disproportionately high rates of physical threats that tend to affect all people in the younger age brackets.)

A lot of this harassment gets carried out on social media, which has given rise to a creature of almost mythic proportions: The Twitter Troll.

As a lady-type person who writes on the internet, I have been on the receiving end of the ire of a good deal of Twitter trolls. And over the years, I’ve noticed the emergence of a number of patterns; most Twitter trolls, it turns out, have pretty much the same basic M.O. This is perhaps unsurprising — but what is surprising is the fact that a current nominee for a major political party in the United States also has that M.O. And that he’s master of one particular technique: Derailment.

Right out of the gate, for example, moderator Anderson Cooper addressed the fact that grabbing someone by the genitals without their consent is, in fact, sexual assault, asking Trump whether he understood that. Somehow, though, Trump’s answer wound up… at ISIS. What does ISIS have to do with Trump talking about grabbing people by the genitals without their consent? I have absolutely no idea. But Trump bringing the conversation from sexual assault to ISIS is a textbook derailment — that is, as the Geek Feminism Wiki defines it, what happens when “discussion of one issue is diverted into discussion of another issue, often by the group who were being called out about their bad behavior in the first place.”

Twitter trolls love derailment. It’s one of the main tent poles of Gamergate: Guy accuses woman of cheating on him for game reviews — something which is demonstrably false — and the argument becomes, “IT’S ABOUT ETHICS IN GAMING JOURNALISM!” It’s not about ethics in gaming journalism, but by claiming that it is, the focus gets shifted from the disproven accusation as a way of brushing it under the rug. And that’s exactly what Trump did when he moved a conversation about some… dare I say… deplorable things he said and did to ISIS.

This isn’t the only Twitter troll strategy Trump employed throughout the gate; his attack on the Affordable Care Act without offering a concrete solution is one, and his avoiding the question about whether or not his stance on his proposed Muslim ban stands so much that moderator Martha Raddatz had to repeatedly tell him to answer the question already is another. I’m not exaggerating when I say that I watched the majority of the debate with my hands to my mouth in absolute astonishment.

Trump isn’t what you probably think of when you think of the phrase “Twitter troll.” But if there’s one thing I’ve learned in my years existing both on the internet and in the world, it’s that Twitter trolls often don’t match up with the image of “Twitter troll” so many of us have in our heads. And Donald Trump absolutely is a Twitter troll… in real life.

And the idea of a Twitter troll running this country is absolutely terrifying.