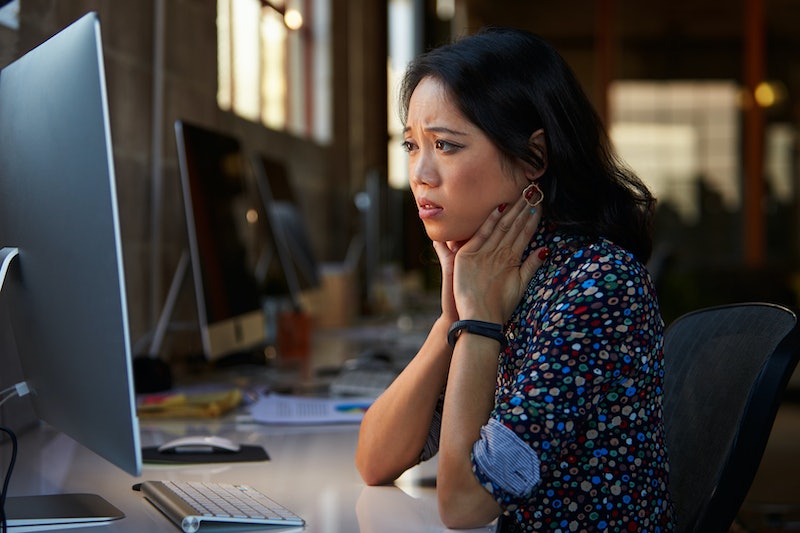 A recent BBC interview with Daily Life columnist Clementine Ford discusses the conundrum of what to do about Internet trolls, which often target feminist writers. Online harassment can feel like a no-win situation, Ford says, since even blocking people often just gets you criticism for refusing to engage in supposedly friendly debate. One solution she tried, however, did pan out: After Michael Nolan called Ford a slut, she posted screenshots of his comments on Facebook, tagged his company, and got him fired. This is one of the most productive ways to deal with trolling I've seen, as it displaces shame from the victim to the perpetrator. But sometimes, we don't have enough information, energy, or power to impose long-lasting penalties on trolls, and our priority is just to preserve our own mental health.

Like Ford, I've encountered the bulk of my Internet trolls as a feminist writer, but we're not the only people they go after. As Mia Matsumiya's Perv_Magnet Instagram points out, women get harassed on all sorts of forums, including social media and online dating sites. Anyone with an online presence is subject to trolling, but women especially receive misogynistic remarks from strangers on the Internet. After changing her Twitter profile picture to one depicting a man, Alex Blank Millard was shocked to stop seeing rape-threatening and fat-shaming tweets in her notifications. And writer James Fell notes that he rarely receives violent harassment despite being an "MRA-bashing feminist."

Over the course of my time as a feminist writer, trolls have had less of an emotional impact on me, which means I've either become disturbingly desensitized or developed some coping mechanisms (probably a combination of both). So, in the hope that they'll also save you tears over opinions that shouldn't matter, here are some things I remind myself when the trolls come out.

1. Trolls Are Not Credible Sources

A study published in Personality and Individual Differences found that trolls tend to have the personality traits of sadists, psychopaths, and Machiavellians — not exactly the people whose opinions you should trust. Trolls are people who go around looking for things to criticize because they enjoy hurting others. They are not critical thinkers intelligently responding to what you have to say, so take their opinions with a grain of salt — or, better yet, just don't take them at all.

If you're facing online harassment, you're not alone: a Pew Research survey found 65 percent of Internet users ages 18 to 29 have dealt with this problem. If you need help convincing yourself that it's not your own blog post, video, or online dating profile that spurred the trolling, look at what others receive, like the YouTube comments read by vlogger Marina Wantanabe in the video above. By noticing the commonalities, you'll realize the trolling has nothing to do with you, and you also might even find some camaraderie. Once, after receiving a death threat on Twitter, I noticed the user's feed was entirely death threats to women writers and messaged another one of them. We commiserated over our common experience and both reported the troll, getting him kicked off of Twitter.

We should be able to gain widespread acknowledgement of our ideas without the side effect of trolling. But since trolls typically go after people with a large online presence, becoming a target often means that you're someone whose opinions are gaining attention, even if that attention can be negative. For me, it meant that my writing was being read by a large audience consisting of more than just people who agreed with me, and that was a silver lining.

4. Blocking And Reporting Are Always Options

Most social media sites and online dating sites provide the option to block and/or report someone harassing you. I used to feel guilty about being the tattle-tale who got these people in trouble, but it helps me to remember that I'm saving others from harassment by removing the offenders from the site. While it's possible that they'll come back under another name and criticize you for refusing to engage with them, they usually move on to a more accessible target instead — and you can always block their alter ego, too.

One study published in the Journal of Computer Mediated Communication found that negative comments caused people to find an article less credible. In addition, writer and comment moderator Maisha Z. Johnson told me for another article that she has noticed that the first comment on an article tends to set the tone for the rest. So, if you feel like you're being attacked by a whole army of trolls all at once, it may have more to do with the influence of the first one than with your audience's unanimous agreement. Another way to remind yourself that your trolls don't necessarily represent popular opinion is to look at "likes" and "shares" on your posts, articles, or videos, which represent all the people who liked them but may not have felt the need to comment.

6. There Are Tools To Mitigate The Damage

If you have your own website, you can download Tessa Thornton's script Echochamber.js to make trolls' comments invisible (but still let them comment away so they don't take out their angst elsewhere). In addition, Firefox has a CommentBlocker extension that lets you block comments on specific sites, and Chrome's Forum Troll Stomper extension lets you block comments on specific sites by specific people. When it comes to comments, though, my best advice is just not to read them. Don't feed the trolls.

More like this
25 Inspiring Quotes From Black Women To Celebrate Black History Month
By Kyli Rodriguez-Cayro and JR Thorpe
24 History-Making Black Women You Probably Didn't Learn About In School
By Ayana Lage and JR Thorpe
Ashamed Of Your Screen Time Stats? Here's How To Change That
By Alexis Morillo
Learning To Love, Not Judge, The Lunchbox Wives Of TikTok
By Esther Zuckerman
Get Even More From Bustle — Sign Up For The Newsletter
From hair trends to relationship advice, our daily newsletter has everything you need to sound like a person who’s on TikTok, even if you aren’t.