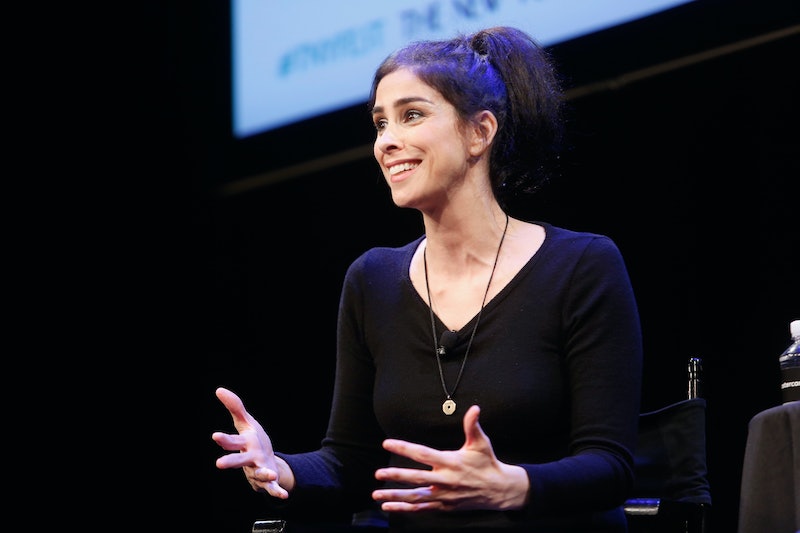 "You love him so much that you're going to tell him to go f*ck himself when he begs you to vote for Hillary?" Sarah Silverman asks of Bernie Sanders' most hardcore supporters during a conversation with Andy Borowitz at the 2016 New Yorker Festival. "What's their long game?"

It's a good question (possibly one without an answer), and it means a lot coming from Silverman, specifically. As anyone who follows the comedian on Twitter or who watched her speak at the Democratic National Convention knows, she was a big supporter of Sanders during primary season. But as she sees it, to be a Sanders supporter and not vote for Hillary Clinton in the general election is doing the senator a disservice and letting his hard work helping shape the Democratic platform and move it more to the left go to waste.

"I knew I would vote for Hillary. I mean, I wanted to vote in the primaries for Bernie, and I love Bernie," she says. "But in my opinion, people who change the world are almost never the president. They're other people. And he's one of them."

Of course, Bernie or Bust-ers are more extreme, and probably don't want to hear what a traitor like Silverman has to say anyway (more on that below), but to anyone who supported Sanders and now feels a little hopeless, her words offer some necessary positivity.

Silverman continues, "Hillary hears; she listens. She took on all of the things that were important to him. I'm sure it was a tough pill to swallow once he got so close, but I don't think he ever knew he would get that far. He wanted to start a movement and create awareness and give a voice to the people that was loud and had to be heard and that continues."

"People who change the world are almost never the president. They're other people. And he's one of them."

For Silverman, driving home the point that Sanders didn't want people to think it was all-or-nothing with him is the fact that he didn't run as an independent. "He ran as a Democrat so that he didn't split the vote. So that he wouldn't keep a Democrat from — I'm one of the assholes that voted for Ralph Nader in 2000. I was voting my conscious and I was sure [Al] Gore was going to win," she says. "You have to learn you have to change with new information and I did... I'm perfect now."

The I Smile Back star does have a theory, though, on why some people might be so unable to move past Sanders, and it's the same reason she thinks Donald Trump was able to round up supporters. "It's like how you said there's no more different people than Bernie or Trump — how could there be any crossover?" she tells Borowitz. "Because in the fringe, I would say, there are people who really just embraced it because there was a place to put their misplaced anger. And they need it. So once Bernie says, 'Please vote for Hillary. I need an ally in office,' they can't even hear it."

Lest you think that Silverman equates Sanders and Trump supporters in any other ways, she refers to Trump as both a "whitehead" and a "monster" during the night, so that clears that up. Still, it's obvious that she encourages people to vote for Clinton at this point. As she says, you have to "change with new information" and that could not be more fitting in this election.