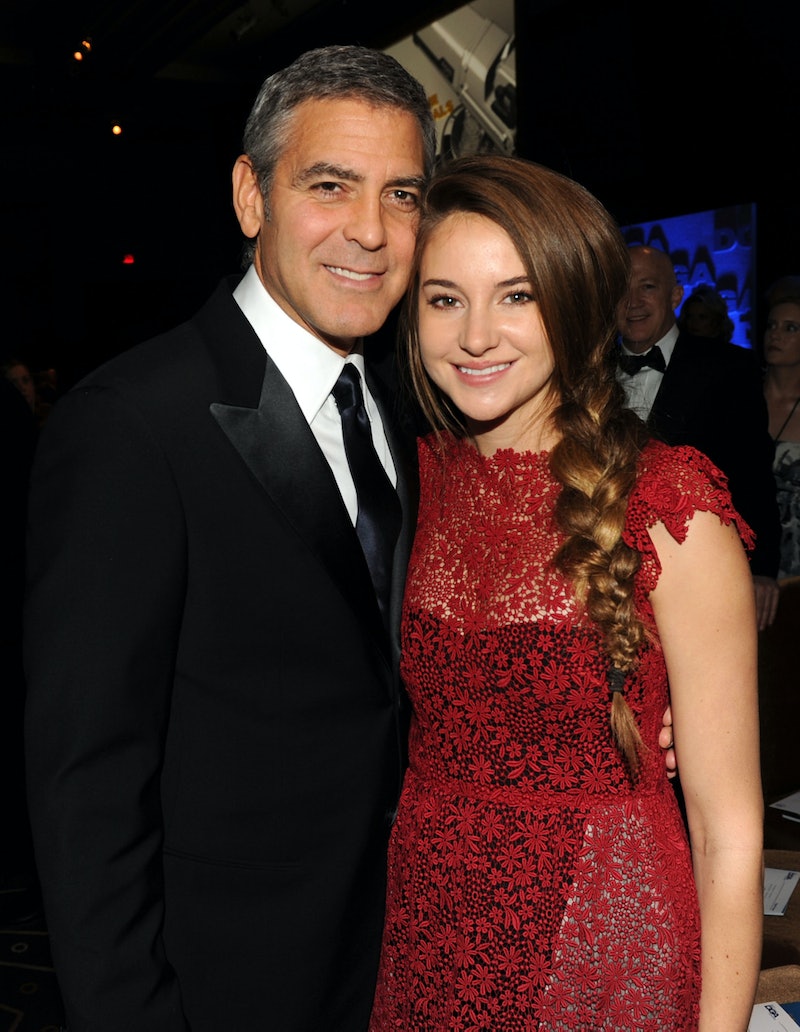 Celebrities certainly aren't strangers to getting in trouble with the law, and someone it happens when they're standing up for causes near and dear to their hearts. There have been plenty of celebrities who have been arrested while protesting. Whether it's standing up for the environment, the lives of animals, for a country's people, or any other cause that comes to mind, celebs aren't afraid to use their voices. Similar to how they spread messages through their works of art, many stars use protesting in attempt to make a right out of something that they see as wrong.

So let's take a moment to look at a handful of celebrities whose protests have led to them being arrested. Some of the following faces just may surprise you and some may not. Actually, a couple of the celebs in this list have become known for protesting and getting arrested, including Daryl Hannah and James Cromwell, who have both been arrested more than once for their multiple protests. Getting arrested definitely hasn't dissuaded them from spreading what they believe is the good word and it doesn't seem like it ever will.

With that, let's see which other famous faces have been arrested for standing up for what they believe in.

On Monday, Oct. 10, Woodley was arrested for alleged criminal trespassing after protesting the Dakota Access Pipeline on Standing Rock Sioux Tribe's reservation to help fight the controversial pipeline. After her arrest, Woodley's rep shared the following statement with Bustle: "Shailene Woodley has been released from the Morton County Jail in North Dakota. She appreciates the outpouring of support, not only for her, but more importantly, for the continued fight against the construction of the Dakota Access Pipeline." Woodley, alongside a group of other individuals, protested after the U.S. Court of Appeals for the District of Columbia Circuit rejecting the tribe's request to stop construction on the pipeline. The pipeline is considered controversial because the Sioux Tribe believes it will destroy some of its sacred sites if constructed. The Morton County Sheriff's Department has not yet responded to Bustle's request for comment.

In March 2012, George Clooney was arrested while protesting at the Sudanese Embassy in Washington D.C. Before his arrest, the actor said (via CNN), "We are here really to ask two very simple questions. The first question is something immediate — and immediately, we need humanitarian aid to be allowed into the Sudan before it becomes the worst humanitarian crisis in the world." He added that the second thing "is for the government in Khartoum to stop randomly killing its own innocent men, women and children. Stop raping them and stop starving them. That's all we ask."

According to CNN, a police officer gave the group of protesters a third warning and then started making arrests. Per Secret Service spokesman Max Millien (via CNN), Clooney was charged with disorderly crossing of a police line, a misdemeanor. He ended up paying a $100 fine rather than appearing in court, Metropolitan Police Department spokeswoman Gwendolyn Crump told CNN.

James Cromwell was arrested in December 2015 during a protest against a power plant in New York. Per The Guardian, the Babe actor locked himself to two other individuals in protest of the Competitive Power Ventures facility. After being arrested, he was charged with alleged disorderly conduct and was set to appear in court in January. It's unclear if the court appearance has happened or what came of Cromwell's charges. Before that, in 2013, Cromwell was arrested while protesting against experiments on cats at the University of Wisconsin. After his arrest, his rep confirmed to The Hollywood Reporter that he was soon released. Bustle has reached out to a rep for Cromwell regarding the outcome of two arrests, but has not yet received a response.

She's no stranger to protesting or getting arrested. For example, in February 2013, Hannah was arrested while protesting the Keystone XL pipeline in front of the White House and was released after bail was set at $100, per Hannah who spoke with Sean Hannity after the incident. In October 2012, the Splash actor was arrested again for protesting the Keystone XL pipeline in Texas and this time was held on charges of alleged trespassing and allegedly resisting arrest, per the Wood County Sheriff's Office (via THR). Us Weekly reported at the time, Hannah paid a $1,000 bond and a $3,000 bond for the separate charges. Those are only a couple of the times Hannah's been arrested for protesting.

In 1999, Susan Sarandon was arrested alongside 219 people while protesting at the New York police headquarters over the police shooting of unarmed West African immigrant Amadou Diallo. "If we’re not here today, then we’re saying that what happened is acceptable and normal, and I think that does a disservice to the other police," Sarandon said (via People) at the time. "I think it’s time we focus on this issue, and racial profiling is not acceptable. I don’t think we want to be made safe at the expense of our civil liberties." Bustle has reached out to a rep for Sarandon regarding the outcome of this arrest, but has not yet received a response.

The former Sex and the City star was arrested in May 2002 during a protest in New York City demanding better funding for public schools. She was arrested alongside 11 other people, and as Nixon told E! Online at the time, "[The arrests] were pre-arranged. The police were very respectful. We were handcuffed, put in a paddy wagon and were taken down to a station." She was released and due in court that June, though it's unclear if the court date ever occurred. Bustle has reached out to a rep for Nixon regarding the outcome of this arrest, but has not yet received a response.

In 1996, Woody Harrelson was arrested after he and a few other environmentalists scaled the Golden Gate Bridge. Yes, you read that correctly. This was their way of protesting to save a 60,000-acre ancient redwood in Northern California. "I shamelessly and proudly call myself a tree hugger," Harrelson said to the Los Angeles Times before coming down off the bridge. Bustle has reached out to a rep for Harrelson regarding the outcome of this arrest, but has not yet received a response.

Like many others, Steve-O is not a fan of SeaWorld. In August 2015, the Jackass star was arrested in Los Angeles after climbing a crane in protest of SeaWorld. Atop the 100-foot crane over Sunset Boulevard, he held an inflatable Shamu balloon with the words "SeaWorld Sucks." He even shot off fireworks from the crane.

According to Rolling Stone, Steve-O spent less than eight hours in jail, despite being sentenced to jail for 30 days after pleading no contest to trespassing and illegal use of fireworks. He also was sentenced to three years probation and charged with paying back the city of Los Angeles $14,000. Apparently, he could've faced up to four and a half years in jail, but per the Los Angeles Times, "The Los Angeles County Sheriff's Department says anyone sentenced to less than 120 days is immediately released from custody because of the facility’s current release criteria and overcrowding."

In February 2012, Lucy Lawless was arrested in New Zealand after protesting oil drilling on an Arctic ship. She and five other Greenpeace activists were arrested on the ship. They were all charged with alleged burglary and Lawless pled guilty. In February 2013, the Los Angeles Times reported that she and the other protesters were ordered to pay $547 each and complete 120 hours of community service.

Martin Sheen is no stranger to getting arrested for protesting. For example, in November 1986, he was arrested during an anti-nuclear protest at the Nevada Test Site entrance. He was taken into custody on misdemeanor alleged public nuisance charges and pled innocent. "I love my country enough to risk its wrath to tell the truth," he said at the time of his arrest. "The only thing I'm guilty of is 46 years of silence, contributing to a national religion: nuclearism." In May 1990, Sheen was arrested again after splashing what looked like blood on the front of the downtown Federal Building in Los Angeles. It was part of a demonstration to protest U.S. policies and those killed in El Salvador. Bustle has reached out to a rep for Sheen regarding the outcome of these two arrests, who told us, "By my last count, Martin has been arrested 68 times, ALL for peace protest. Unfortunately, I can't speak to the particular circumstances around the arrests to which you are referring."

One month after his former ER co-star Clooney was arrested, Noah Wyle was arrested in 2012 for protesting in Washington D.C. at Capitol Hill. He and members of ADAPT were protesting Congress to not cut Medicaid. "As soon as everybody saw me being led away, they let up a big whooping cheer, which made me feel really good," Wyle said after getting arrested (via The Hollywood Reporter). Bustle has reached out to a rep for Wyle regarding the outcome of this arrest, but has not yet received a response.

First up, in April 2010 (above), Danny Glover was arrested in Maryland alongside 11 other people during a labor union protest at the headquarters of Sodexo, a food service company, for what they claimed was unfair and illegal treatment of workers. Per The New York Daily News, they were given citations for alleged trespassing and could've faced 90 days in jail or pay a $1,000 fine. After the arrest, Glover tweeted (via E! News), "I'm fine. Andy stern, myself and the org want to thank you all for your support. To get involved or informed go to www.seiu.org." Sodexo's vice president for employee and corporate relations released a statement at the time that read, "We can tell you categorically that Sodexo recognizes and respects our workers' rights to join or not join a union as they choose." Bustle has reached out to a rep for Glover regarding the outcome of this arrest, but has not yet received a response.

There certainly are a lot of celebrities who've gotten arrested for protesting. I'm sure those above won't be the last, either.