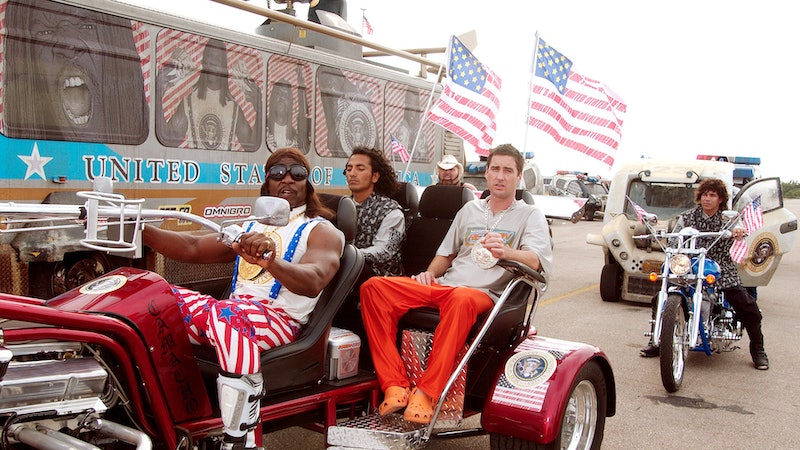 I know time is a construct, because this election year has gone on for just as many months as previous election years, but still feels like the longest one yet. By a lot. Fortunately, America is in the home stretch and will soon be able to devote more of its news, Twitter sprees, and Facebook comment fights to matters other than "Who should be leading the Free World?" Election Day is coming up on Nov. 8, and you still have to entertain yourself until then. Instead of getting into yet another argument you can't win with yet another distant relative you only see at Thanksgiving, why not turn to some thematic fiction? Watch any or all of these 16 movies before Election Day, and I promise they'll help you get through this.

Chances are good that you've already made your decision about who gets your vote. It's not likely that these movies will sway you in any particular direction, but they may get you thinking about the role that politics plays in your life, the flaws in the system, and the people behind the offices. From DC dramas to political allegories, these films may help you process the sheer craziness of Decision 2016.

1. All The President's Men

This Oscar-winning biopic stars Robert Redford and Dustin Hoffman as Woodward and Bernstein, the Washington Post reporters who blew up the Watergate scandal and ultimately sent corrupt President Nixon packing.

From the guy who brought you Office Space, Mike Judge's satire Idiocracy is the story of a regular guy who wakes up to a future where he's far-and-away the smartest man alive. The familiarity of a society designed to cater to the lowest common denominator might be a tad depressing, but it's important to keep the worst possible outcome in mind.

Disgraced Nixon squares off with David Frost, a popular British TV presenter, in an unprecedented and candid interview.

An overachieving young woman makes a grown man furious by going after what she wants. Do I have to spell out the significance?

This comedy is an absolute necessity for fans of Veep. The show's creator Armando Iannucci also directed this foul-mouthed script, an adaptation of his British series The Thick Of It.

Daniel Day-Lewis unleashed his Method acting on the 16th President of the United States and you know Secretary Clinton is a fan.

Tim Robbins plays a millionaire conservative candidate with no political experience but a significant pop culture presence. (He even sings at a beauty pageant.) Did a psychic write this, or what?

Kick back and indulge in a little classic comedy. The Marx Brothers mug their way through a movie about a rich man who takes over the state of Freedonia and turns it into a dictatorship.

When his Vice President dies, President Jackson Evans (Jeff Bridges) nominates a woman for the position. The confirmation process puts Laine Hanson (Joan Allen) through the wringer, with rumors and invasive questions about her sexual history pulling focus.

Bill McKay (Redford, again) is a good, honest man who has his ideals and morals challenged when he enters the political arena. Can he hold onto his principles or will he be swayed by power?

Switching tracks from political movies for a moment, let's talk about sisters who are really doing it for themselves. Jane Fonda, Lily Tomlin, and Dolly Parton star as a fed-up office staff who kidnap their sexist pig of a boss.

Pan's Labyrinth is a Spanish story, not an American one. But the backdrop of fascism on which Ofelia builds her fairy tale world is a reminder of how bias and xenophobia can take hole.

Michael B. Jordan gives a heartbreaking performance as Oscar Grant III, a real victim of police violence. Of course, police brutality and institutionalized racism are of great concern to many Americans right now. This movie tells one specific story with the care it deserves.

Do not even think about sitting at home on Nov. 8, no matter how jaded you may feel. For some, it was totally reasonable to die for this very right.

When a woman wants to get ahead, the rules are different and "likability" becomes an annoyingly valid factor. Miranda Priestley is the best of the best, whether you want to be friends with her or not.

I hope these 16 movies give you some respite from the exhausting 24/7 news cycle. And don't forget to exercise your right to vote on Nov. 8!