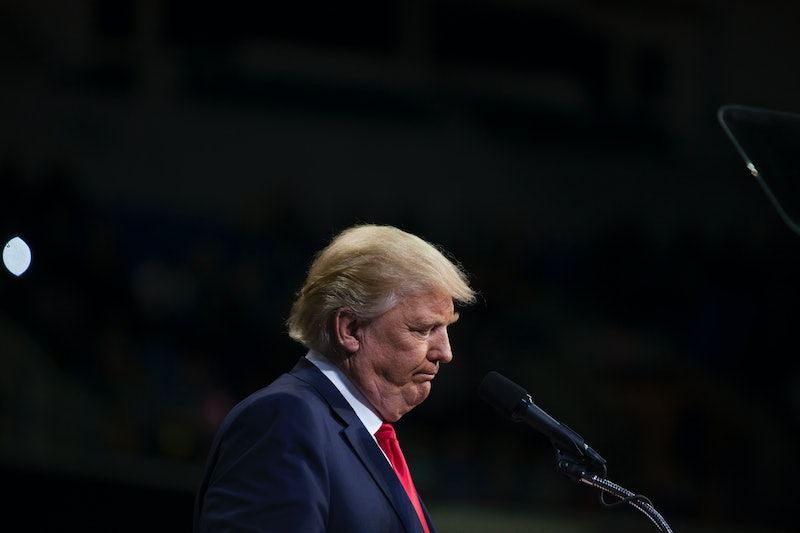 After my first sexual assault in college, I used to have this reoccurring nightmare wherein my attacker had me pinned down in the middle of campus, and no matter how hard I yelled, no matter how hard I fought, I couldn't get up, and no one walking by bothered to stop and help. For years, nothing ever scared me as much as that dream. But when I heard the recently released audio of Republican presidential nominee Donald Trump making lewd comments about women, and even going so far as to brag about his ability to sexually assault them and get away with it due to his fame, I got that same sick feeling in my stomach that I get whenever I wake up from that nightmare.

When The Washington Post released audio from 2005 of the presidential hopeful talking about kissing women and grabbing them by their genitals without their consent, people everywhere — men, women, Democrats, Republicans — erupted with anger, quick to call out the nominee's behavior for what it was: deplorable. Though he did technically apologize ahead of the second presidential debate on Facebook, given the opportunity to acknowledge his wrongdoings and apologize to a wider audience Sunday night, Trump himself instead decided to make excuses for his behavior, saying:

It's this reaction, this non-acknowledgement, this nonchalant attitude toward rape culture and the refusal to call grabbing women by their pussies without consent what it is — sexual assault — that is perhaps even more terrifying than the original leaked tapes themselves.

After my own assault, which was committed by someone I had been intimate with on a previous occasion, I heard the same kind of excuses coming from him that I hear echoed in Trump's apology (if you can call it that). My attacker said he was sorry, but — and no one can ever really be sorry when they follow that apology up with a "but" — he was just "messing around." He told me it was just a "dumb guy thing," and that he didn't mean to do anything to hurt me. But he did hurt me.

If the president thinks that touching women without their consent is just "locker room talk," what will stop a college student from using the same excuse?

While it appears that Trump isn't afraid to hypothetically touch another person without their consent or use vulgar and violent language, he is afraid to identify his comments for what they are, excusing them with a "boys will be boys" mentality that reinforces the idea that women's bodies are up for public consumption. And that's the real issue here.

If the president thinks that touching women without their consent is just "locker room talk," what will stop a college student from using the same excuse? We already see celebrities, sport stars, and other public figures explaining away and defending their own sexual misconduct, but to have the potential president doing it shows just how pervasive our current rape culture truly is.

It's behavior like Trump's ― both his original comments and his reaction in the aftermath of them being made public ― which perpetuates a culture in which rapists get a slap on the wrist for "20 minutes of action" instead of the justice their victims deserve. It's words and actions like Trump's which permit men to claim women's bodies for their own use, to practice catcalling and slut-shaming on public streets, to excuse sexual assault behind closed doors. Trump is not merely the product of rape culture — he is actually publicizing it, championing it with his comments on the tape and his sorry excuse for an apology Sunday night at the debate.

The bottom line is this: What Trump described is sexual assault. It was a man talking about forcing his body and his power onto a woman. A terrifying situation under normal circumstances, but the fact that this kind of disgusting, sexist, predatory talk came from a presidential nominee brings every woman's darkest nightmare to life.

Every now and then, I still have that nightmare about my sexual assault. But when I wake up, cold and shaking and even sometimes crying, I look around at the safety of my room. I used to breathe easy, knowing it was all just a bad dream. That strategy isn't working so well anymore.