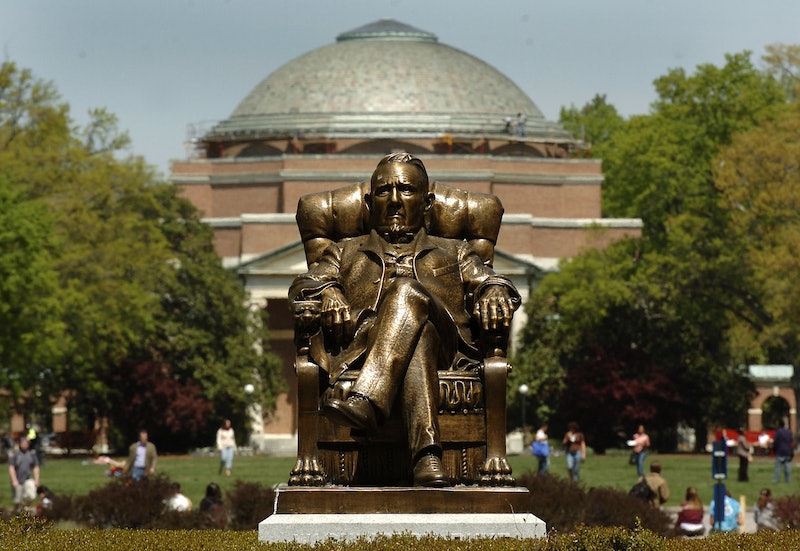 Many colleges have added women's studies programs throughout the years, but fewer attention has been paid to issues faced by men. The Duke University Men's Project, however, is looking to change that. The Duke Women's Center created the optional, weekly, nine-week-long, student-led program for men to examine rape culture, male privilege, toxic masculinity, and other issues that affect people of all genders but are not always discussed among men. It's not the first school to adopt such a program, but the fact that it's one of a growing number to do so is noteworthy; the trend is an important one, making the point that feminism is for everyone. (Bustle has reached out to Duke for comment and will update this post if/when we hear back.)

The Duke Men's Program joins a number of other programs at colleges and universities across the country with similar goals. The University of Massachusetts Amherst's Men and Masculinities Center, for example, holds events that expose men to feminist perspectives. Trinity College's Masculinity Group hosts weekly discussions about gender and participates in nation-wide movements like "Walk a Mile in Her Shoes," during which men walk in high heels. Stony Brook's academic Center for the Study of Men and Masculinities sponsors seminars like "Aging Masculinities in U.S. Culture and Literature" and "Competing Masculinities: Playing through Race, Class, and Sexuality." Brown University offers the Gender, Power, and Sexuality Workshop, which used to be split into female and male sexuality workshops, but later became non-gender-specific in order to be more inclusive.

Conor Smith, a student behind Duke's project, told the Duke Chronicle the program hasn't been without its critics. "The work of trying to dismantle an inherently oppressive system will always encounter resistance, and what we saw in the last three days was perhaps much more accelerated and broad than we thought it was going to be, but you expect to encounter that on this campus and everywhere else," he said.

Such backlash is already familiar to a lot of women and gender-nonconforming people who have tried to fight sexism, so men should understand it, too. It's not fair, after all, for all the work of fighting oppression to fall on the shoulders of people who are already busy dealing with that very oppression.

Oppressed groups are often disproportionately involved in fighting injustice, since it affects them personally. But oppression affects privileged people too, even if it's less obvious. Men, for example, experience pressure to hide their emotions and behave dominantly toward women, which can hurt their mental health, due to gender norms.

Even more importantly, though, men's help is desperately needed. Fighting rape culture, for example, won't be very effective when the population committing the majority (though not all) of the rapes isn't part of the discussion. Until there are as many men's groups as women's groups on campuses — and as many men as women in women's groups and mixed-gender feminist groups, which are already discussing masculinity — the feminist movement won't accomplish everything it needs to. The creation of programs like Duke's is an encouraging step — and hopefully just one of many more to come.

More like this
25 Quotes About Love To Share During Pride Month 2022
By Madeleine Aggeler and Emma Garza
What The History Of Pride Month Means For Celebrations Today
By Jay Polish
Sandra Bullock, Girlboss Extraordinaire
By Matt Harkins & Viviana Olen
Meet The Spice Company Founder Who Sees Chai As A Metaphor
By Madhuri Sathish-Van Atta
Get Even More From Bustle — Sign Up For The Newsletter