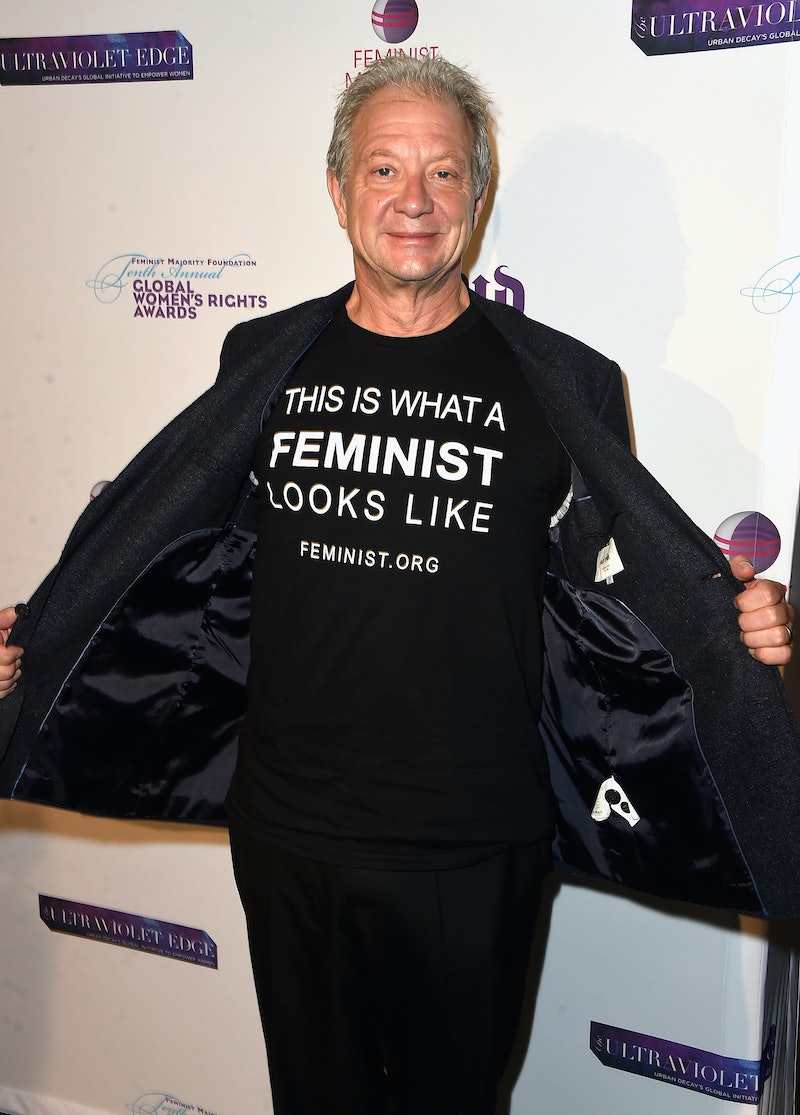 People have all manner of different opinions about whether men can be feminists, but personally, I am of the strong opinion that they absolutely can. The question, though, then becomes what the best ways for men to be feminist allies actually are. Because while I absolutely think there is and ought to be room at the feminism table for men — feminism is good for everyone, after all — I've also seen a lot of men try to be feminists in ways that aren't exactly the most helpful — and which sometimes can be downright counterproductive.

Again, I'm not saying men can't be "good feminists," whatever that means. It's great when men want to be part of the movement for gender equality, but believing in gender equality is not the same thing as knowing how best to fight for it.

The truth is that all people, men and women, have spent a lot of time living in a patriarchal society, and whether you find feminism at 15, at 50, or even at 99, that means that a lot of those values have already made their way into your brain, whether you want them to or not. Feminism, on the other hand, is about dismantling patriarchy, and that includes not reproducing its twisted social power dynamics within the movement. And that means that a lot of men's unconscious assumptions about how to behave just don't work in a feminist context anymore. It's no one's fault; it's just something that we have to identify, then work to change.

So how does one go about being a good male feminist/feminist ally? Well, here are 10 tips to keep in mind. And don't worry — once you get the hang of it, it's not actually as daunting as it might seem.

This is step one. Be a feminist and be proud — not just of the identity, but of the term itself. Too many people try to make feminism a bad word in our society. The more people who reject that and proudly adopt the label, the better things are for the movement as a whole.

2. Recognize That Feminism Is Complicated

If you're going to be part of the movement, you should also take a little time to understand it. Feminism is huge and complicated, and there are just as many different opinions and schools of thought as you would expect of a movement dedicated to the interests of pretty much the entire world. So understand that feminists don't speak with one voice. Go look up what, say, intersectional feminism is, or what sex-positive means, or what people are talking about when they say White Feminism or womanism or TERF, or how different schools of feminist thought view sex work or porn or any number of other complex issues.

You don't have to be an expert by any means, but if you want to be an ally, you should at least have some sense of the complicated picture that is feminism.

Like I said earlier, we live in a patriarchal society, and among many other things, that society raises men to be confident and to believe that their opinions are always valuable. So it can be hard to realize that when it comes to feminism, you need to stop talking, especially at first. Feminism is a movement founded by women and its primary goal is to end oppression of women. Women are the ones who have had to deal with most of the negative effects of patriarchy all our lives, and this gives us a more informed and useful perspective on patriarchy than men have. So as a male feminist, it's your job first and foremost to listen to what women have to say, and to respect our point of view even when you don't understand it or disagree.

Plus, again, if we're dismantling patriarchy, breaking down the idea that men's voices are more important is pretty big all on its own.

4. Be Aware Of The Intersections

No, not that kind.

And because feminism is meant to support all women, that means supporting all women as they deal with all those other forms of oppression, too — some of which, you may share, some of which you may not. Either way, it's always worthwhile to keep this stuff in mind.

There are a lot of important things that feminism can do for men. Toxic masculinity, which goes hand in hand with patriarchy, is not fun for anyone and often limits men's choices in terms of interests or self-expression, and it means that many men are never really given the tools to properly deal with their own emotions. All of which sucks, no question.

Basically, dismantling patriarchy has benefits for both men and women, but the issues women face are so numerous and so severe that they have to be priority.

One of the struggles as a feminist is in getting people to listen to you — and then not to write you off by using the stereotype of the crazy, emotional woman. Women also often don't feel safe or comfortable speaking up when they see something sexist. But men don't have that problem. Men can challenge fellow men in a way that women can't, and if you use that opportunity to try to educate other guys, or just send the message that sexist attitudes are not OK, that can go a long way. It can feel awkward, but it's worth it.

7. Be There For Your Female Friends, Partner, Coworkers, Etc.

Women deal with a lot of crap in this world, and it helps to know someone has your back. Feminism is about supporting women as we deal with a sexist system, and there's no reason men can't be supportive, too. So pay attention to the women in your life. If they come to you with a problem, take them seriously. If they want to complain about something, listen. If they ask you to help them or to speak up, do it. If they want to handle it themselves, respect that, too. Support the women in your life.

The War on Women isn't over. Politicians are still demonizing women's reproductive health care and making sexist comments. Don't vote for those people. In fact, actively vote for other people. Vote against "Personhood Amendments" and other attempts to take away women's right to choose or to have health care access. Support Planned Parenthood. Support ending violence against women. Send the message that women's issues aren't "just" something women care about — in fact, they aren't "just" anything. They matter to everyone.

One of the most apt descriptions of being an ally — to any social justice movement, not just feminism — that I've ever heard comes from a Lady Power Hour episode on Citizen Radio: "Just pretend you’re an intern. Like what would you do if you were an intern? You would hang out, take notes, listen, speak up when somebody asks you to, and get coffee." You would not, on the other hand, try to hold your own meetings or write evaluations for the staff or try to dictate strategy or expect to be put front and center. Again, it's really easy for people who have some form of social privilege to instinctively feel they can lead the charge. Fight that urge.

10. Accept That These Problems Are Bigger Than You

When you first get interested in any kind of social justice movement, it can be exciting and it can inspire you to want to take on everything all at once. It's so clear to you now, and we just need to go fix it guys. It's all right there, we just need to fix it.

It's an understandable and admirable impulse, but if things were that easy, they would have gotten solved long ago. If you really want to be a feminist for the long haul, sooner or later you have to let go of your dreams that your commitment and drive will be the final nail in the coffin of patriarchy, and instead channel that passion into stuff that other people are doing. Signal boost feminist writers. Donate or volunteer with women's advocacy groups or domestic violence shelters or other organizations. Support existing campaigns. Challenge the status quo in your own life. But try to fix it all yourself, especially before you have a strong grasp of things, and you'll probably either mess up or burn out or both. I've seen it happen — to both men and women.

I don't mean to be a downer, though — the thing is that you don't have to be the one organizing some brand new cure for these age-old problems. These issues are bigger than you are, yes, but that's why we have a movement. Feminism is also bigger than any of us. So be a feminist, join the movement, and be part of the solution with us.

More like this
Beyoncé & Madonna’s “Break My Soul” Remix Honors A Group Of Black Icons
By Stephanie Topacio Long
22 Movies On Netflix That Are Perfect For The Whole Family
By Bustle Editors
Here’s Your Daily Horoscope For August 8, 2022
By Mecca Woods
The Best Time To Date After A Breakup, According To Experts
By Bustle Editors
Get Even More From Bustle — Sign Up For The Newsletter