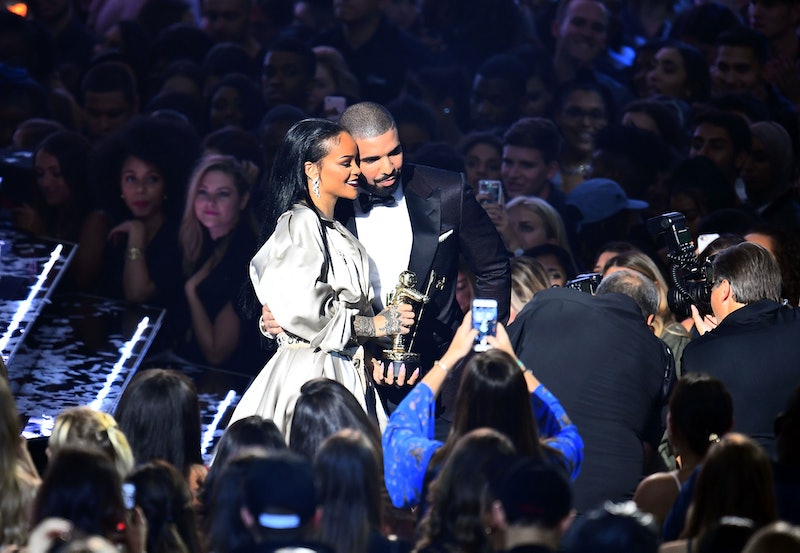 Let's be honest. Drake and Rihanna are, and will always be, one of the great love stories of our time. Which is why it's so shocking to hear that Drake and Rihanna might have broken up — if they were ever actually together to begin with. It's all very confusing. After months of speculation throughout 2016, the rumored couple appeared on stage together at the MTV Music Video Awards, and Drake said the legit sweetest things he could say about Rihanna. He basically declared his love for the artist when he announced, "She's someone I've been in love with since I was 22 years old. She's one of my best friends in the world." So why did Drake and Rihanna break up now?

According to E! News, an anonymous source said, "Rihanna and Drake are seeing other people at the moment. They are not exclusive anymore. They still love each other, but their schedules have gotten in the way." While this statement doesn't sound totally final, it's not good news for fans of the couple who have grown to adore their public displays of affection, and their awesome musical stylings.

Perhaps what's most interesting about their alleged break up is that different outlets are reporting very different reasons for the split. E! News claimed that it wasn't Rihanna who made the move to break up. An alleged source told the publication that "Drake and India Love have been hooking up for at least a few weeks," leading fans to believe it was the "Hotline Bling" singer who moved on first. However, US Weekly tells a totally different story, reporting that the break was Rihanna's choice, with a source telling the magazine, "She doesn't want to be held down. They will always be close. If they end up together, it could happen, but not now."

While we're unlikely to find out who made the ultimate decision to take a break, it sounds as if both singers have already started to move on from the relationship. Despite getting matching shark tattoos, it sounds as though Rihanna and Drake are done for now. Hopefully the pair will remain friends and musical collaborators, because I don't think I can cope with living in a world in which those two never work together again.