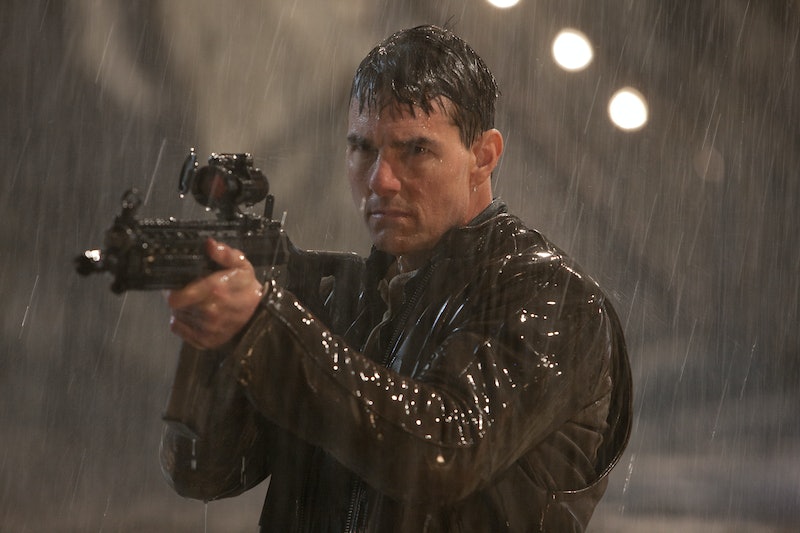 Perhaps the most surprising sequel coming out this year is the new film Jack Reacher: Never Go Back . The first film in the series, Jack Reacher, was released in 2012 to little fanfare. The film made just $80 million during its domestic run — not terrible by any means, but hardly the type of sum associated with an action franchise starter. But thanks to the international popularity of star Tom Cruise, the film brought in another $138 million overseas. And due to the movie's low budget of $60 million, Jack Reacher became a big enough hit to spawn a sequel. But what happened in the first Jack Reacher movie?

The movie, while it didn't get much attention in the U.S., was actually a terrifically fun action film, one of the best to come out in the past several years. Cruise plays the titular character, a mysterious former military cop who is now essentially a drifter. Reacher is extraordinarily gifted in practically every way — genius intellect, expert investigator, superb fighter — and he uses his gifts to help others. The story's plot begins when several people are randomly murdered in Pittsburgh by a sniper, and evidence at the scene points to James Barr, a former U.S. Army sniper. When questioned by authorities, Barr remains silent, but writes a note telling them to "Get Jack Reacher."

Reacher then shows up in Pittsburgh on his own, without being contacted by police. He saw a news report on Barr and decided to investigate, believing him to be innocent. Before Reacher gets a chance to speak with Barr, the suspect is beaten while in custody and falls into a coma. Reacher then meets with the lawyer assigned the task of defending Barr, Helen Rodin, and tells her he thinks Barr was framed. Rodin takes on Reacher as her lead investigator, with Reacher revealing his history with Barr: While they were in the service, Barr went on a killing spree and ended up getting away with it. Reacher swore he would kill Barr if he ever did it again. Reacher and Rodin begin investigating the crime, with Reacher finding problems with the evidence that the cops missed and Rodin interviewing the victim's families. Reacher deduces that the target of the killing was the owner of a local construction company and the other victims were included to make the killing look random.

The real killers are a gang of criminals led by Zec, a man who spent much of his life in a Soviet Gulag. He was owed money by the murdered construction company owner, and knew enough about Barr's history to set up the murder. As Reacher gets closer to the truth, he ends up being framed for murder by Zec and Helen is kidnapped. Reacher eventually tracks down Helen and Zec and engages in a fight with Zec's gang, killing all of them. He then frees Helen, extracts a confession from Zec, and kills him. Reacher, still wanted for murder, disappears again... as he does. The film ends with Barr waking up from his coma, telling Helen that he is terrified that Reacher will track him down and kill him, thinking that he actually is guilty of the shooting.

With Reacher disappearing at the end of Jack Reacher and showing up in a new city for Never Go Back, fans can assume the enigmatic military investigator will go through a similar cycle in the new film of uncovering a mystery, coming under suspicion himself, and ultimately kicking butt before disappearing once more. Should be a good time.

More like this
Anne Hathaway’s ‘The Devil Wears Prada’ Anniversary Post Turned Political
By Brad Witter
All The Sneaky Lindsay Lohan Movie Easter Eggs In Her New Ad, Explained
By Stephanie Topacio Long
Sadly, You Can’t Stream 'Minions: The Rise Of Gru'... Yet
By Morgan Leigh Davies
You Might Want To Rewatch 'Elvis' For This Britney Spears Easter Egg
By Grace Wehniainen
Get Even More From Bustle — Sign Up For The Newsletter