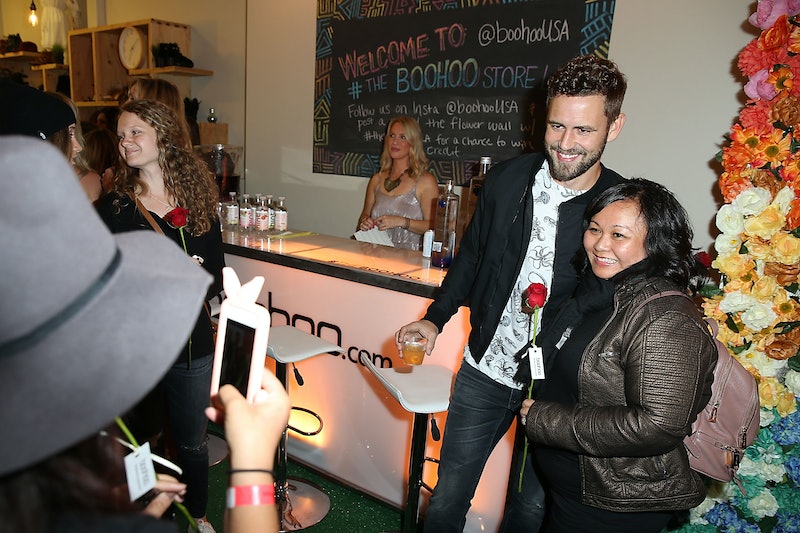 As Nick Viall and his slew of female contestants continue to shoot Season 21, show creator, Mike Fleiss, is dropping some major hints about The Bachelor that are going to have fans all kinds of excited to watch this new round of romance. In addition to a picture of a not-so-tropical location where he claimed the crew was filming, Fleiss posted another very telling picture to Twitter. This time, though, the location seems a little bit more obvious, especially since Chris Harrison and Viall are pictured in the shot. So what exactly does this recent picture reveal about the new season of The Bachelor? Well, combined with the previous shots from various filming locations, it could tell us a lot.

For instance, the picture seems to give away the location of where they are filming these days. In Fleiss' tweet, the two “most eligible men,” as he dubbed Harrison and Viall in the caption, are seen from a distance, sitting under a deck in a relatively warm location. And I say relatively warm because the plants hanging from the deck are green enough and lush enough to suggest a warm location.

As soon as the picture was posted, fans on Twitter started guessing where the two could be. The majority of responses were guessing that the two were shooting in New Orleans, and they could be right. The architecture looks like something that would definitely be found in that Louisiana city.

But whether or not they’re shooting in NOLA, what’s clear from this picture is that this season of The Bachelor seems to be taking a whirlwind tour of the United States. (Sorry to those contestants who showed up at the mansion packing a passport.) After a stop in Milwaukee last week, Viall and the women vying for his heart have seemed to move on to New Orleans or someplace like it.

These two stops have me wondering about a lot more than just where The Bachelor is filming this season. They have me wondering why they’re filming in these locations, especially since Nick Viall is a Wisconsin native. It seems a bit too early in the season for hometown dates, especially Viall’s hometown, since meeting The Bachelor’s family is usually the last stop before the final rose. So does this mean that fans can expect to see more hometown dates than ever before on this season of The Bachelor? Is the whole season one big road trip to the various contestants’ hometowns?

The jury is still out on why exactly this season of The Bachelor is being shot the way it is, but, whatever the reason, it seems like fans can expect one big blowout of an American road trip. And that in itself seems like reason enough to watch to me.