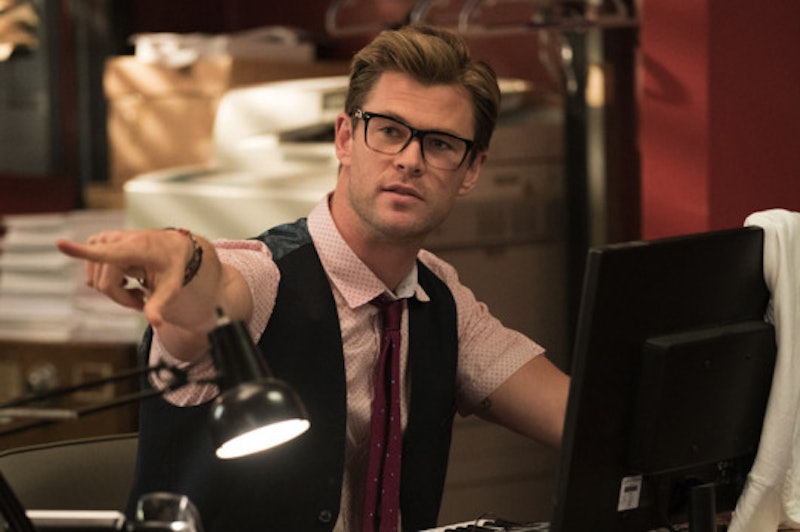 One of the best surprises from 2016's Ghostbusters reboot (other than Kate McKinnon's scene-stealing Holtzmann, of course) was the realization of just how funny Chris Hemsworth could be. While the actor has been a major movie star for years thanks to his role as Thor in the Marvel universe, his turn as the attractive but dim-witted Kevin in Ghostbusters was the first time he truly got to show off his funny side. His inability to correctly answer phones and his hilarious dancing in the movie's end credits are highlights from the film, but his truly shining moments come during his interactions with Kristen Wiig's Erin, a ghostbuster so infatuated with Kevin's looks that she completely ignores his incompetence as a receptionist. The scenes Wiig and Hemsworth share are some of the movie's best, yet according to director Paul Feig, they almost didn't happen at all.

"The whole thing about [Wiig's Erin] having this crush on Chris Hemsworth’s character, that wasn’t even in the script," Feig reveals to Bustle while promoting Ghostbusters' Blu-Ray/DVD release on Oct. 11. "That just started coming, because she had this funny rapport with him and obviously he’s such a handsome guy that she was naturally gonna bring this sort of energy that she had around him into it. It just got funnier for us. She just kept doing it,and we just kept encouraging it."

A smart choice, considering how hilarious the Erin-Kevin scenes turned out to be. While everyone's aware of how talented Wiig is at making people laugh, few expected Hemsworth to be the comedic pro he showed himself to be in Ghostbusters — including Feig. When the director first met with Hemsworth to discuss the role, he says he was struck by the actor's "naturally funny" demeanor; later, when filming began, Hemsworth's improv skills blew the cast away. "It was really funny to watch the ladies look at me with this look of, 'did you write this joke?'" the director recalls of watching Hemsworth come up with lines on the spot. "And I’m like, 'he just came up with that.' Then they started riffing off it, and it was pretty joyful."

Of course, Hemsworth was just one player in a cast full of impressive comedians. The Ghostbusters ensemble was "an embarrassment of riches across the board," Feig says, with each actor giving the movie his or her all. "Melissa [McCarthy]’s great at finding these tirades or tangents that she can hit... just these runs that she does that are so funny and so out of the blue," the director describes. "And then Kristen [Wiig]’s great at just being so in the moment of vulnerability and awkwardness, and she can just riff on that... Then you got Kate McKinnon, whose improv sensibilities are just completely out of left field, where she just loves the weirder the better, and so she’ll come out with these things and you’re just like, what wait, where did that come from?... And then Leslie Jones, who was this absolute force of nature, who is so in the moment and so honest in her comedy and so about observing what’s going on and commenting on it and having a take on it, that it’s really exciting. It keeps you on your toes all day."

If it sounds like Feig is kinda obsessed with his Ghostbusters cast and their work on the film, well, that's the truth. He describes how painful it was for him to have to cut any of the actor's scenes from the movie, even though he knew that anything deleted would likely end up in the film's DVD extras (which it did). A "good 50 percent" of the stuff filmed for Ghostbusters didn't even make it into the final cut, Feig says — but while it hurt him to cut those moments, especially those filled with improv from the cast, it's the price he knew he had to pay for getting the talent on-board the film that he did. Says the director, "That’s why I hired these amazingly funny people. They’re the ones who are gonna bring that inventiveness."

As anyone who saw Ghostbusters can attest, the stars brought much more than just imagination — the chemistry the women (and Hemsworth) share on-screen made the film one of the summer's most touching. It may have been difficult for Feig to cut out some of his cast's best moments together, but he can take comfort in knowing that the DVD extras are filled with hilarious, sweet scenes and behind-the-scenes banter that fans can enjoy months after the movie left theaters.