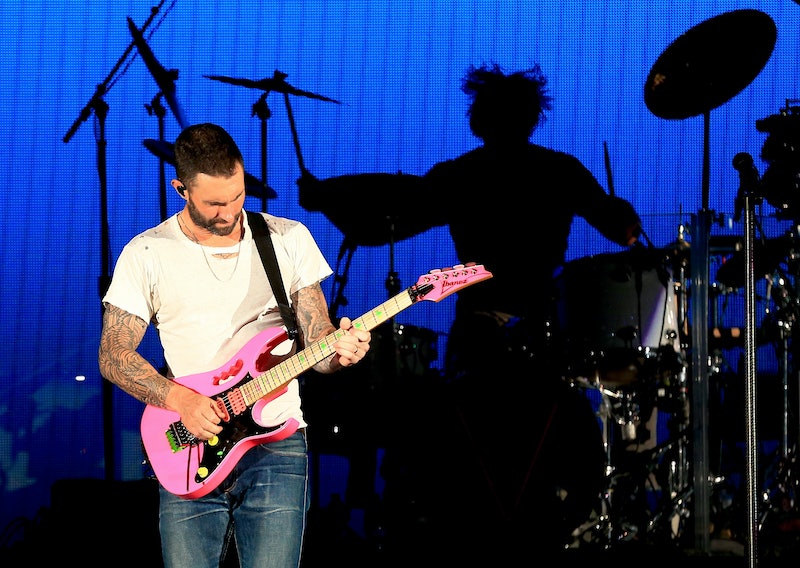 The new Kendrick Lamar/Maroon 5 hit "Don't Wanna Know" is a lot of things. A break up song that'll have you hitting the dance floor (and three whiskey and cokes later, will have you weeping in the bathroom). A tropical fusion between pop, dance and rap. The first Kendrick Lamar/Adam Levine collaboration since they both guest-starred on The Lonely Island's "YOLO" in 2013. But, as a song about intense yearning for your ex, it has me pretty confused: who is "Don't Wanna Know" about?

It's weird because both Adam Levine and Kendrick Lamar are happily coupled up. Adam Levine got married to Behati Prinsloo in 2014 and, in March, we found out Behati Prinsloo was pregnant, so presumably things are going great for that couple. As for Kendrick Lamar, the number of exes he has must be pretty damn limited. He's currently engaged to his extremely long term girlfriend. He and Whitney Alford have known each other since high school, and, when he toured in South Africa, local press referred to her as his "high school sweetheart" so, you know, presumably that means there's a chance they've been dating since then? All of which makes me all the more confused. Who on earth could this song be about?

Well, I think we're going to have to rule Kendrick Lamar's exes out, because, dear reader, King Kendrick is famously private. Even if there had been anyone apart from Whitney Alford over the past 10 years, we probably wouldn't know about them. Check out how cute these two were and still are. I'm calling this. There's almost no chance this song is about an ex of Lamar's.

But Adam Levine has been a lot more romantically prolific, so, if we were to assume this song would have any autobiographical relevance, I'd argue it's more likely to be an ex of Levine's than an ex of Lamar's. This theory seems all the stronger for the fact that Lamar only contributes one verse, while Levine covers all the pre-choruses, choruses, and other verses. Let's take a trip down memory lane.

This former Vogue editor was also Levine's high school girlfriend, who he dated for four years (1997-2001). The woman clearly had a lasting effect on Levine: she inspired an entire album of songs, Songs About Jane. So, you know. She was a big deal to him. If Levine's looking for inspiration for a song about heartbreak in a time of happiness, he could do worse than a deep dive into the point in his past that inspired songs like "Harder To Breathe," no?

Levine dated this model turned actress (How To Be Single, Delivery Man) slightly more recently than Herman — in 2009. They lasted for just a year. Since we don't know how they ended, there's a chance that she broke things off, leaving him smarting. Since she's a more recent ex than Herman, this might make more sense.

They met at a Sports Illustrated Swimsuit Issue party (Vyalitsyna's a model) before dating for two years (2010-2012). After they split, Vyalitsyna released the following statement: "Adam and I have decided to separate in an amicable and supportive manner. We still love and respect each other as friends. I wish him all the best." However, US Weekly reported that Levine was heartbroken by the split, which an unnamed source claimed was announced before Vyalitsyna had even told Levine. As such, she's definitely a contender to be the woman the song was written about.

So, here's where things get a little tricky. While Prinsloo and Levine now seem rock solid and totally loved up, this wasn't always the case. In 2013, Prinsloo and Levine briefly split and Levine dated Prinsloo's fellow Victoria Secret model Nina Agdal. This was just temporary, though. When Agdal and Levine split in May 2013, Levine went back to Prinsloo. This situation sounds complicated enough to be the subject of a song about an ex with whom the singer had an even more complicated liaison with.

All of that said, there's no hard evidence this song is autobiographical. Maroon 5 hasn't released a statement to that effect and, you know, maybe the band is just trying to sell music by writing a song about a theme that basically everyone on the planet can relate to — yearning for someone who wasn't good for you, but you used to be with. Still, if you're looking for a list of likely candidates as to whom the song was written about, the above is probably a great place to start.