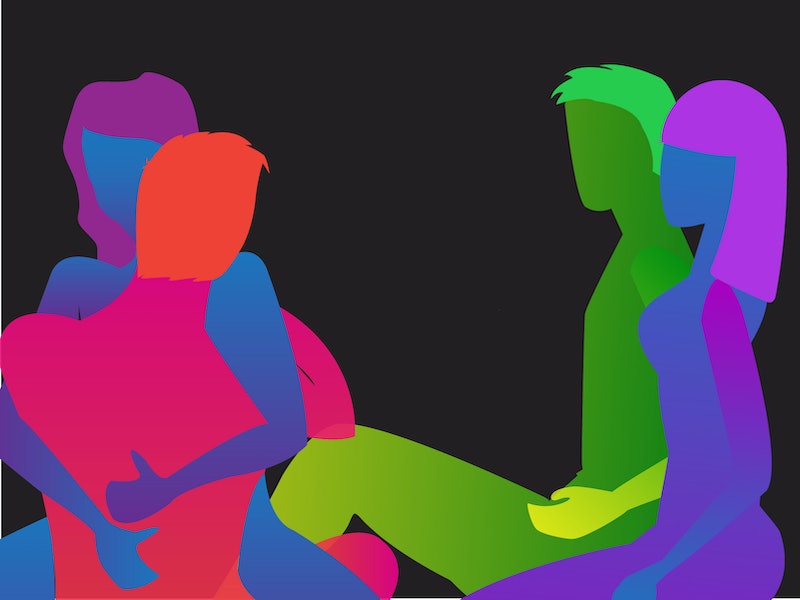 We’re always hearing that we could be having better sex, a better orgasm, or a better relationship. But how often do we hear the nitty-gritty of how we can actually better understand our deepest desires and most embarrassing questions? Bustle has enlisted Vanessa Marin, a sex therapist, to help us out with the details. No gender, sexual orientation, or question is off limits, and all questions will remain anonymous. Now, onto this week’s topic: the best sex positions for sex with another couple.

Q: “My partner and I have been talking about having sex with another couple. (Just FYI — we’ve had many discussions about it and have already sorted out conversations about boundaries, so we’re good on that front.) We’ve met another couple, and have had all of the introductory conversations about safety and what we are and aren’t looking for. Now I’m wondering the sex position logistics. We’re two male-female couples. We’ll be having sex with our own partners, and the opposite-sex partner of the other couple. The girls are interested in playing with each other a bit (kissing, touching), but no actual sex. What are the best positions for us to try out, both for foreplay and for sex?“

A: Thanks for the question! Sounds like you, your partner, and the other couple have put a lot of effort into responsibly setting up your group sex experience, which I really commend you for! All that hard work is going to make it much more likely that you have a super hot night. Here are eight recommendations for the best couple-on-couple sex positions.

(An important note: Given your question, I'm mostly focusing here on MFFM sex positions, but stay tuned for queer group sex ideas — though many of these could still apply to any gender combination, given the right props.)

How To Do It: This isn’t a position as much as another suggestion for how to get things going. Have one couple start having sex, in whatever position they please. The second couple gets to sit back and watch the first couple put on a show.

How To Do It: For something relatively straightforward at the beginning, you can start off with both couples in Missionary position (the women on their backs on the bed, with the men on top in between the ladies’ legs).

Why It Works: You might have a lot of other emotions running through your head during your first group sex experience, so you might enjoy keeping it simple to begin with. For the very beginning of the evening, you can make out, grope each other, or grind in this position. If the couples are positioned close enough to each other, you can start to reach out and caress the other couple. This position also works well whenever you transition to intercourse.

Why It Works: This is another very adaptable position. The couples can start off caressing and grinding up against each other. The men can pay particular attention to their ladies backs, necks, and ears. As things start heating up, the ladies can start playing with each other as well. You’ll also be close enough for the men to reach out and caress the other woman. This position also works for intercourse.

How To Do It: Have the man from one couple and the woman from the other couple sit next to each other on the bed. Their respective partners should kneel in between their legs and perform oral sex.

Why It Works: This is a another great position to get started in. You can swap in and out of your roles easily. The partners receiving oral sex can also start to kiss and play with each other.

Why It Works: This is a really over-the-top position that can be incredibly sexy. There’s so much going on, all at once. It feels like a hedonistic buffet!

Why It Works: If the men are in opposite orientations, this position should allow the women to be facing each other. You can watch each other move, kiss each other, or touch.

How To Do It: Both girls get onto their hands and knees. Their respective partners should be kneeling behind them. You can all be side-by-side, or the ladies can be facing each other, so you form a mirror-image.

How To Do It: The first guy lays on his back. The first girl straddles him, facing his head. She should lower down onto her elbows. The second guy crouches behind the first girl’s butt, and penetrates her anally. The second woman can choose to watch, or she can kiss or caress the first woman.

Why It Works: This is another really over the top, hedonistic position. The woman being doubly penetrated gets to be the star of the show, and can get more stimulation than she might be able to handle.

More like this
My Partner Wants Me To Wear A Diaper During Sex. Help!
By Sophia Benoit
50 Valentine’s Day Instagram Captions To Post If You’re Single
By Jessica Booth, Lexi Inks and Carolyn Steber
12 Aphrodisiac Desserts To Spice Up Your Valentine’s Day
By Kaitlyn Wylde
Here's Why Trash-Talking Your Ex Can Actually Help You Move On
By Genevieve Wheeler
Get Even More From Bustle — Sign Up For The Newsletter
From hair trends to relationship advice, our daily newsletter has everything you need to sound like a person who’s on TikTok, even if you aren’t.