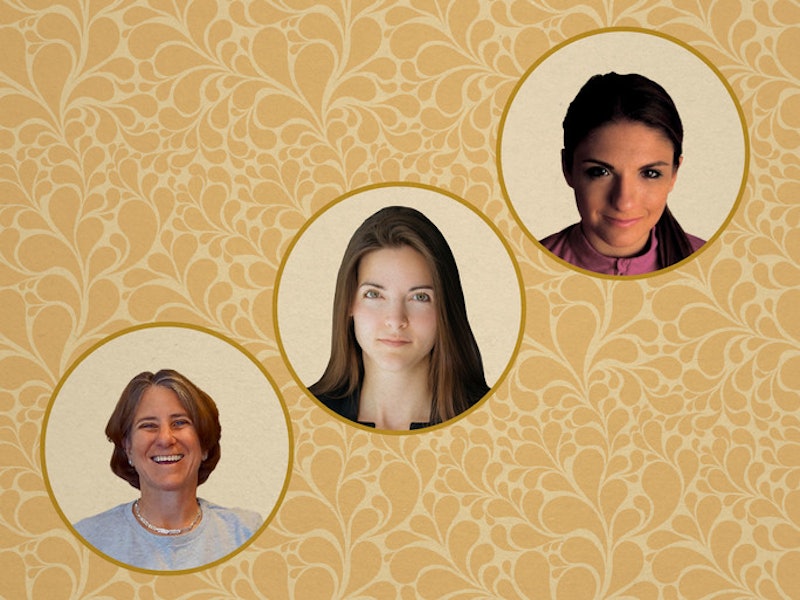 No matter what your field, age, or position, finding your voice is a process. In a world that codes female voices as less "authoritative," women especially have to contend with the added challenge of making their voices heard once they've found them. It's hard not to internalize this struggle, and even the most confident, self-possessed boss ladies have had to strive to make their voices heard.

Speaking up and speaking out is a huge theme in the Amazon Original Series Good Girls Revolt, based on Lynn Povich's best-selling memoir. The series follows three young women — Patti, Cindy, and Jane — all researchers at News of The Week, a prominent national news magazine in the 1960s. While they're devoted to their jobs and passionate about the news, their opportunities are restricted within a sexist institution that takes the women's scoops and puts men's names on them. We watch as these women speak up, speak out, and become part of a massive wave of social change — which gets stronger when they band together and demand to be heard.

Even today, when it comes to navigating inequality, there's no road map. But if you follow the trails blazed by the strong women before you, you can walk with confidence. We talked to three successful female entrepreneurs across a number of fields, from media to non-profit. Laura Beachy, co-founder of Beachy Media, Kathryn Minshew, CEO & founder of The Muse, and Dr. Ellen Markowitz, founder of PowerPlay, talked to us about what motivates them, how they've asserted their points of view, and gave the next wave of boss ladies some choice advice.

Her résumé: In 2011, Kathryn Minshew launched The Muse, a free professional advice hub and job search tool. By 2016, The Muse had grown to a network of over 5 million monthly users, including career coaches, job seekers, and employers. Her tremendous work with The Muse has earned her places on the Forbes' 30 Under 30 in Media list in 2011 and 2012, and Inc. Magazine's 15 Women To Watch In Tech in 2012. Before her tenure in tech, Minshew worked for the Clinton Health Access Initiative to expand vaccine access in Rwanda and Malawi.

What inspires her: "My co-founder and I wanted to reach out to women and build a platform that helped people navigate some of the most challenging early situations. To negotiate for a raise, to prepare yourself for a promotion, to deal with a difficult boss — but we also wanted to address situations that might be gendered … How to navigate the line between being assertive but not being called a 'bitch.'

"When I had to negotiate for a raise for the first time, I was so nervous at the prospect of asking for more money that I threw up in the bathroom afterwards … And I didn’t get that raise. [Laughs] I didn’t know how to ask. I didn’t feel like the more aggressive model of walking in and saying, ‘I need to be paid more! I deserve it!’ — didn’t appeal to me. I just feel like I didn't have someone I could go to to walk me through any of these issues, and that’s a big reason for why created the Muse."

A time she made her voice heard: “One early challenge was raising our seed money. We had didn’t have the size and scale and proof of impact as we do now. When I first set out to raise our first round of capital, we were turned down 148 times. That was hard. It was pretty awful. But I also learned that that rejection doesn’t kill you.

"I think the entire experience made me much tougher, and much more comfortable asking for things because I had to do it so many times over and over again. I also started to pay more attention to the assumptions people may have been making about me because of the way I looked, the way I talked, how often I smiled, and I became more adept at presenting myself and the company in a way that helped people see that I was really serious about building a big business.”

Advice to young women on leadership: “Look at the data, but trust your gut. What I mean by that: It’s really important to look at early feedback and sources of data on any new product, project, or initiative. But you can’t always let that be the whole story. You may be doing something so new that there’s no really good way to measure or evaluate it. You can’t be afraid to just trust your gut and move forward on an idea you believe to be true ... because if it were easy to prove, somebody else would probably already be doing it.”

Her résumé: Beachy is the co-founder of Beachy Media, a female-owned communications and design firm that specializes in the endurance sports field — specifically, running and triathlon. She left her full-time public relations job to establish Beachy Media in 2014 when she was just 24. Since then, she’s worked with a wide range of clients spanning from lifestyle brands to independent films.

What inspires her: “I love competition and thrive off a competitive drive. When we go to bid on a client and put in a proposal and win that business, it’s so satisfying knowing that somebody likes what you brought to the table enough to land you over another company.”

A time she made her voice heard: “About a year ago, I was hired as a marketing consultant on a project. The retainer was substantial, the largest monthly retainer I had booked up to that point. Obviously, I was excited. I flew out to the client's headquarters and spent a full week meeting with members of the team and digging into the brand. A week after I left, they had budget constraints and wanted to pay half of the retainer originally agreed upon in the signed contract.

"Allegedly the president of the company made comments [behind my back] that I was too young to be granted the amount in the contract. I had a choice — confront the issue head on and potentially lose the money or allow for the reduction and devaluation of work. It was the first time in my career where I had to make a tough decision about best practices versus money. I didn't budge. I made it very clear how I felt about the situation, in a direct manner. They ended up pulling the contract, but due to language in the agreement, they had to pay me out for 30 additional days of work.”

Her advice to young women starting out: “Don’t doubt yourself. … Approach both work and life with a calculated fearlessness. Be steadfast in your decisions. A lot of people are going to have an opinion [on something], but one person needs to take the lead. Are you going to take the lead, or be the person that follows it?”

Her résumé: Having founded the girls mentoring and leadership organization PowerPlay NYC, Dr. Markowitz helps to enrich the lives of girls through sports, training, and play. More recently, she founded SuperStarters Sports, a sport-based youth development program in Charlottesville, VA. She also currently serves as an Assistant Professor in Educational Psychology at the University of Virginia's Curry School of Education, as well as the Coordinator of the Master's program in Educational Psychology-Applied Developmental Science.

She holds an MBA in Marketing from New York University, an MA in Physical Education from Adelphi University, and a Ph.D in Applied Developmental Science and Sport Psychology from the University of Virginia’s Curry School of Education, and competes internationally as a USTA ranked tennis player.

What inspires her: "I am continuously inspired by people and "light bulb" moments, how individuals learn, grow and change. The moment when someone learns a tennis skill for the first time, or sees the power of a shout-out, or applies a theory to their own life, gains clarity on a career direction. I love contributing to individuals' positive development!"

On a time she made her voice heard: "I will always remember when we first began running programs [with PowerPlay]. There was a perception that 'girls aren't interested in sports' and it was hard for after school programs to carve out time for girls to have a gym alone without boys. I fought for this — and once we got in the gym, it was like magic. One of the most satisfying moments was when a little girl who was originally shy and quiet in the gym declared to a group of boys who wanted to come in during her program, 'It's our gym now!'"

Advice to young women starting out: "Listen well, build positive relationships, and cultivate a strong network. Positive, respectful relationships help drive change. Enjoy and find joy in the process. Celebrate the small wins as you go. I always say PowerPlay never felt like work, it was something that I loved creating and helping grow, and still do!"

More like this
25 Inspiring Quotes From Black Women To Celebrate Black History Month
By Kyli Rodriguez-Cayro and JR Thorpe
These Are The Fastest Electric Kettles You Can Buy
By Margeaux Baulch Klein
24 History-Making Black Women You Probably Didn't Learn About In School
By Ayana Lage and JR Thorpe
Twitter Has *A Lot* To Say About The "Single Penalty”
By Sam Ramsden
Get Even More From Bustle — Sign Up For The Newsletter
From hair trends to relationship advice, our daily newsletter has everything you need to sound like a person who’s on TikTok, even if you aren’t.