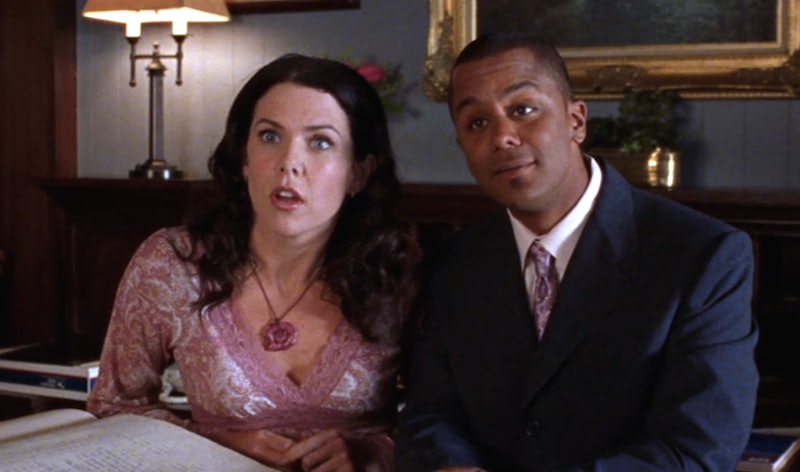 After spending years counting the blueberries on his pancakes and dropping the best snarky comments this side of Emily Gilmore's mansion, it looks like Lorelai's right hand man, Michel, is finally getting a personal life in the Gilmore Girls revival — and it is about time. While Michel himself, actor Yanic Truesdale, previously revealed in an interview with Us Weekly that fans would finally get to know who Michel is outside of the Dragonfly Inn, his latest Entertainment Tonight interview reveals Michel will be dating — as in dating a person the fans could actually meet. This is a huge step forward for Michel, and one Gilmore Girls should have taken a long time ago.

Michel is one of the only main characters whose personal life was never explored. There were mentions of dates occasionally, and Michel's mother was introduced — but beyond those things his life outside of work remained vague. In fact, the show would often play up Michel's stereotypically gay interests in things like Celine Dion and fad diets in a way that suggested he was gay while having him remain largely asexual. We never learned much about his life outside the inn, and that included his dating life.

Ultimately, whether or not creator Amy Sherman-Palladino decides to have Michel identify as gay, straight, or bisexual, the act of finally letting Michel have an actual life beyond his job and friendship with Lorelai is a powerful one. Michel is an integral part of the show, and a character whose wit is legendary, he deserves the same respect characters like Sookie, Kirk, and Lane were given. Michel needs to be more than his interests because everyone is more than the stuff they like.

"Michel has grown into someone who has a love life, which we've never seen before," Truesdale told ET. "He would go on dates, but it was very vague — we didn't see anyone or see the dates — so we'll get to know much more about who he is personally."

Knowing Michel will have someone special in his life is one of the coolest bits of news to be revealed about the revival so far. Michel deserves a storyline all his own that has nothing to do with accidentally rolling baby Davey under the bed. A man as confident, smart, and funny as Michel should have a personal life as interesting as his finely crafted comebacks, and it looks like after all these years, he is finally getting one.