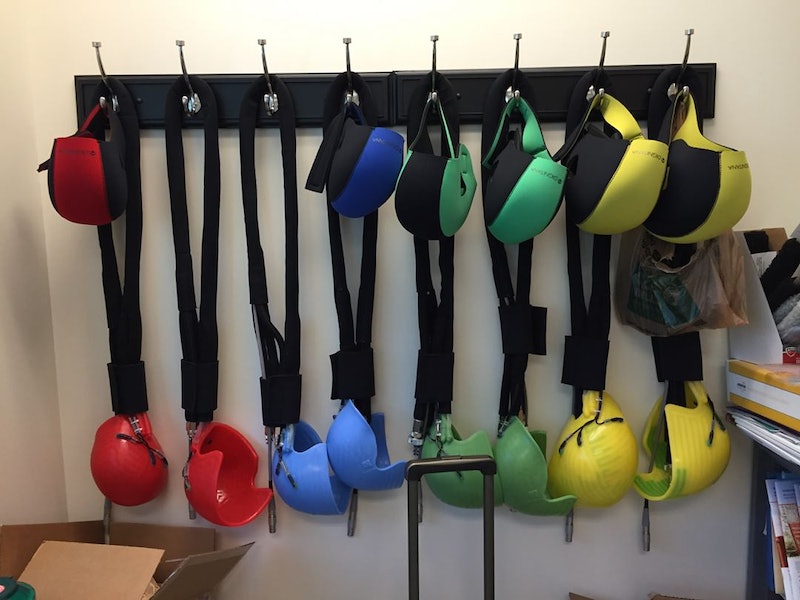 As women, we have the luxury of making the conscious choice every day about how we want to wear our hair. Cut it short? Dye it hot pink? "Forget" to wash it for the better part of a week? We have the freedom to make whatever hair decisions we want — the good, the bad and the really, really ugly (like the time I cut straight-across bangs with a pair of nail clippers). However we choose style it, our hair is a part of who we are and how we choose to portray ourselves to the world.

For women fighting cancer, this "luxury" that most of us take for granted is often stripped away when they undergo chemotherapy. As if it wasn't a shitty enough disease in general (I lost my dad to cancer earlier this year, so have a particularly personal bone to pick with it), fighting it has traditionally meant losing your hair. "It’s like kicking you when you’re down," says Heather Chemtrov, a 37-year-old woman undergoing treatment for breast cancer. "Like, oh you’re sick and you have to do all of this, and now I’m going to take away all your hair, too."

To a certain extent, being bald has become somewhat synonymous with having cancer, but thanks to a new device called the "Dignicap," that's all about to change: Women with cancer are going to have the freedom to decide whether or not they want to keep their hair during treatment.

The Dignicap is a scalp-cooling system that was recently approved by the FDA and helps minimize hair loss for women undergoing cancer treatment. Before beginning a round of chemo, the patient places a cap over her wet hair. The cap releases coolants that chill the scalp, which constricts the blood vessels around the hair follicles to limit the amount of chemotherapy chemicals that reach the area.

"Imagine a really thick swimming cap," says Christine Dittmer, who's been using the Dignicap over the last few months during treatment for breast cancer. "It sounds like it should be really cold the whole time, but you get used to it. It feels kind of snuggly." Basically, the cap freezes the hair follicles so that the medicine going into the rest of your body can't get into those cells, and the chemicals won't kill the hair the same way they're killing everything else in your body.

"Many women identify chemo-induced hair loss as one of the most traumatic parts of cancer treatment,” says Hope S. Rugo, M.D., Director of breast oncology and clinical trials education at the UCSF Helen Diller Family Comprehensive Cancer Center and principal investigator of the DigniCap FDA Trial. “By avoiding or at least significantly reducing the hair loss associated with many of our chemotherapy regimens, women being treated for breast cancer are more able to carry on with their normal activities without the visible marker of cancer treatment. They retain greater privacy and control at a time when they need it the most."

For Chemtov, keeping her hair while she underwent treatment for breast cancer meant that she could go about her daily life — to the grocery store, to workout classes, to events at her daughters' school — without ever having to tell anyone she was sick. "If I tell people, it's my choice. It's not my body telling anyone for me."

Using the Dignicap not only allowed Chemtov to maintain her privacy in public, but it also allowed her to protect her kids from her disease. "If I was bald, I would have to explain to my daughters why," says Chemtov. "I would have to expose them to a whole set of harshnesses of life that right now they don’t even know are happening to me. I am almost on my last phase out of this process, and don’t know that I had cancer, and I was able to keep their world safe and perfect and not think that there’s something wrong with me. They go to school, I go to chemo, and they come home and are none the wiser."

For some women, the idea of losing their hair is enough to make them question skipping treatment altogether. "I was shocked ot hear from my oncologist that some women don't get chemotherapy because they dont want to lose their hair," Dittmer tells me. "I have a great deal of admiration for women who go and do everything [without their hair], but i wanted to keep my privacy and dignity as much as I could."

Having the ability to keep her hair helped Dittmer mentally and physically because it allowed her to feel as normal as possible under incredibly difficult circumstances. "I can't imagine going through what I went through and having the additional indiginity of having to lose my hair," says Dittmer. "I have long, thick hair and thats part of who I am. I didn't ever want to look in the mirror and look like a sick person”

The Dignicap is not yet the perfect solution, but it’s getting there. There are certain types of cancer the machine won’t work with, and even with perfect use, women will still lose some hair during the chemotherapy process. “I would still highly recommend it to anybody,” says Chemtov, “You definitely do have hair loss, but it’s still well worth it to do it instead of having to go bald and grow your hair.” In a clinical trial, 70 percent of patients kept more than half of the hair on their head, which was a really big deal.

For some women, losing their hair during treatment may not be at the top of their list of concerns when they're diagnosed with cancer, and so, so many of them rock their bald heads like total badasses. "I can't imagine going through what I went through and having the additional indiginity of having to lose my hair," says Dittmer, though not every survivor might agree. The point of the Dignicap is to empower women to be able to have the power to choose whether or not to keep their hair, and to be able to do what makes them feel best during a difficult process.

To learn more about the Dignicap and to donate to help women pay for their scalp cooling treatments (which are not covered by most insurance providers) visit www.HairToStay.org.