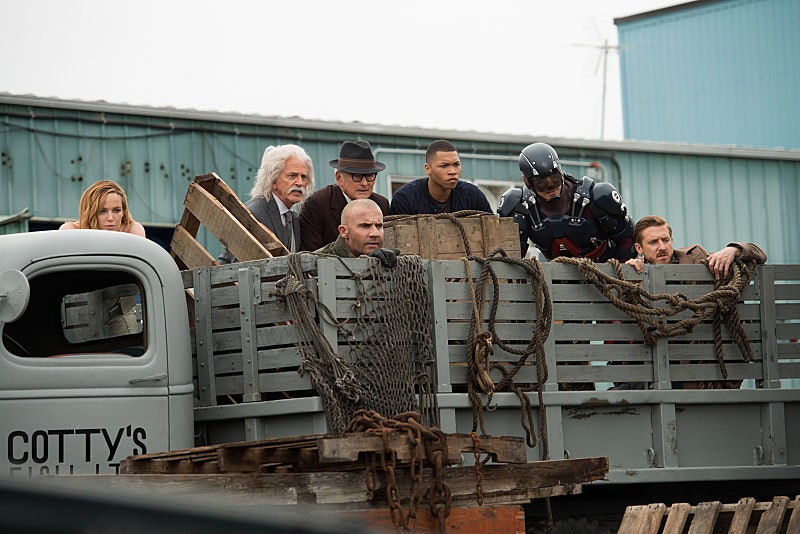 What happens when you align a powerful speedster with a supernatural villain? That's a question the Legends of Tomorrow Season 2 premiere sought to demonstrate. The band of heroes may have saved New York City from falling victim to an atomic bomb attack, but their troubles are far from over. I say this not to be a pessimist, but because of the surprise alliance that was introduced at the end of the hour. You see, Damien Darhk hasn't been working alone in his plans of destruction. In fact, he's partnered up with a very familiar speedster that I'm sure Flash fans immediately recognized as the Reverse Flash himself, Eobard Thawne. So why are Damien Darhk and Eobard Thawne working together? Whatever their plans are, I can assure you it'll only lead to no good.

Not that I'm complaining, of course. The Reverse Flash is a great character to bring into the Legends of Tomorrow fold. Plus, it's a great way to set up the eventual four-way crossover that's going to happen later this season. So if you were wondering what could bringing all of our favorite superheroes together, this would definitely be it. I mean, these two villains were formidable opponents on their own, so creating an alliance between them will make for quite the challenge.

I have no idea what their motivation is (world domination?) or even how they met each other in the first place (is there a villain Facebook group?), but what I do know is that this season just got a whole lot more interesting. Heck, maybe this even explains how the time machine's console, Gideon, comes to work for Thawne at some point down the line. For all we know, they crossed paths long before he ever set foot in Central City. Either way, this sets the scene up for a wide range of possibilities and I can't wait to see how it all unfolds.