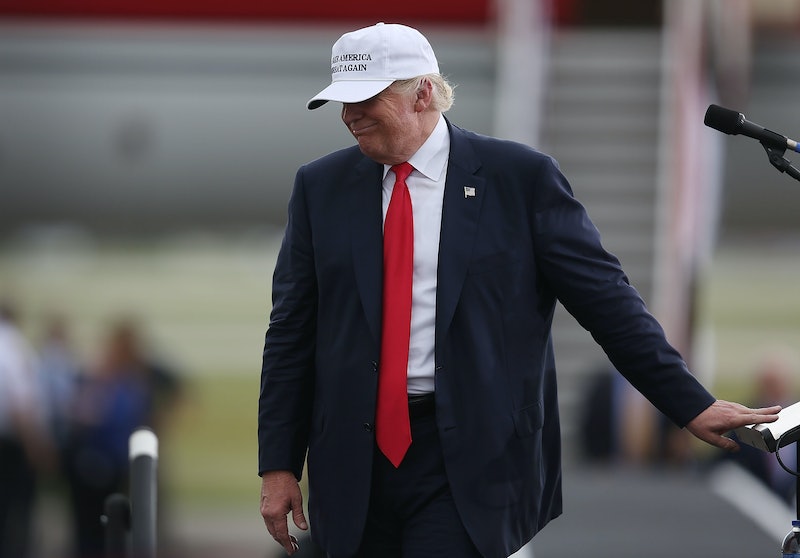 In an Entertainment Tonight video from 1992, the 2016 Republican presidential nominee had a brief conversation with a 10-year-old girl that will turn your stomach. Donald Trump told the young girl he'd be dating her in 10 years.

Don't think that's a big deal? Picture this. Picture this. You're in fifth grade or so, making a list and shopping for toys at the store with your mom during the holiday season. Maybe you're hoping for Barbie's Dream House, a new Sega game, or the latest Polly Pocket. And while you're looking around, thinking about what 10-year-olds think about, like toys, some 46-year-old man stops you as you head toward the escalator to tell you he'll be dating you 10 years from now. If you can't put yourself in the shoes of a child, imagine you were her parent. That doesn't sound sick?

That situation is precisely what happened 24 years ago. In a filmed Christmas feature for Entertainment Tonight, a then-46-year-old Trump was videoed asking a young girl if she was going up the escalator. When she replied yes, he said, "I am going to be dating her in 10 years. Can you believe it?"

As CBS News pointed out, this isn't the first time Trump has made questionable comments regarding women who were much younger than him. There's his infamous reference to dating his daughter Ivanka, as well as the time he said he wasn't sure if his daughter Tiffany — who was a literal baby at the time — would get his wife's breasts or not. He once told Howard Stern that when he first saw Paris Hilton walk into a room, he said, "Who the hell is that?" and said he thought she was beautiful. She was 12.

And just recently, allegations arose that he entered the dressing room of Miss Teen USA contestants, some of whom are under the age of 18. Bustle has reached out for comment on those allegations. However, he told Stern in 2005 that he did, at least, go into the dressing rooms of the Miss USA contestants, saying, "You know, no men are anywhere. And I'm allowed to go in because I'm the owner of the pageant. And therefore I'm inspecting it. ... You know, they're standing there with no clothes. ... And you see these incredible looking women, and so, I sort of get away with things like that."

Before you use the argument that the "media" is dredging up old, irrelevant videos of Trump to take down his presidential campaign, think about these two things. First, these videos exist. They are not made up. This happened, and if you think it's making Trump look bad, that's his own fault for saying things that are now making him look bad. Second, these videos may be old, but it speaks to Trump's character. If you want to say "people change," remember that this is not a young man saying something dumb to a child. Trump was 46 years old at the time, more than old enough to know better. And, heck, in the 2005 Access Hollywood video he's trying to pass off as "locker room talk" that many are defending by saying he's changed since 11 years ago, Trump was 59.

By 46, I'd imagine you're pretty well established as a person who's lived life and had enough experiences to know who you are and what your morals and values are. And well, who Trump was was a guy who said he'd be dating a 10 year old in 10 years. Think about that.