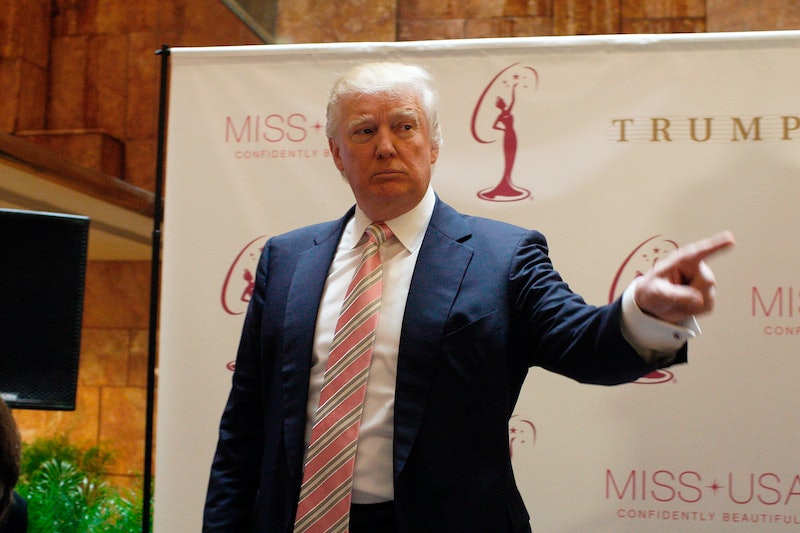 Policies aside, Republican presidential nominee Donald Trump is not known for his admirable treatment of women. The hot mic tape from 2005, for example, in which he condones groping women without permission, was all many Republican politicians needed to abandon their support of the nominee. In the wake of Trump's downward spiral, Democratic nominee Hillary Clinton has unveiled a new campaign tool that pits her record with women squarely against that of Trump. Spoiler alert: The result is pretty much exactly what you'd expect if you've been following Trump's campaign even a little bit.

First, let's look at some of the most damning evidence of Trump's outlook on women. Prior to the second debate, The Washington Post published a transcript of a 2005 recording of a conversation Trump had with then-Access Hollywood host Billy Bush. In the recording, Trump can be heard saying that he doesn't "even wait" before kissing a beautiful woman. "And when you're a star, they let you do it," he said. "You can do anything." Trump chalked the recording up to "locker room talk" during Sunday's presidential debate between him and Clinton.

Enter, Clinton's latest campaign tactic: a tool that promises to show side-by-side comparisons of the candidates' careers over the past several decades. The tool asks users to click "Shuffle." After doing so, a screen appears with a year on it and descriptions of what each candidate was doing in that year.

Many of the available screens chronicle Clinton's work with minorities and children, as well as Trump's work in the real estate industry. The most fascinating screens, though, show the contrast between Trump's record with women and Clinton's own reputation among women. It's clear from Clinton's tool that Trump's scandals concerning women are nothing new.

For instance, Clinton's tool claims — among other things — that when Trump took over the Miss America pageant in 1995, he made the "bathing suits... smaller" and the "heels... higher." That claim appears to be part of a direct quote from the Donald during an appearance on David Letterman's show in 2010. Five years prior to that appearance in 2005, Trump spoke with Howard Stern and bragged about the way he'd walk into the Miss USA dressing room while contestants were naked.

I'll go backstage before a show, and everyone's getting dressed and ready and everything else. You know, no men are anywhere. And I'm allowed to go in because I'm the owner of the pageant ... You know, they're standing there with no clothes. And you see these incredible-looking women. And so I sort of get away with things like that.

Another placard claims that Trump in 2004 called pregnancy an "inconvenience" for employers. That allegation appears to refer to a quote from Trump during an interview with NBC's Dateline. In the segment, Trump called pregnancy "a wonderful thing for the woman... a wonderful thing for the husband... [but] it's certainly an inconvenience for a business."

During his current presidential campaign, Trump has been relatively moderate on issues like paid family leave and affordable child care, largely thanks to his daughter and closest advisor, Ivanka. In September, for instance, Trump called for making child care costs tax deductible for many American families and guaranteeing six weeks' maternity leave for new moms, according to CNN. The small steps forward, however, do nothing to erase the numerous instances he's disrespected women — both in the past and now.

Ultimately, Clinton's new campaign tool shows that she and Trump have led very different careers. Although many of the criticisms levied by the online tool reference Trump's many bankruptcies and lawsuits, he should probably be most concerned about the references to his treatment of women. But then again, he rarely apologizes, so don't expect him to change his ways anytime soon.