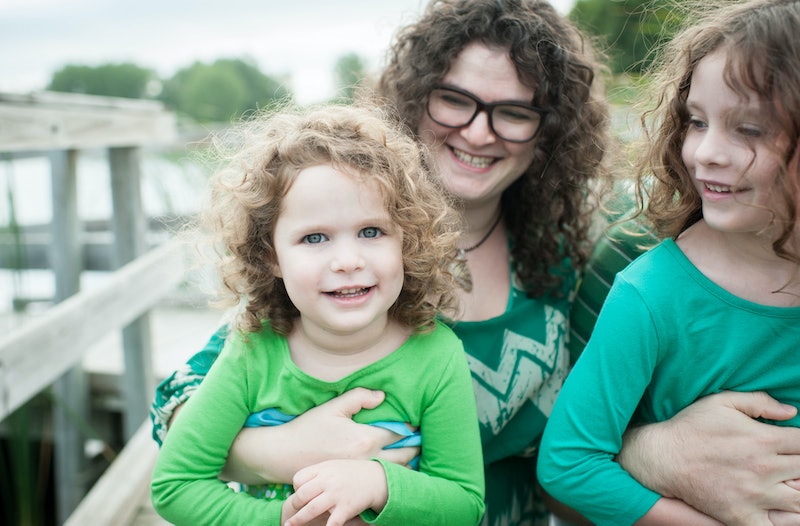 When Hillary Clinton accepted her party’s nomination, I let my daughters stay up to watch her speak. I turned on the livestream, and set my tablet on the table so my family could watch during dinner. My children were in awe. I had never allowed such things before. Television at the table was a novelty they had never even imagined. Khizr Khan took the stage with his wife Gazala, and as he spoke, my six-year-old daughter whispered in my ear. “Why are you crying?”

“I’m having really big feelings, honey,” I said. “I’m mad because Donald Trump said mean things about their son, and I’m sad because they are so proud of him and they love him so much and it hurts them to hear those things.”

She looked at me solemnly, and nodded. “I’m having really big feelings, too.”

After we’d moved to the living room, I watched my four-year-old waving the little American flag that had been in her hand nonstop since the Independence Day parade. She waved it gleefully as Xavier Becerra spoke about Hillary Clinton’s plan to send all four-year-olds to preschool, and my six-year-old leaned over again. “Mommy? Are you having more big feelings?” I wiped tears from my eyes.

“Yes, sweetheart. I’m happy because I want all of you to have a good life, and my heart is too full to keep my feelings inside.” She hugged me, and we watched Hillary Clinton take the stage. My other six-year-old chattered through the entire speech.

“She looks like grandma!” she squealed. And I cried, as I thought of my grandmother, who had been kicked out of college when she became pregnant.

“She’s a mommy, like you!” my daughter shouted. And I cried, because the idea of being president was something I toyed with many times in my youth, and I always wondered how realistic that could have been, having never seen a woman in a role like that. Hillary Clinton gave a speech that wasn’t exactly awe-inspiring to me, but was rich in plans and optimism. And when it was done, I felt good about the world I was raising my daughters to join.

My good feelings are long gone.

Now, when my daughter catches me crying after hearing the news, she asks, “Are you having big feelings?” And I can’t answer her.

Michelle Obama didn’t come out as a victim of sexual violence, but she didn’t have to. All of the millions and millions of women in the United States who have been victims, we knew she was speaking to us.

My three daughters, two in first grade and one in preschool, do not know that I work as an advocate for victims of sexual violence. They don’t know Donald Trump is on tape talking to a little girl, barely older than them, saying he’d be dating her in ten years. My daughters don’t know he said he could grab them by the genitals and get away with it. They don’t know that in December, he will have to stand in front of a judge and address the allegation that he raped a 13-year-old girl.

On Thursday, Michelle Obama delivered an emotional speech about how hard it can be for us to imagine the struggles our mothers and grandmothers faced. She was right. It is hard for me to imagine that when I withdrew from college temporarily, as my twin pregnancy had put me on bed rest, that I could have been kicked out for getting pregnant, just like my grandmother.

Michelle Obama talked about how hard it can be for us to imagine that now, we are fighting the same battles. She spoke with her voice full of emotion, and at every second I expected her to say, “I know, because I’ve been there,” not only because of the pain in her eyes but because every woman has a story to tell. The story of when they thought they were going to be raped, or their professor intimidated them sexually, or their boss made lewd remarks, or they were groped, or assaulted, or more.

Michelle Obama didn’t come out as a victim of sexual violence, but she didn’t have to. All of the millions and millions of women in the United States who have been victims, we knew she was speaking to us. And although it was a speech that touched on sexual crimes, on misogyny and hatred and the dehumanization of women and girls, I would watch that speech with my daughters. I would cry and tell them they have a future and I am excited for them and I am proud and also sorry, because as she said, there is so much work to do, and it will be their work, too.

I would never dream of letting my children watch Donald Trump speak. Not because I disagree with him politically, but because I am afraid of having to share the big feelings he gives me.

I’m afraid of having to introduce my daughters to the fear Michelle Obama described of walking down the street while strange men harass and intimidate you. I am terrified of having to muddy their souls with the understanding that a man who is weeks away from potentially becoming the most powerful person in the world believes every man says what he says, does what he does, believes what he believes. I am afraid because Donald Trump represents a threat to all women.

When election night comes, I am letting my children stay up again. I will let them stay up and see the first president in our country’s history who looks like them, and when my big feelings come I will not be afraid to tell my children why I cry. I will tell them, “I’m proud,” and mean it in every way, as I see in them all the potential Donald Trump never could.