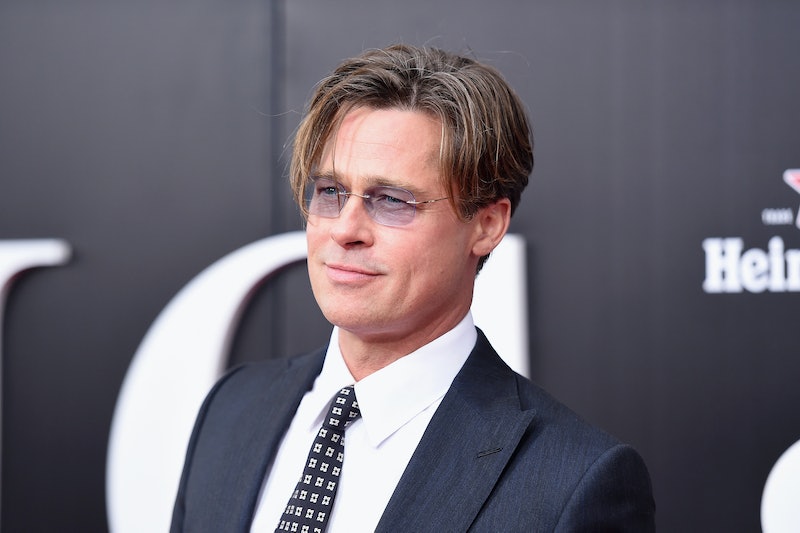 There is a new development involving Brad Pitt and Angelina Jolie. According to People, Brad Pitt reunited with his kids on Oct. 8 for the first time since his split from Jolie was announced in September. It's unclear which children were present, but People reports that not all the kids were in attendance. There was also reportedly a therapist present, which is part of the temporary divorce agreement recommended by the Los Angeles County Department of Children and Family Services (DCFS), TMZ claims. Bustle reached out to Pitt's rep about the report that he reunited with his children, but has not yet received a response.

The agreement, according to a September TMZ report, allegedly gives Jolie full physical custody of their six kids (which is what she reportedly requested in her initial divorce filing) and grants Pitt temporary visitation rights. It was also reported that the agreement only allows Pitt to see his kids with a therapist present until the 52-year-old actor is considered fit to parent without supervision. Both Jolie and Pitt will each undergo individual counseling, in addition to family counseling with their kids, until the agreement expires on Oct. 20, TMZ claims. At the time of TMZ's report, Bustle reached out to reps for Pitt and Jolie for comment, but did not receive a response.

After their divorce was announced, details surrounding an alleged altercation between Pitt and his 15-year-old son, Maddox, surfaced. Before Maddox's name was even mentioned, there were reports that Pitt was being investigated for alleged verbal and physical abuse stemming from an alleged altercation on a private flight with Jolie and his children from France to the U.S. At the time of the report, Bustle reached out for comment from Pitt and Jolie's reps, but has yet to hear back.

According to The Hollywood Reporter in September, the DCFS would not confirm or deny whether it was investigating Pitt regarding the rumored incident on the plane. DCFS spokeswoman Amara Suarez said, "We have very strict confidentially laws that don't allow us to confirm or deny the subjects of our investigations." Soon after, news broke that the rumored case was being referred to the FBI. As TMZ reported at the time, the reported altercation happened midair from France to the U.S., which means the LAPD wouldn't have jurisdiction, but the FBI would. The FBI released the following statement to Bustle regarding the matter: "In response to your inquiry regarding allegations within the special aircraft jurisdiction of the United States; specifically, an aircraft carrying Mr. Brad Pitt and his children, the FBI is continuing to gather facts and will evaluate whether an investigation at the federal level will be pursued."

A source told People in October that Pitt will go above and beyond to see his kids: "Brad loves his children more than anything in this world, and they matter more than anything else to him. He will do whatever it takes to be with them, now and always."

Both Pitt and Jolie released statements after their split was announced. Pitt's brief statement to People read, "I am very saddened by this, but what matters most now is the well being of our kids. I kindly ask the press to give them the space they deserve during this challenging time." As for Jolie, her lawyer said, "This decision was made for the health of the family. She will not be commenting, and asks that the family be given its privacy at this time."

More like this
‘RHOA’s Shereé Whitfield’s Boyfriend Tyrone Gilliams Hinted He’s Single
By Brad Witter
Where Is Oscar Torres In 'Only Murders In The Building' Season 2?
By El Hunt
Zawe Ashton & Tom Hiddleston Are Pregnant With Their First Child
By Bustle UK
The “Beatrice Six” Were Awarded $28 Million After Their Wrongful Convictions
By Brad Witter
Get Even More From Bustle — Sign Up For The Newsletter