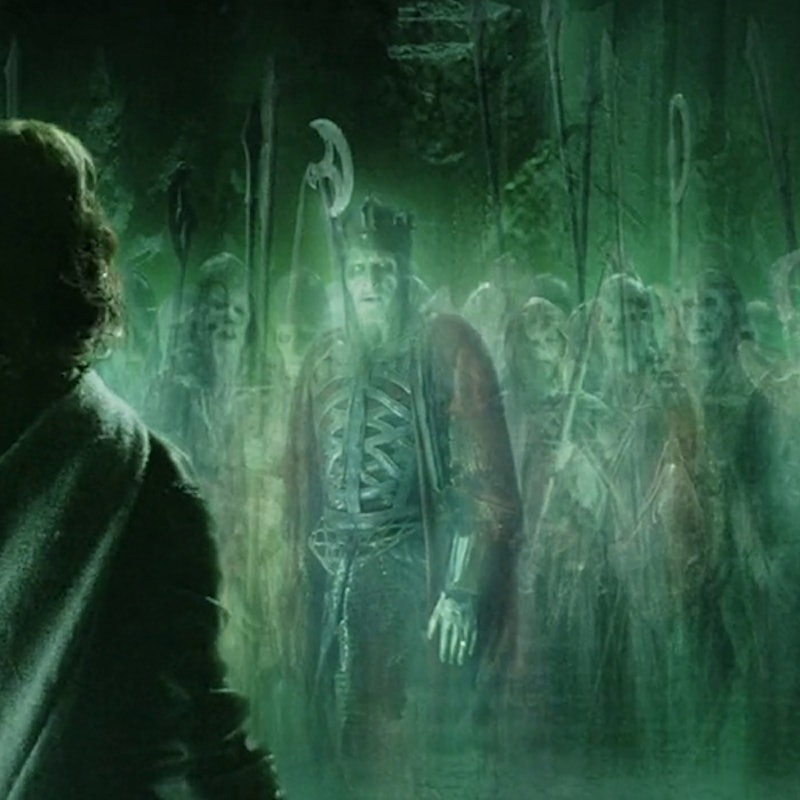 October is the official month of candy corn and creepy ghost stories. And boy is literature full of ghost stories. Now, I know that ghosts aren't quite as sexy as vampires or werewolves. They aren't as gross as zombies, and they certainly aren't as annoying as those guys running around dressed as killer clowns. But when you're home alone, late at night, and you think you see a shape just out of the corner of your eye—suddenly ghosts are the most terrifying (and plausible) of things that go bump in the night. So here are 13 of the creepiest, spookiest ghosts that literature has to offer.

Not every literary ghost is creepy, to be fair. Moaning Myrtle isn't trying to murder anyone. Marley from A Christmas Carol just kind of wants to rattle his chains and hang out. Casper from the Casper the Friendly Ghost comics seems pretty all right (though he died pretty tragically.) But for every Myrtle weeping in a toilet, there are hordes of nasty ghosts just waiting for you to let your guard down. So if you're looking to have haunted dreams this Halloween, here are a few literary ghosts to check out:

Daddy Hamlet doesn't do too much haunting, but he does show up to ask Hamlet Jr. to avenge his death... which just seems like too much pressure to put on poor grad student Prince Hamlet. The only thing scarier than a ghost, after all, is a ghost plus your father's disappointment.

2. The Ghost of Christmas Yet to Come

A Christmas Carol may not be a Halloween ghost story, but it's certainly one of the most famous ghost stories of all time. And the Ghost of Christmas Yet to Come is one of the most chilling phantoms in literature: he's a silent, hooded figure, whose only purpose is to show you that you're going to die and no one will even care. Yikes.

Toni Morrison's Beloved begins with the sentence: "124 was spiteful. Full of a baby’s venom.” It just gets creepier from there. The titular Beloved is the ghost of a baby who was murdered by her own mother (to prevent her living a life of slavery). If you're already disturbed... well, just read the book to see how far a baby's vengeance can go.

Before Rebecca was a creepy Hitchcock film, it was a creepy Daphne du Maurier novel about how you shouldn't trust housekeepers. Rebecca herself was a beautiful sociopath, murdered by her husband in an apparent "boating accident." Rather than haunt anyone outright, she exacts her ghostly revenge through Mrs. Danvers, her supremely creepy and devoted servant.

Let's face it: little kids are just inherently creepy. Henry James knew that when he wrote The Turn of the Screw. A governess is hired to look after two seemingly adorable little charges... until she realizes that the kiddies are being manipulated by the ghosts of the previous governess Jessel, and her weird boyfriend, Quint.

6. The Ghosts of the Overlook Hotel

The Shining by Stephen King has more than its fair share of utterly horrifying ghosts and living shrubbery. The film adaptation has immortalized the Grady sisters as the most recognizable Overlook ghosts, but really everything little Danny sees in that hotel is 100% sleep-with-the-lights-on creepy.

7. The Woman in Black

If you're looking for a traditional gothic ghost, you can't get more classic than Susan Hill's The Woman in Black. She's the type of ghost who hangs around an old mansion and makes you hear howling out on the moors. Try not to get on her bad side, though, because she will crash your carriage into a tree.

Father Hamlet isn't the only creepy Shakespearean ghoul. In Macbeth, the titular Scottish king is throwing a banquet, because that's what kings do, when he sees his BFF Banquo (who he had murdered to cement his power) waltz in, dripping with blood, and take a seat at the table. And no one else can see the ghost. It might just be Macbeth's conscience tripping him out, but either way it's terrifying.

9. The Heart in The Tell-Tale Heart

Speaking of a guilty conscience, nothing says "I feel bad about that murder I committed" like hearing your victim's heart beating under the floor boards. Whether Poe meant the heart to be an actual ghost is for you to decide, but it's definitely one hell of a creepy idea.

10. The Ghosts of Hill House

Stephen King says that one of his chief influences for The Shining was Shirley Jackson's The Haunting of Hill House. So... yeah. That should give you an idea of just how hideously scary the creeps in Hill House are. These spirits appear and disappear, sink their fingers into your arms when you're sleeping, and that's just the start...

11. The Ghost from The Big Toe

Every last ghost and goblin from Scary Stories to Tell in the Dark is the scariest ghost. All of them. But the one ghoul who always stuck in my mind was the toe ghost from the story The Big Toe. I mean, this kid and his family eat a big toe that they find in the ground, so of course a ghost rolls up looking for his missing toe. What could be scarier than realizing you've eaten part of the ghost that's after you?

12. The Dead Men of Dunharrow

A ghost army is pretty terrifying, even when they're helpful. Tolkien's Middle-Earth has plenty of gross and frightening folk running around in it without the ghosts. But the Dead Men of Dunharrow show up to fight nonetheless, in all their creepy, dead glory.

Washington Irving's The Legend of Sleepy Hollow is a short story with a long legacy of scaring people out of their pants. Most people don't even remember that in the original story, it's heavily implied that the horseman wasn't a ghost at all, but was an elaborate prank to scared Ichabod Crane out of town. Still, the image of the ghostly horseman has endured. Don't hang out in New York swamps at night, just to be safe.