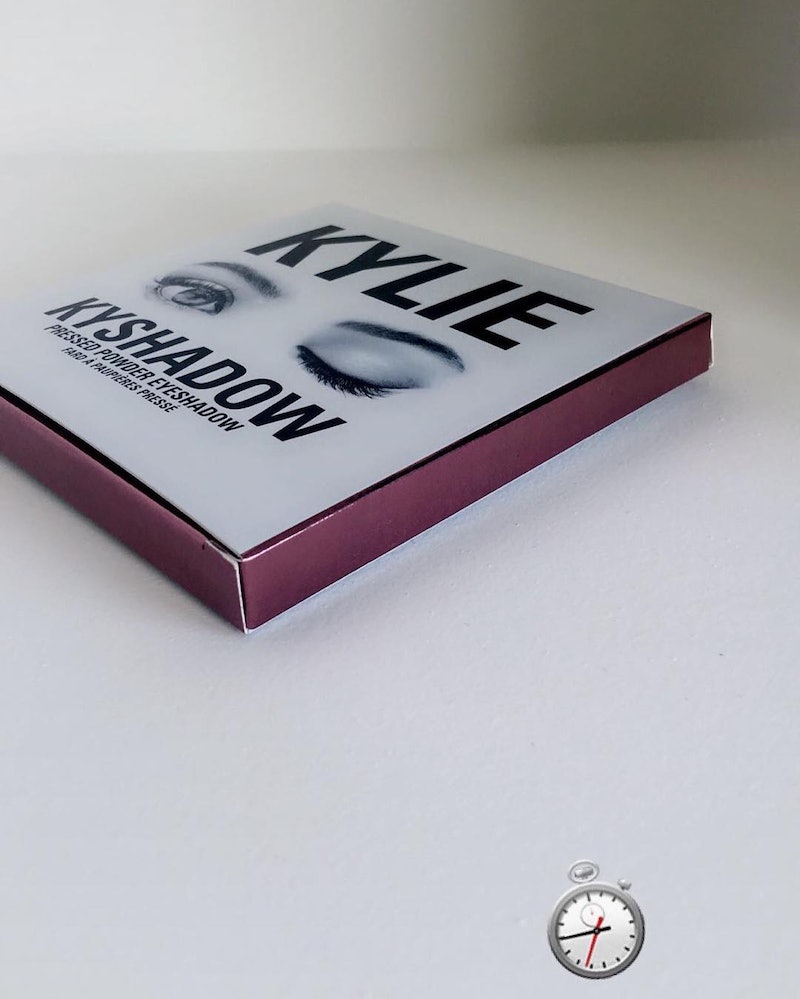 Kylie Jenner has officially cornered the market on celebrity makeup. It's hard to keep up with the mogul's growing makeup line, but fans know when things are coming, and they've been waiting for new shadows. On Friday, Kylie Cosmetics' new KyShadow palette's packaging made its online debut, and it's even better than people expected. After the success that was the KyShadow Bronze Palette, the hype surrounding Jenner's new palette was totally legit, and based on the image of the packaging that Jenner posted, it's going to be a wine and purple hued gem.

Jenner has been open about her struggles to craft the latest, ideal palette. Apparently, nothing short of perfect would do, and in a Snapchat video, she even admitted to stopping production of the palette because it wasn't what she envisioned. Now, however, things are ready to go. Plus, the timing of her new KyShadow showcase makes total sense. Her fall lip kits just debuted for sale on Wednesday and were sold out in only a few hours.

If the last KyShadow debut is any indication, the latest Kylie Cosmetics palette is going to sell out just as quickly. Plus, people have been anticipating a potential wine or berry hued palette for some time now, and in the image on the Kylie Cosmetics instagram, it seems things have been confirmed.

As of press time, Jenner hadn't revealed the content of the palette. However, the former KyShadow packaging had a coppery bronze strip around it. The new iteration features a purple and wine hued color. Despite no shadows being shown, Twitter fans are still freaking out and for good reason.

Who could blame them? If the palette is wine and purple hued like the packaging is suggesting, it's totally on trend for fall. Warm berries and wines are all the rage, just look at the Anastasia Beverly Hills Modern Renaissance Palette.

Basically, fans are shook over the new KyShadow, and if Jenner is to be believed. It won't be too long until they see the full thing.

More like this
Looking Back At Kylie Jenner's Best Fashion Week Looks
By Allie Fasanella
Kylie Jenner Wore A Stunning Corset Dress For Paris Couture Week
By Dominique Norman
Kylie Jenner Clarified How To Pronounce Her Son's New Name
By Jake Viswanath
42 Black Owned Fashion & Beauty Brands To Support Today & Always
By Mekita Rivas, Shea Simmons, Kui Mwai and Dominique Norman
Get Even More From Bustle — Sign Up For The Newsletter
From hair trends to relationship advice, our daily newsletter has everything you need to sound like a person who’s on TikTok, even if you aren’t.