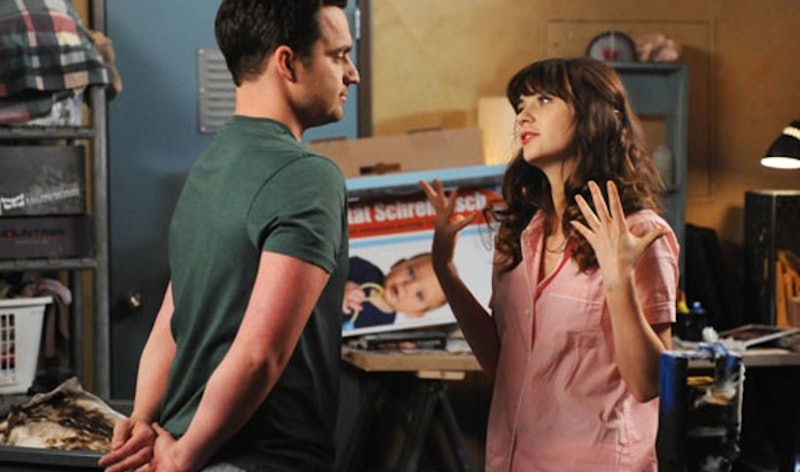 This is a predicament that I never expected to find myself in: typically, it's my exes that are telling me to back off when they're in a new relationship. They're telling me that their new partner isn't comfortable with the fact that we're friends. They're telling me that I need to take pictures down from Facebook. They're asking for their things back. I've never been in a position where I've actually thought, "Wait a minute, is my ex being fair to his new partner by carrying on this friendship with me?"

Personally, I think it's great for exes to stay friends, if it's natural to. Some partners are actually better off as friends, and after some initial separation, it's easy to transition into a friendship. But some exes fall in their weird in-between space of having a history and not knowing how to exist appropriately in the present. And while it can feel great to have your ex reach out to you (it makes you feel like you're still important to them and matter to them), it can be confusing. And for the sake of paying it forward and knowing girl code, you have to stop and think about the person they're in a relationship with and how your friendship affects that. They're the future, you're the past.

Sure, in a perfect world, we'd all be mature and get along and there's be no hard feelings or jealousy but that's not the way it is. So you might have to make some accommodations for his new partner, even if they won't. Here's what you need to establish with your ex when they start seeing someone new:

Make sure that you and your ex are on the same page about your friendship. If either one of you think that there's a chance you might get back together in the future, you're going to want to get as far away from their new relationship as possible. Ask your ex why it is that they want you in their life. Make sure you trust their intentions and that you're OK with their answer. Some friendships aren't meant to last forever.

Without asking for too many details, try to get a good idea of their situation. You're going to want to know if this is a serious relationship, because if so, that might mean you need to rework your friendship to respect and work around the relationship.

If you're actually OK with it, suggest that you meet your ex's new partner. It might help them to see that you're actually friends, put a name to a face and minimize weirdness. Again, only do this if you have no romantic interest in your ex anymore. You don't want to be deceiving.

Think About It From Their New Partner's Perspective

You've been on the other side of this before, I'm sure. Think about how your ex's partner feels about your friendship. Don't let it dictate your life, but remember that dating code is important, and we've all been in each other's shoes before. The last thing you want to do is make someone feel insecure in their relationship when there's no need.

Know Your Own Boundaries

You're no longer allowed to just show up or call at all hours of the night. That's not your friend privilege, that's the partner privilege, so respect that. You have to make sure that they have space to do their own thing and that you're not crossing lines. And in the same regard, don't let your ex cross lines. You're no longer each other's lifeline.

While your ex might want to talk about their relationship from time to time, don't dig and don't pry. It's inappropriate for you to be getting involved in your ex's new relationship. Try to stay as far away from the details and curiosity as possible — it's safer for all.

Stay Away From Comparisons

Don't let your ex compare you to their new partner. You had totally separate relationships; you're different people and you should leave it that way. That kind of talk can be psychologically distressing and is totally unnecessary.

Be Willing To Take A Seat On The Bench

Your ex might be leaving a little bit too much room for you in their new life. If they're unable to see how the situation might be inappropriate, it's up to you to make the moves. Take a few steps back if you feel like the friendship needs some time to settle and reform. It's not goodbye forever.

Ask Them To Treat You As If You Had Moved On, Too

Just because you're not in a new relationship doesn't mean that they still get to occupy a big space in your life. Regardless of whether you've moved on, your ex should treat you with the respect as if you had.