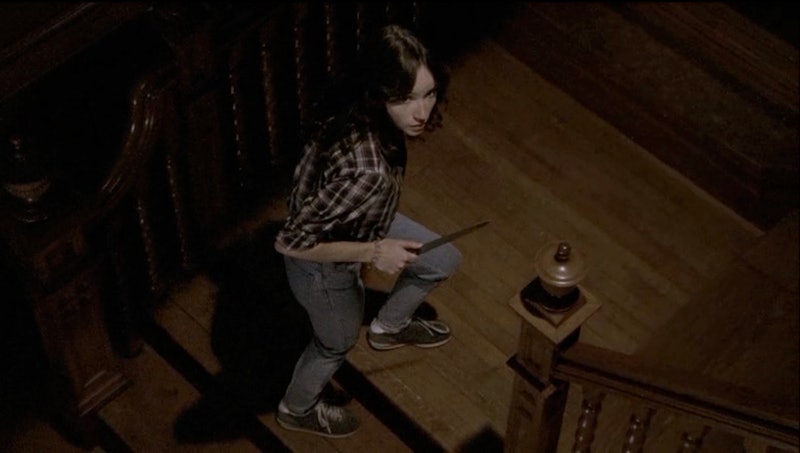 The aughts were an excellent decade for horror movies. It was the decade that gave the world Shaun of the Dead, 28 Days Later, Drag Me to Hell, and Let the Right One In — so it only makes sense that a few horror gems would get lost in the deluge of movies that would come to define the genre in its modern incarnation. Of all the overlooked '00s horror movies, though, none of them are as underrated as Ti West's The House of the Devil.

West is one of the most interesting horror directors working today. He is a true auteur who crafts his films from the ground up and The House of the Devil is his masterwork. Filmed with an '80s aesthetic so real you would be forgiven for believing the movie came out in 1989 instead of 2009, The House of the Devil taps into the Satanic cult panic that gripped the '80s with masterful results.

There is nothing showy about the movie, and that is part of the appeal. Its premise revolves around a college student named Samantha taking a babysitting job to secure enough money to move into a new apartment. The job is in a remote location far from town in a Gothic house even Vincent Price would have thought twice about entering. Even more unsettling is there is no child for Samantha to babysit. Instead, she is tasked with watching over the owner's sickly mother.

Things go about as well as you would imagine from there.

The House of the Devil shines with its commitment to looking and feeling like a product of the '80s. Anyone who has watched the horror classics of the era like The Changling or The Evil Dead will immediately recognize the film's brilliance. The House of the Devil did not want to merely be a film set in the '80s, it wanted to appear to be a lost classic from the decade. It achieves its goal on every level.

The film is a slow burn horror movie, far more interested in making you scoot closer and closer to the edge of your seat than it is in shocking you with nonstop jump scares. Jocelin Donahue imbues Samantha with a sense of normalcy and curiosity that makes her instantly relatable. You will want her to survive her stay in this strange house of nightmares even as survival begins to feel impossible in the movie's final act.

Thanks to Netflix's Stranger Things, the '80s have made a major comeback in 2016, and that should be good news for the chronically underappreciated The House of the Devil. Modern horror is too often about overloading the senses. The House of the Devil's old school approach to building a sense of foreboding is refreshing. You know something horrible is coming for Samantha, but you have no more insight into the situation than she does. The story demands not only your patience, but your investment.

The House of the Devil is clever in its commitment to the paranoia of the '80s. The film is at once a throwback and weirdly relevant in a year when everything old feels new again. If you have never had the pleasure of being disturbed by The House of the Devil then get thee to Hulu now. This is one '00s horror masterpiece that should be underrated no more.

More like this
Kimberly J. Brown & Daniel Kountz Looked Back On Their ‘Halloweentown’ Romance
By Stephanie Topacio Long
Anne Hathaway’s ‘The Devil Wears Prada’ Anniversary Post Turned Political
By Brad Witter
All The Sneaky Lindsay Lohan Movie Easter Eggs In Her New Ad, Explained
By Stephanie Topacio Long
The 'Hocus Pocus' Sequel Finally Has A Release Date & It Makes Total Sense
By Shannon Barbour and Radhika Menon
Get Even More From Bustle — Sign Up For The Newsletter