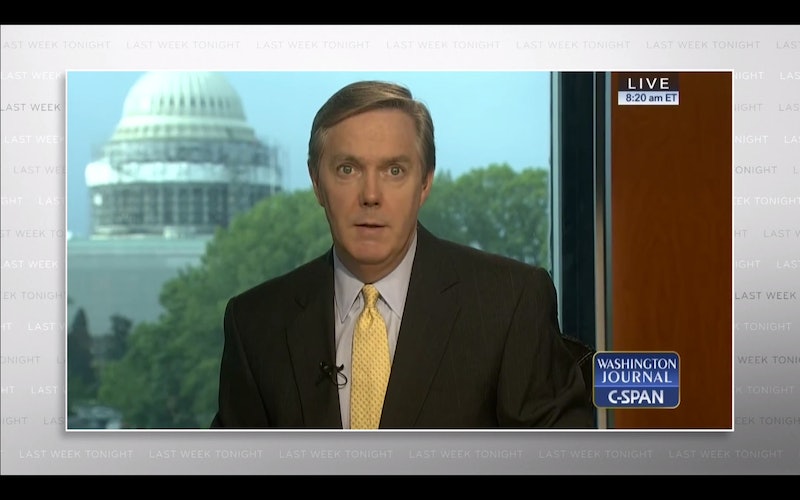 On Sunday evening, as expected, HBO's Last Week Tonight host John Oliver re-introduced his viewers to a man who will inevitably become one of your new favorite TV journalists. His face remains placid and understanding-seeming as his callers ask the most absurd, unrelated questions that, no doubt, must make him wonder when and where all rationality was lost. Most impressively, this man miraculously suppresses even the slightest smile or hint of laughter. According to Oliver, Steve Scully is the "Most Patient Man on Television" and if you haven't seen him answer questions on-the-air yet, you're in for a treat. And on top of being clearly patient, he's one of the most respected figures in the news media industry.

Scully is both a Political Editor and Executive Producer for C-SPAN, and he's also the host of the network's morning show, Washington Journal. The series, which first aired in 1995, primarily discusses legislation, as well as the news of the day. During the show, callers have the ability to dictate the direction of the conversation — a part of the series that Oliver has grown fond of including in his own show. If you're interested in keeping up on the fascinating rants and frustrating tangents Scully finds himself having to cut short by saying "thanks for calling," you can watch him host the Washington Journal from 7 a.m. to 10 a.m. ET each Sunday.

To close Sunday's episode, Oliver showed Scully sitting behind his desk, listening as "Steve from Haymarket, Virginia" described an alleged "process where you can burn virtually any carbon fuel you want to without producing any CO2." As the next minute drags on, Scully goes through a fictional ride through space and time that's as wonderful as any cat-in-space meme you've sought out in the past year. His head floats through the starry sky until a stag (that's very reminiscent of a patronus, by the way) beckons him back into the present. As that same caller explains how mirrors in Las Vegas burst into flames because "they haven't quite figured out that the earth rotates," it's time to move onto the next caller.

Oliver's gone above and beyond in establishing the fact that Scully is incredibly patient, but hiss career deserves just as much, if not more attention. After joining C-SPAN in 1990, Scully has been in charge of the network's White House coverage and has even served on the Executive Board of the White House Correspondents' Association. He was chosen by other members to be president of the association from 2006 until 2007. This year in particular, the Commission on Presidential Debates selected him as the "backup" moderator for each 2016 debate should a scheduled moderator be unable to attend any given presidential debate. After all, there's a reason Oliver's featured Scully's Washington Journal segments on his show since 2015. And as this election grows more heated, expect the call-ins to get that much wilder.