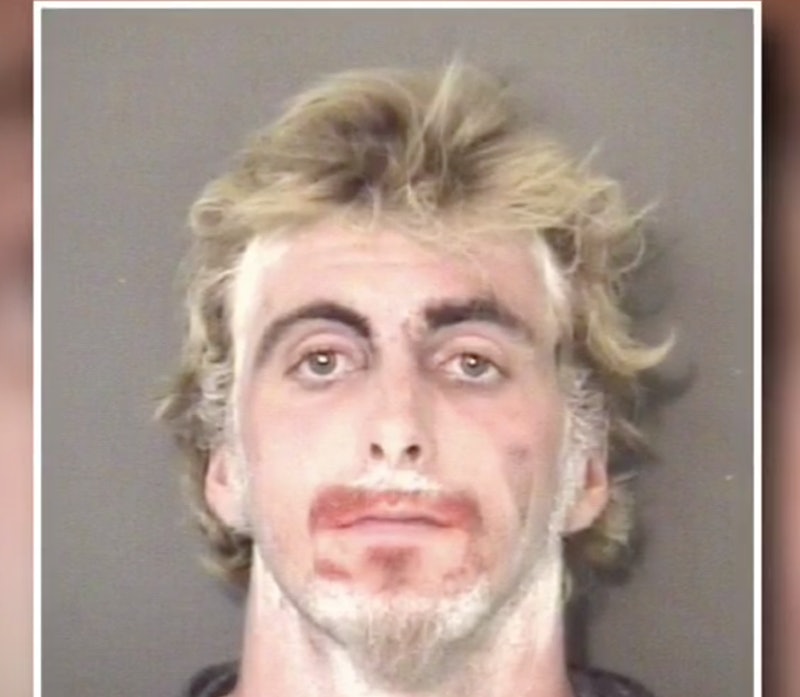 It must be approaching Halloween. Sure, clowns have been popping up for weeks around the country, but this terrifying clown mugshot brings the whole ordeal to an entirely new level. Little did you know the man beneath the clown mask — or even with a bit less makeup — the whole look could be that much scarier. Add the gray background of the police booking room, and you have yourself the poster for a remake of Stephen King's It.

This face comes to you from North Carolina, where the police were just as baffled to come across a clown as you or I would be. "Just seemed to be an urban legend but then we get the report of an actual person last night going into a store dressed with clown paint on his face," Tony Underwood, a spokesperson for the Union County Sheriff's Office, told local TV channel WCNC. "Just when you think you've seen it all you see something else that'll only surprise you," he added.

So what was this guy arrested for? No, not just for scaring people. After they received calls about someone dressed as a clown going in to a store in Indian Trail, a suburban town near Charlotte, the police went to investigate and they found 20-year-old Travis Quenton Pressley near the business. His clowning around is not illegal, but police arrested him for second-degree trespassing, possession of marijuana, and carrying a concealed weapon, a hatchet found in his backpack.

And I guess it was pretty scary. Charlotte news station WSOC reported that the clerk called 911 and told the dispatcher, "We have had a person come in dressed as a clown twice and he's starting to scare my customer. It looked like a joker face." The 911 dispatcher took the situation seriously, asking, "Are you or anyone else in immediate danger?" The clerk responded, "No." But the police went to find the guy anyway.

Underwood, the police spokesperson, made it sound like it was prank gone wrong. He explained to WSOC that the arresting officers asked what he was doing. "He told them he was on his way to scare some friends when he stopped in the store to get some cigarettes along the way. That's when he frightened the clerks and they called 911," Underwood told WSOC.

So the moral of this story would definitely be to rethink the clown costume this Halloween. Even playing a joke on your friends could wind up with you arrested, a true bummer for such a fun night of the year. With so many clown hoaxes this year, and so many people arrested, it just isn't that funny. And if you aren't willing to take my advice, consider this: Target decided to pull their clown masks given the ongoing scares. So you can't say you haven't been warned, both by me and a major American retailer.