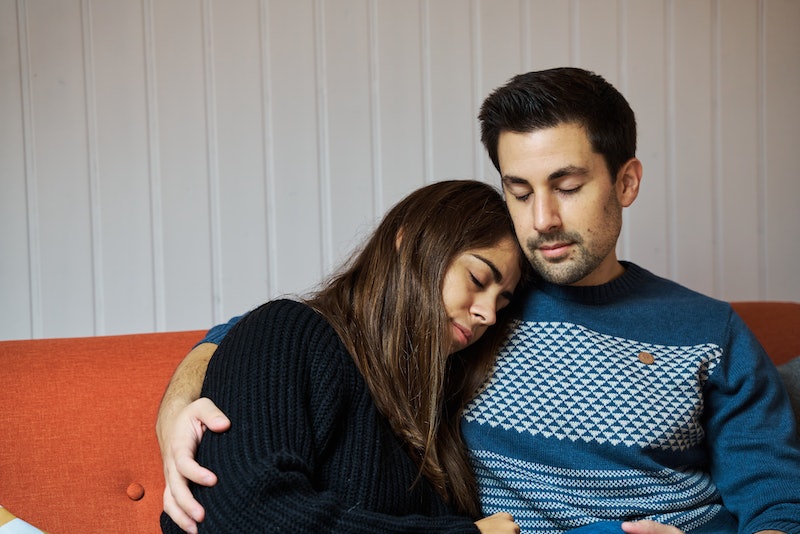 More than ever before, my friends who are dating are discussing different non-monogamous relationship options. People who I never expected to want a non-traditional relationship are now talking about opening up their relationship or being monogamish. It's definitely becoming more of a popular thing, but how many people are actually doing it? Well, a new YouGov poll of 1,000 adults aged 18 and over found that 11 percent of respondents had engaged in sexual activities with someone else with consent of their partner. So over 1 in 10 have participated in non-monogamy — and it's an even higher stat among younger generations.

"Society is changing and with it, the way we view relationships," Angela Jacob Bermudo, spokesperson for the open relationship dating site OpenMinded, tells Bustle. "Society has come to a point where monogamy is no longer the end-all, be-all when it comes to the things we value in a relationship or when measuring a partner’s commitment to the actual relationship."

I think it's great. Monogamy doesn't work for everyone and more people are finding the type of relationships that work for them. Of course, the difficult part is that it can add another deal-breaker into the dating scene. You both want kids, you both want to live in the same place, but if one of you needs monogamy and the other doesn't want it, you may have to admit that it's not a right fit. But all the better to know that up front. What was really interesting was to see the trends in different ages. Here's what the poll learned about monogamy:

1. Most People Say They Would Not Be OK With It

2. But More Younger People Are Into It

Seventeen percent of people aged 18-44 said they had had sex with someone else with their partner's consent — higher than the 11 percent average. They were also more likely to say they'd be open to it or that they might be depending on the situation, so younger generations are definitely less tied to monogamy.

"The younger generation leads the way when it comes to shifting these views; Formal dating is no longer the norm and they seek out more from relationships," Bermudo says.

If this many people are cheating, it seems those are mostly all people who would benefit from being in an open or polyamorous relationship, rather than doing it without their partner knowing. Isn't ethical non-monogamy a better option?

"[By] sharing stories from those that involved in the polyamorous community, we are able to de-stigmatize these relationships and inform those that are curious about the lifestyle," says Bermudo.