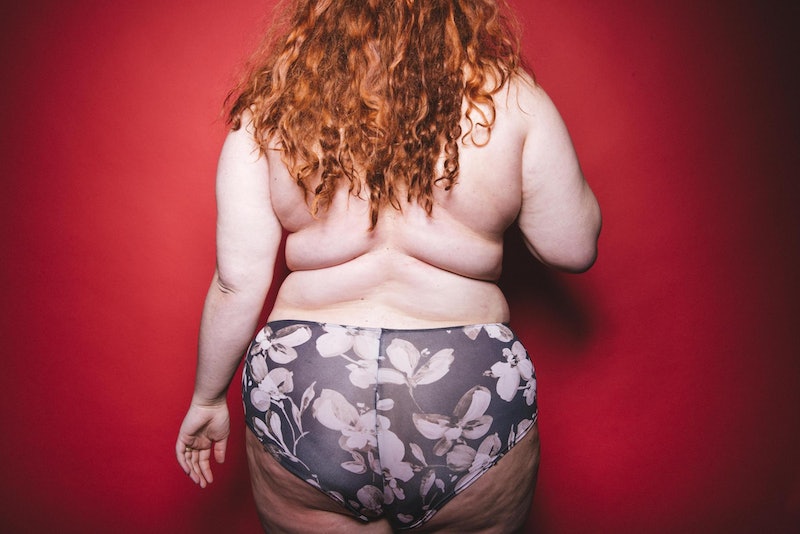 With the ever-increasing popularity of body positive rhetoric existing in cyberspace, more and more people are slowly arriving at the conclusion that all bodies are worthy of tolerance: The fat ones, the thin ones, and everything in between. Sometimes, however, it can be relatively straightforward to accept this truth as it applies to the figures of others, while remaining incredibly difficult to accept ourselves under the same kind of compassionate lens.

It's a phenomenon I've noticed when it comes to fat bodies in particular. Some plus size friends chastise their waistlines one second and celebrate the fatshion blogger rocking a VBO-baring crop top the next. It's for this reason that I believe it's crucial to take steps to actively like your fat, as opposed to passively tolerating it.

There's a distinct difference between being able to logically think, "Fat can be beautiful," or, "There's nothing wrong with being fat," when referencing other people versus thinking, "My fat is the effing bomb. I love my fat body," and actually meaning it.

For a while after my initial immersion into body positive and fat positive work, I looked at the images of self-identified fats in radical clothing and I told myself that I, too, could love my body. In fact, I started saying the words to myself often and writing them down in stories even more regularly. But it took a long while for them to be 100 percent true. Although I fully believed, by this point, that fatness was worthy of the same tolerance of thinness, the following tips helped me apply the same acceptance to myself so that I could actively love my own fat.

Oftentimes, we arguably see ourselves through a distorted narrative. For some, this isn't as serious as full-on body dysmorphia, but the images we see in the mirror can have the potential to derail our self-image nonetheless. This can happen when we see fatness staring back at us: A characteristic so socially condemned that there are million-dollar industries built on the fight to eradicate it.

If you find that the mirror is impeding your ability to love your body, my advice is to start with photographs. Selfies have been proven to help a lot of people on the body positive train, but I'd recommend letting another person shoot you as well. Sometimes, all it takes to see your fatness in a different light is to have a peek into the ways others might perceive it.

It's not to say that your self-worth should ever be strictly dependent on the opinions of others. But when we spend a lot of time believing, "My fat is ugly," it can help to see how beautifully another person captures it. They might see something in your rolls, stretch marks, and cellulite that you just haven't been able to see yet.

It's for this reason that I'd also suggest avoiding upwards-facing angles, or positioning of the body that's known to slenderize the figure. The process has been most helpful, to me, when I've allowed myself to just look how I look.

Even after more and more unapologetically fat women started blogging and sharing photos of themselves in fatkinis, crop tops, and hot pants, I felt pretty reluctant to treat my own body with the same kind of radicalness. It's not that I didn't want to. On the contrary, I longed to explore the limitlessness of fashion I'd heard about but never felt thin enough enjoy that freedom.

However, a crucial step in learning to think otherwise was to just go for it. Chances are that loving your fat isn't going to be the kind of journey that happens overnight just because you've seen one lingerie shoot of a fat woman exposing her love handles. But treating your fatness with love by decorating it is one way to get there a little faster.

I, for one, loved the discovery of body chains — particularly ones meant to bring attention to my fattest bits. I think it's safe to say that a lot of women and feminine people, especially, struggle to see the beauty of their tummies, and I was definitely guilty of this.

So one day, I decided to accessorize my stomach as I would my ears or neck. If logic told me that there was nothing shameful about a fat belly, then why must I hide or neglect mine? Slowly but surely, decorating it as I would a part of the body I was more comfortable with helped me appreciate its softness and wobbles.

3. Practicing Saying "I Look So Fat In This" Positively

Back in my days of perpetual body image angst, thinking that I looked fat in something had the potential to turn every shopping trip or morning in front of my wardrobe into a moment from hell. I knew that I was fat, but I wanted to convince the rest of the world that I wasn't. So that meant hiding my body to the best of my abilities via garments that I thought were flattering (aka slimming).

I don't believe that loving your fat can fully happen if the sight of said fat is constantly rejected, though. Once I started to embrace the idea that fatness is not deplorable or unsightly, a useful tool I found to better appreciate mine was practicing saying, "I look fat in this outfit," in positive connotations.

When shopping, for example, I'd seek out garments that showed off my rolliest bits, rather than ones that hid them. If an outfit made me look bigger than I actually was, I would try to revel in the look and point out the parts of my figure that appeared extra chunky and cute. I'd remind myself that it was OK to feel fat, because that's what I was. And like so many of those bloggers and fellow fat women I admired, it was OK if I looked fat, too.

4. Using The F-Word Often In Other Circumstances, Too

For me, actively loving my fat meant reevaluating every definition of the word I'd ever been presented with — i.e. greedy, lazy, ugly, unhealthy, intolerable, or shameful — and coming up with my own. Google told me that "fat" was simply a natural, oily substance occurring in animal bodies, and I decided to add to that "the soft, jiggly, adorable stuff covering my body and making me feel like a human pillow in the best way possible."

Once I came up with my own definition, calling myself fat on the regular felt hugely cathartic. So did calling other unapologetically self-identified fats by the same term. I'd started to reclaim the word (and the existence of fat on my body) in a way I hadn't previously thought doable. And the more I reclaimed it, the more I realized that my fat didn't have to prevent me from living my best life. If anything, it could become a tool in living that life: A way to explore writing and creativity and relationships with other likeminded people. What's not to love about that?

5. Incorporating My Chunks Into Sexy Time

I distinctly remember coming across issues of certain women's magazines when growing up that focused on "how to look like your slimmest, sexiest self in the bedroom." One such magazine was found at my OB-GYN's office, which in retrospect was just completely effed up and a total disservice to the many types of women frequenting said office.

The sad thing is, I know a lot of fellow fats who've tried to succeed at this task for the majority of their sexually active years. I was one of them, too. Hooking up (in any capacity) used to mean sucking it in, angling my face in such a way that my double chin would look smaller, and avoiding showing any partner the sight of my cellulite-y rear end. It wasn't fun, and it made any kind of sex feel like a really unnerving and body negative experience.

I wish teen me had come across a magazine that said something like, "Sex will almost always be more fun when you stop worrying about how your body looks and trust that the person you're getting it on with wants to see (all of) you nek-ed." Because, from my experiences, this has been undeniably accurate.

As I started believing that fatness had the potential to be beautiful and sexy, I started feeling braver when it came to revealing it in the bedroom. I'd let partners grab onto my love handles and kiss my tummy. I'd let them bite my double chin. I'd even let them play with my butt. And you know what? Sex got a lot more fun. Along the way, realizing that my fat itself could be part of the fun helped me love it that little bit more.

6. Wearing Something I'd Always Wanted To Wear

I'd argue that most fat people with an interest in fashion have (or have had) that one item of clothing that they've long wanted to rock the hell out of, but avoid like the plague for fear of looking fatter or being too visible. The notion of "taking up too much space" is one that plagues a lot of individuals who feel othered or marginalized for their bodies — and this undoubtedly applies to fat people who are regularly told that the physical space they take up far exceeds what they should be allotted.

When you wear loud or bold or rule-breaking fashion, you will most likely feel like you're taking up all the space: Like eyes are on you, and you're failing at being the good, wallflower-esque fatty you have been conditioned to be. Contrary to what fatphobic individuals might want you to believe, however, this feeling can be quite freeing if you want and allow it to be.

For me, actively loving my fat means refusing to apologize for it. It means wearing the horizontal stripes, the short shorts, the trousers that show off my visible belly outline, or the halter neck dress that exposes my chubby arms. Sometimes the attention I receive to these sartorial choices is negative, but it's also not my problem. Intolerance isn't something you need to cater to — and IMO, there's no act of self-love greater than realizing this with every pound of your fat body.

When I started blogging over four years ago, there were a solid amount of established fatshionistas doing their thing out there and inspiring the masses. In 2017, there are at least hundreds more. This means that the chances of you finding folks with body types much like your own are pretty high.

Sometimes, it's easy to see the beauty in fat bodies that don't remind us of our own: Ones whose shapes and proportions are different enough to ours that we can separate our body image insecurities with our appreciation for their figures.

But I think it's important to actively seek out the individuals who do remind us of ourselves: Whose bodies we can look at, admire, and celebrate, and who slowly make us do the same when we look at our reflections. If you can recognize, beyond a doubt, that the person you're looking at is totally badass and inspiring and lovely, then logic and sense should dictate that you are these things, too.

If all of this seems easier said than done, that's because it probably is. Practicing these tips usually isn't a one-time-deal or an immediate fix-all to aesthetic hang-ups. It took me a few years of incorporating each of these actions into my life on a regular basis for them to have tangible effects on my self-worth. But they all did, in time.

Through the help of all these small actions, I'm at a point in my life where I can thankfully say that I don't just tolerate my fat: I genuinely love it.