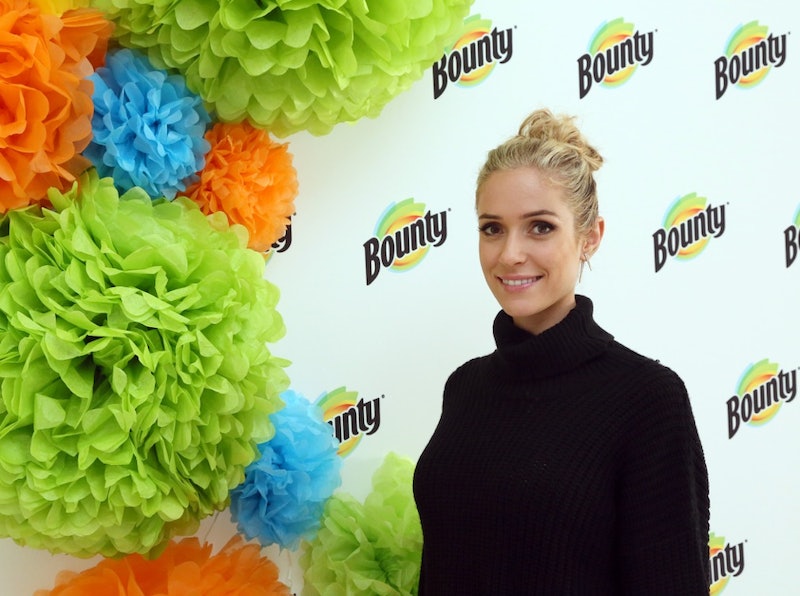 It's been 12 years since Kristin Cavallari made her TV debut on Laguna Beach. The reality star-turned-designer has been a staple in pop culture ever since. While she was known for getting caught up in drama with then-rival Lauren Conrad, the mom of three has come a long way since her MTV days. At an Oct. 13 event hosted by Bounty in NYC, Cavallari spills about her confidence as a parent. Oh, and she reveals whether she'll ever let her kids watch re-runs of Laguna. The verdict? She laughs and tells Bustle,

"When they’re 18, they can. Obviously they’re going to see it at some point. I can’t stop that. I'll have to have a serious conversation with them about it. Tell them, maybe it’s not the best light and Mommy wasn’t on her best behavior. But I’m totally cool with it."

Don't worry, she still thinks fondly of the show — at least to an extent. She's glad Laguna Beach captured some major teenage milestones. The 29-year-old says, "It’s cool because my graduation, my prom, all of those really special moments, are captured on tape and in a really cinematic way that most people can’t say they have." However, she's not digging through the archives anytime soon. Cavallari explains, "I still cringe a little too much when I watch it now, so one day, I know I’ll be very thankful for those."

Cavallari also commented on how she's grown since the 2004 series. "Who I am now has always been a part of me," she says. "MTV chose to focus on one aspect of my life. One aspect of my personality, I should say. Is it fair? No. But is it entertainment? Yes. So I totally get it." At least she understands the way the show was edited. And since Cavallari became a mother to Camden, Jaxon, and Saylor, fans have seen a softer side of her, which isn't actually new. She explains, "I did really come into my own and embrace being a mom. However, that was always inside of me. Just most people didn’t get to see that."

Speaking of being a mom, she doesn't have time for other people's nonsense. Back in July, Cavallari made headlines when she responded to and blocked commenters, who accused her of starving her children. Discussing the incident, she explains,

"Those kinds of things, because they’re so ridiculous, don’t bother me. Only because I’m so confident in what I’m doing as a mother. The mommy-shaming stuff, it’s the one thing that kind of goes in one ear and out the other."

Brushing off the drama is truly the best attitude. When the comments are that absurd, they don't even deserve the time of day.

For the record, she didn't expect the whole Instagram situation to blow up in such a big way. Cavallari recalls, "I thought I was kind of doing that under the radar." It turns out that was not the case. She didn't realize people read her comments so closely. She says, "Typically I wouldn’t have commented and I wouldn’t have if I had known that was going to blow up to the extent that it did. Only because I don’t care if someone thinks I’m starving my kids. I know that I’m not." Good for her for not letting Internet trolls get her down.

Even though she wasn't trying to cause a stir, her attitude against mom-shaming is admirable. And while she may cringe re-watching that old Laguna Beach love triangle, Cavallari's parenting moments like these are where she really shines.