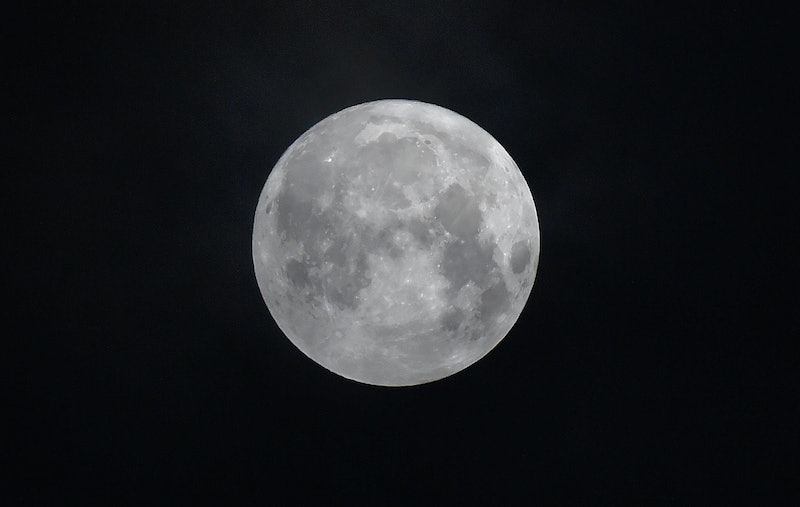 If you're a fan of star-gazing, you likely already know that 2016 has already been an awesome year for astronomy. We've gotten to see some amazing things in the sky, and it seems that more is on the horizon (literally) in the coming months. You might be wondering, for example, when is the next supermoon? After all, we just had a gorgeous supermoon in October. Luckily for us, there are actually two supermoons coming up before we wrap up 2016, so you basically have two bonus opportunities to catch sight of one with your very own eyes.

According to NASA, the first of the two upcoming supermoons will occur on Nov. 14; then second supermoon will happen exactly one month later on Dec. 14. Both supermoons are going to be pretty remarkable and unique from one another, so it's totally worth staying up both times if you can — but before we get into the specifics, it's good to review what a supermoon is.

The word "supermoon" isn't necessarily a scientific term; these seemingly larger-than-life moons are actually called "Perigee Full Moons." The most notable thing about these supermoons is that they appear up to 30 percent brighter and 14 percent bigger to us humans down on Earth. Why? Because they're super close to Earth, and therefore appear to be much larger than we're used to. As such, it's totally a good idea to get your camera ready if you're in a good viewing position!

So, now that we've reminded ourselves what supermoons are, let's determine what makes the upcoming supermoons so darn cool. As NASA explains, the moon on Nov. 14 will become full within about two hours of perigee, making it an "extra-super moon" due to its super close proximity to the Earth. Indeed, the November supermoon will actually be the closest the moon has been to the Earth in the 21st century so far; furthermore, NASA estimates that the moon will not be this close to the Earth again until November 25, 2034.

In terms of the last supermoon of the year, NASA explains that the Dec. 14 event will be noteworthy for a very different reason. This final supermoon of 2016 is basically going to eliminate any view of the Geminid meteor shower, which occurs on the same day. This will happen because the supermoon is going to be extra, extra bright, so the normally visible meteors will basically be a dimmed backdrop to the exaggerated moon.

As always, if you're going to star-gazing, it's best to avoid places with lots of competing lights, like tall buildings, and not a ton of pollution. And whether you're star-gazing solo, with friends, or with a partner, definitely make sure you bring a camera, a comfortable blanket, and some snacks! Might as well make some memories, right?

More like this
5 Ways To Help People Impacted By Hurricane Ian In Cuba & Florida
By Emma Carey
8 Completely Unserious Tips To Make Your Cuffing Season A Success
By Ginny Hogan
Here’s Your Daily Horoscope For October 7, 2022
By Mecca Woods
20 Non-Alcoholic Drinks To Serve At Your Halloween Party This Year
By Rebecca Deczynski, Mia Mercado and Alexis Morillo
Get Even More From Bustle — Sign Up For The Newsletter