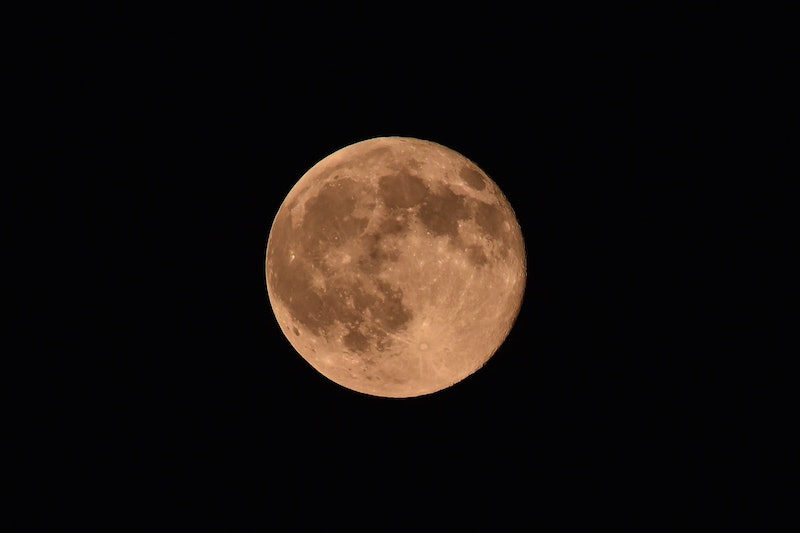 You’re probably already familiar with the fact that Blue Moons exist; at the very least, you’ve heard someone refer to a rare event as happening “once in a Blue Moon.” If you’re like me, however, you were unaware until very recently that Black Moons exist, too — and you are therefore wondering exactly what the difference between a Black Moon and a Blue Moon is. Taken together, they sound unfortunately bruise-like, but luckily there is nothing untoward about either of them.

First, it’ll help to have at least a basic understanding of the moon’s phases — and two phases in particular — so let’s start by going over those. As the moon orbits the Earth, what we see of it from the Earth’s surface changes. We call this progression of what we see “lunar phases,” of which there are four principal ones: The new moon, the first quarter moon, the full moon, and the second quarter moon. As the moon is moving between these four principal phases, we say that it is waxing crescent, waxing gibbous, waning gibbous, or waning crescent — that is, that it’s in one of its intermediate phases.

The two phases that concern us here are the new moon and the full moon. The first of the lunar phases, the new moon occurs when the Earth-facing side of the moon is entirely in shadow. Moonlight comes from the reflection of the sun’s rays off the moon, but during a new moon, the moon is positioned between the Earth and the sun — that is, the side that gets the sun’s rays just reflects them right back at the sun, preventing us from seeing the moon on Earth. Because it’s unlit, the moon just a looks like a big, dark ball from Earth during this time. During a full moon, however — the third phase — the opposite is true: The Earth is between the sun and the moon, allowing the moon to reflect the sun’s light back at the Earth completely. From Earth, we see a full circle of light in the night sky.

So, how do the Blue and Black Moons fit into this whole thing?

According to Space.com, there are actually two possible circumstances in which a Blue Moon might occur; the first is when four full moons occur in a single astronomical season, and the second is when there are two full moons in a single calendar month. As far as the first goes, astronomical seasons (of which there are four — spring runs from the March Equinox to the June Solstice, summer from the June Solstice to the September Equinox, fall from the September Equinox to the December Solstice, and winter from the December Solstice to the March Equinox) typically see three full moons apiece—except occasionally, when they might see four full moons instead. When this happens, the third full moon is referred to as a Blue Moon. The second situation, meanwhile, happens when two full moons occur in a calendar month; in this case, the second full moon bears the title of Blue Moon.

A Black Moon, meanwhile, might actually refer to one of any number of situations, according to Time and Date: The second new moon occurring in a single calendar month; the third new moon in an astronomical season of four moons (as is the case with full moons, an astronomical season typically has only three new moons); a calendar month that passes without a new moon, which can only happen in February, resulting in both January and March having two new moons each; or, a calendar month that passes without a full moon, which can also only happen in February, resulting in January and February having two full moons each. The current Black Moon is of the first variety — that is, it’s the second new moon to have occurred within a calendar month — with the first new moon of September having occurred on the first of the month, along with the annular solar eclipse.

So, knowing the different times we might refer to a moon as Blue or Black, here are a few ways they relate to each other:

The Black Moon is on a Friday night this time round, so why not make an evening of it? Head out into the hills. Bring a picnic. Watch the stars. Don’t watch the moon, because you literally won’t be able to see it. Have fun. What could be better on a crisp fall night?

More like this
The Summer Solstice Spiritual Meaning, Explained
By Jessica Booth and Brittany Beringer
13 Summer Solstice Quotes To Celebrate The Longest Day Of The Year
By Sadie Trombetta
Here’s Your Daily Horoscope For June 27, 2022
By Mecca Woods
Are Cancer & Cancer Compatible In A Relationship?
By Kristine Fellizar
Get Even More From Bustle — Sign Up For The Newsletter