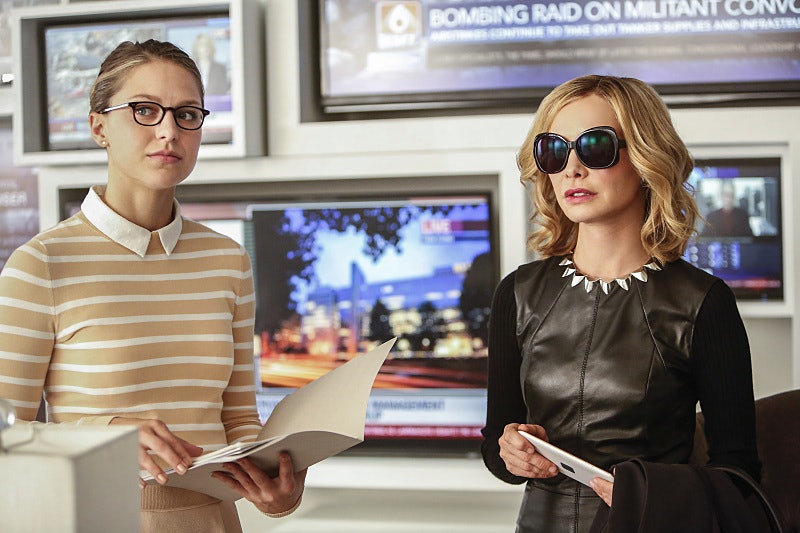 Monday's Supergirl had the first glimpse of Metropolis, Kara and Kal speaking to one another in Krypton, and an incredible team-up that involved Martian Manhunter and some impressive new tech from Winn. It was even more exciting than the Season 2 premiere. However, on the other side of the secret identity, Kara's journey of self-discovery has had some unexpected consequences. Cat Grant is taking a leave of absence on Supergirl and taking her own advice to leap into the unknown — but is she gone for good?

According to TVLine, Calista Flockhart is no longer a series regular on Supergirl, so her departure from CatCo is kind of the real deal. Since the show switched networks from CBS to the CW and is now filming in Vancouver instead of Los Angeles, it's natural that a few things have changed. However, she will appear in multiple Season 2 episodes. All is not lost. Since Cat promised Supergirl that she would be back, I don't think fans of her witty insults and feminist lessons have anything to worry about.

Kara now has to adjust to her new position as a reporter under Snapper Carr alone. James, on the other hand, is taking Cat's position for the time being. Things will certainly be different around the offie. I have to say though, if Cat never comes back, she had one heck of an exit. Two heartfelt pep talks for the price of one!

What's next for Ms. Grant? In DC Comics, Cat Grant has a daytime talk show in Metropolis. Wouldn't that be a fun way to check in with Kara's mentor? The world needs more Cat, and I have a feeling that she'll pop back up on Supergirl in one way or another before long.