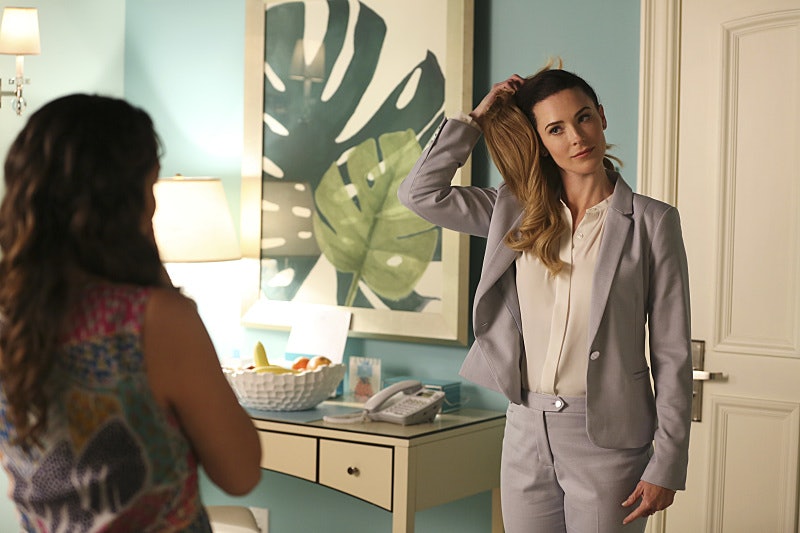 Rose was MIA for most of Jane the Virgin's Season 3 premiere, "Chapter Forty-Five," but she was certainly not forgotten. After Rose revealed herself as the ream woman behind Susanna Barnett, Michael's new partner, at the end of Season 2, she shot Michael in the chest and hurried off to reunited with Luisa. By the time Michael was taken to the hospital and the police arrived at the Marbella, Rose and Luisa were long gone. Rose disappeared on Jane the Virgin , but she hasn't gotten away with murder (or attempted murder, as it turns out) yet.

Nobody noticed Susanna/Rose and Luisa's disappearance on Jane the Virgin as police worked with Rafael and Petra (who is actually Anezka) to figure out who shot Michael at their hotel. It wasn't until the very end of the episode, when Michael woke up from surgery and named Susanna as his accuser just as Rafael overheard police talking about powdered sugar being found on the carpet near Michael's shooting, that Susanna/Rose emerged as suspects. Now, the authorities seem to be in the dark about the whole Rose being Susanna thing for now, but Michael was clear in accusing Susanna of shooting him and Rafael, remembering how Luisa kept powdered donuts because they reminded her or Rose, might have a lead on Rose. Could Rose have left her fingerprint on the vending machine when she went to get powdered donuts?

The episode ended with Raf and a couple of policemen heading up to the vending machines while Luisa woke up, disoriented, and found herself in a submarine with Rose, who promised her that she would get her happily ever after.

Rose and Luisa were able to get away, or so it seems, but Rafael and Michael could still bring Rose down. That is, if Rafael survives whatever Anezka and her evil mother have planned for him. After he told Petra/Anezka that he didn't feel a spark with her when they had sex the other night, Anezka pledged to her mother that she would carry out their plans against both Petra and Rafael. What that is, we simply don't know, but given the fact that Anezka is keeping Petra paralyzed and trapped in her own body, whatever she has planned for Rafael can't be good.