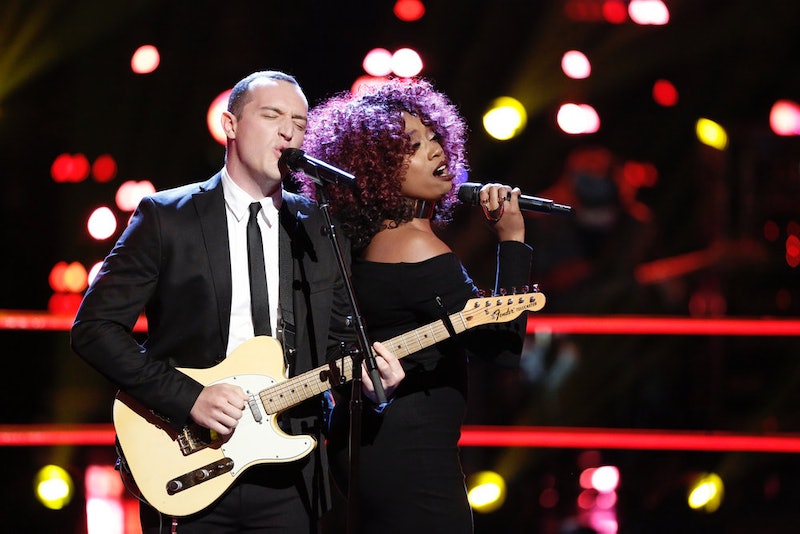 Now that's talent. In what had to be one of the best Battle Rounds in The Voice history, Team Miley artists Aaron Gibson and Sa'rayah battled it out to "I'll Take Care Of You." The performance was gritty, exciting, and all-around amazing. Seriously, these two should just become a duo act they sound so good together. But unfortunately, only one could come out victorious and that was Aaron Gibson. Thankfully, though, Sa'rayah was stolen by Alicia Keys—because there was no way either of these performers were going home tonight.

It really hurts when you have a battle so good that you don't want to see either artist go home. Both Gibson and Sa'rayah are what this show is all about—performance, professionalism, and crazy amazing vocals. They put on the show of the night and blew all of the coaches away. Seriously, it's crazy that Miley would ever pair them together—why would she ever want to lose either of these artists? They're both amazing at what they do and have an equal chance at taking the title. Ultimately, though, Miley did have to choose one. And she chose right. Miley chose to keep Gibson on her team because he could benefit more from her coaching. After seeing how far he came in just a few days, there's no telling where he might go under Miley's guidance.

Though it was a possibility that one of these talented artists would be sent home tonight, I'm so glad they didn't. And now they're both exactly where they need to be. Gibson will do great on Team Miley, while Sa'rayah will shine on Team Alicia. Both Sa'rayah and Alicia have a certain something about them that makes them extremely captivating to both watch and listen to. They have natural talents and that's why they're so perfect for each other. Alicia will bring out the best in Sa'rayah while also challenging her with songs that will push her outside her comfort zone. Both Gibson and Sa'rayah have a lot more to learn in this competition, and there's no denying that they'll be around long enough to live up to their true potential.