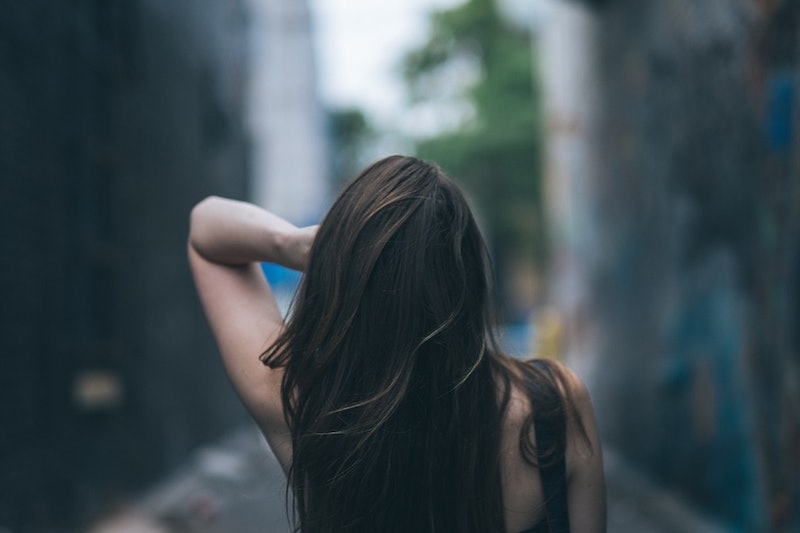 You wouldn't describe yourself as "angry." Never in a million years. As far as true "anger problems" go, you definitely don't show any of the classic signs. Sure, you get mad sometimes. But you never scream, or argue, or throw things. So how could you possibly have an anger problem?

Well, that's just the thing. Despite popular opinion, anger issues aren't only of the loud/screaming/throwing things variety. Sometimes the signs are a lot more subtle, and may even go mostly unnoticed.

Recognizing them, however, can mean saving your relationships, having an easier time at work, and even improving your health. As Dr. Michele Barton, of Life Well, says in an email to Bustle, "All anger is a problem or a sign there is an issue to be addressed ... If you work through and recognize this anger it could be very useful and lead to resolution. Conversely, if unrecognized, the ongoing anger will undoubtedly lead to a host of physical, social, professional, and psychological complications."

Clearly, it's worth it to recognize subtle signs of anger in yourself, so you can get back to feeling better. Read on for some clues it may be time to do just that.

1. You Feel Depressed All The Time

Your life is pretty darn OK, and yet you feel down all the time. This could obviously be a sign of depression, but it could also be due to anger problems. "Almost every depression has anger in it," psychiatrist Judith Eve Lipton told Liesl Schillinger on Oprah. It often shows up in the form of self-destructive behavior, like spending more money than you have, or not taking your job seriously. If this describes you, it could be that an anger problem is to blame.

2. You Feel Jittery Or Anxious

Your friends would describe you as "keyed up," and you definitely never feel relaxed. In fact, you've been starting to wonder if you have an anxiety disorder. While that could be, this constant fight-or-flight feeling could also due to be inner anger. "[The] fight-or-flight response is our nervous system responding to a perceived threat in the environment," Barton says. Sometimes, that threat is your very own body reacting to your anger. It can cause quite the unending loop of anxiety.

Lots of people are able to take criticism with a proverbial grain of salt. They view it as helpful advice, and learn from what went wrong. Angry people, on the other hand, tend to feel crushed when faced with criticism. "They are quick to get defensive and fire back at the person trying to help them," said professional therapist John Cordray on HuffingtonPost.com. Sound familiar?

When you're feeling angry, it will show outwardly — no matter how hard you try to hide it. Barton tells me you might have a clenched jaw, or shallow breathing. This is, again, due to that fight-or-flight response, and is often paired up with all sorts of physical complaints.

6. Sarcasm Is Your MO

There are different types of anger (volatile, chronic, judgmental) and they all have different symptoms. One kind, called passive anger, is where sarcasm comes from. "People experiencing passive anger may not even realize they are angry," noted an article on PsychGuides.com. "When you experience passive anger, your emotions may be displayed as sarcasm, apathy, or meanness." Passive anger is where your snarky, cutting quips come from. You know, the kind that are meant to be super mean.

Remember those physical complaints I mentioned above? Well, if you've ever been really angry, then you already know what I'm talking about. When under a lot of stress, the body will react with headaches, increased blood pressure, digestive distress (of all types), chest tightening, and head pressure, Barton tells me. It doesn't feel good, and is clearly not good for your long-term health.

8. You're Known For Holding A Grudge

While it's annoying to hear your partner say that you never let go of the past, they may have a point. Holding grudges is something we all do, but it's especially common in people with anger problems. As professional therapist John Cordray said on HuffingtonPost.com, "If you can’t forgive someone, and you constantly bring up the offense to tear others down, it’s a sign you have an anger problem."

This one is used by passive aggressive people the world over. It's the "I just want to help" tactic, and it isn't based in anything nice. According to Lipton, some of the subtlest forms of anger come in the form of excessive kindness. If this is your go-to, you might find yourself offering to make coffee because you're secretly furious none else bothered. Not very "nice" at all.

10. Nitpicking Is Your Favorite Pastime

When you're constantly feeling angry, it can be tough to not find everyone incredibly annoying. Think about how you have to say something when your partner puts the toilet paper on the wrong way, or how you hate it when the server puts ice in your drink. These nitpicking behaviors hide hostility under the guise of instruction, according to Lipton. It's also a form of redirected aggression. And clearly a sign of anger.

11. Everyone Is Calling You On It

Since all of these are subtle signs of anger, it may never occur to you have you have a problem. And yet, you might — especially if your loved ones start to notice. "If people close to you (friends, family, spouse, children) comment that you have an anger problem, then they may have a point," Cordray said.

If this lists describes you, never fear. There are things you can do — such as talking with a therapist — that can help cool off your anger. And the sooner you can do so, the better.