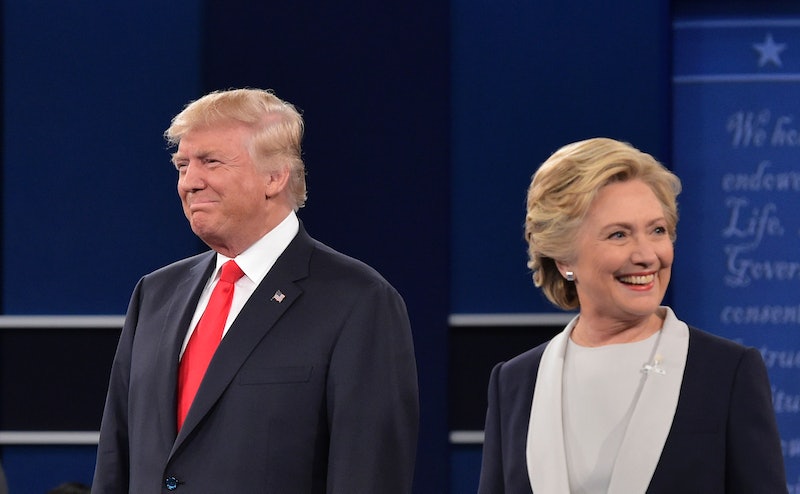 The presidential election wouldn't fulfill its potential if it didn't involve a good deal of ribbing, party disagreements, and political alienation. Even so, the 2016 election has taken the theatrics of political competition to whole different level than recent races. That may explain why there's been some historic shifts and schisms in voting demographics, including, as FiveThirtyEight noted, the largest gender gap since 1952.

The most recent live-interview poll conducted in October by FiveThirtyEight gathered and averaged the results of the latest polls from ABC News, CBS News, CNN, Farleigh Dickinson, Fox News, George Washington, Quinnipiac University, PRRI / The Atlantic, and NBC News / The Wall Street Journal, in which only Trump and Clinton are presented as options (no third-party candidates). The analysis by FiveThirtyEight revealed Clinton had a 20-point lead among women.

Now, combine that with the fact that more men are going for Trump (albeit not in the same numbers that women are breaking for Clinton), and the overall gender gap in voting grows. FiveThirtyEight's Harry Enten noted:

If the live-interview polls are on the mark, the difference between how men and women vote — the gender gap — in 2016 would be historic. Dating back to 1952, there has never been a 26-percentage-point gender gap.

There hasn't been such an extreme disparity between male and female voters since Republican Dwight D. Eisenhower and Democrat Adlai E. Stevenson faced off in 1952 — and that split featured opposite party affiliations. Women preferred the Republican Eisenhower at a margin of 16 points.

Throughout the whole election cycle, polls have revealed that women have preferred Clinton, but the numbers only grew after the recent release of a 2005 Access Hollywood hot mic tape, in which Trump bragged about non-consensual sexual behavior with women — including, most infamously:

The tape was released to the public right before the second presidential debate, and combined with the former secretary of state's performance, it appeared to help Clinton's polling numbers among both men and women.

Whether it's the wildly different economic polices of Clinton and Trump, their views on immigration, or their perspectives on Obamacare, it's clear the candidates have little in common, platform-wise. However, the straw that breaks the camel's back this election may very well be the different ways in which they approach women. We're in an election where on one side, we have our first female presidential candidate, one who supports reproductive rights and comprehensive parental leave policies. On the other side, there's a candidate who's facing sexual assault allegations and has a history of saying denigrating things about women.

Personality or policy preferences aside, it's hardly surprising the gender gap is so wide.